Yes, a Democrat Won a U.S. Senate Seat in Arizona!

1. Sinema pulls off the win. It's been nearly a quarter century since a Democrat won a U.S. Senate election in Arizona, but Congresswoman Kyrsten Sinema broke the Democratic Party's losing streak with her win against Republican Martha McSally in last week's midterm election.

Sinema didn't declare victory until nearly a week after the election, on Monday, Nov. 12, after steadily gaining tens of thousands of votes over McSally as counties tabulated the lingering vote-by-mail ballots that weren't tallied as of Election Day.

Sinema, the first Democrat to win a U.S. Senate race in Arizona since Dennis DeConcini retired in 1994, name-checked the late Sen. John McCain, saying she planned to "carry on Sen. McCain's legacy."

Sinema faced a barrage of hit ads throughout the campaign, but she successfully built a coalition of Democrats, independents and crossover Republicans. That play for the center carried her over the top.

McSally, by contrast, abandoned the centrist profile she'd built as a congresswoman during her representation of Southern Arizona. While on the campaign trail, McSally promised to challenge her own party's bosses when necessary, but once in office, she settled into a reliable vote for the D.C. establishment. And while she kept her distance from Trump in the 2016 election, she thoroughly embraced him in her Senate campaign.

As a result, she found herself losing ground with moderate Republican voters, particularly female voters disturbed by the president's rhetoric and actions. At an October GOP rally, she herself complained about her lack of support among moderates. "I mean, this is the insanity of what's going on right now, right?" she said. "If we just get Republicans to vote for Republicans then we are going to win up and down the ticket."

McSally may have had to go into Trump's corner in order to win her primary race, but that move—along with her repeated votes to repeal Obamacare and remove protections for people with preexisting conditions—killed her in the general.

To her credit, McSally didn't join in the Republican establishment officials claiming that the election was stolen.

In a concession speech posted on her campaign Twitter, McSally said she called to congratulate Sinema for winning a "hard-fought battle" and thanked her supporters, staff and volunteers.

"I wish her all success as she represents Arizona," McSally said.

The silver lining for McSally: Arizona Sen. Jon Kyl, who was appointed to office after the death of McCain earlier this year, may end up resigning in a few months, allowing Gov. Doug Ducey to appoint McSally to the Senate. If that happens, she'll have to run again in 2020 (the first regularly scheduled election after the filling of a vacancy and again in 2022 (the normal end of McCain's term).

2. The Blue Wave rolled through Arizona. There's no single definition of a wave election, and national pundits can argue whether last week's election was a Blue Wave. But in Arizona, three Democrats appear headed toward victory for statewide office as of the Weekly's deadline.

The tightest race was between Democrat Katie Hobbs and Republican Steve Gaynor for Arizona Secretary of State. Hobbs, a state lawmaker, had a slim lead of roughly 5,600 votes as of Tuesday morning, but the vast majority of remaining votes were in Maricopa County, where Hobbs was leading Gaynor by about 12,000 votes. If that trend holds, Hobbs could pull off the upset over Gaynor, a political newcomer who loaned his campaign $2.3 million of his own money (and raised just $212,000) in his bid for public office. Hobbs, by contrast, raised just $925,000 for her campaign as of mid-October and spent less than half of Gaynor's total.

If Hobbs wins, it's important for Democrats for two reasons: First, the Secretary of State oversees elections and Hobbs will likely be friendlier to voting rights than would Gaynor. Secondly, the Secretary of State is next in line to become governor, which means it's gonna be a lot harder for Gov. Doug Ducey to resign to seek, oh, a U.S. Senate seat, for example.

And in the race for two seats in the Arizona Corporation Commission, Democrat Sandra Kennedy was in the lead, followed by Republican Justin Olson, who was appointed to the seat about a year ago. Trailing in third place is Republican Rodney Glassman, who served on the Tucson City Council and ran for U.S. Senate as a Democrat. Glassman switched to the GOP when he moved to Scottsdale and ran a campaign promising to restore integrity to the Corporation Commission, but he showed he wasn't really interested in doing so when he ran a desperate, last-minute smear ad against his Democratic challengers, claiming they wanted "amnesty for everyone," "taxpayer-funded sex change operations" and "a new death tax"—all issues the Arizona Corporation Commission has nothing to do with. It was a disgraceful effort to shore up Glassman's struggling campaign. 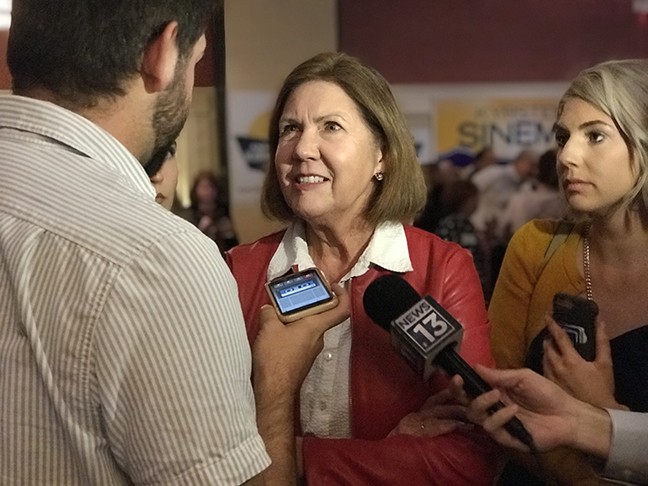 3. The Blue Wave rolled through Tucson. The most obvious evidence was in Congressional District 2, where Democrat Ann Kirkpatrick clobbered Republican Lea Marquez Peterson by 10 percentage points. This seat, left open by McSally's decision to run for U.S. Senate, is one of the most competitive in the country. Democrat Ron Barber won the seat by narrow margins twice in 2012 and lost it by a mere 167 votes to McSally in 2014. McSally won by double-digits in 2016. But this year, Kirkpatrick easily rolled to victory over Marquez Peterson.

In addition, Democrats picked up a seat in the Arizona House of Representatives when Republican Todd Clodfelter, who represented midtown Tucson's District 10, was knocked out by political newcomer Domingo DeGrazia. And for the first time since new districts were drawn in 2012, not a single Tucson-area seat went to a GOP candidate.

4. Republicans are willing to burn down the system if they lose. It didn't take long for Republicans to start calling the election fraudulent once it was obvious McSally was going to lose the Senate race. President Donald Trump tweeted that only election night results should stand and any votes counted afterwards should be tossed. Republican National Committeman Bruce Ash took to social media to claim election fraud without offering any evidence. And Politico reported that Trump and his allies were unhappy that McSally wouldn't take up the narrative that she had been cheated out of her seat.

In a clear effort at voter suppression, Arizona Republican Party chair Jonathan Lines called for county recorders to throw out ballots if the signature on the vote-by-mail envelope didn't match the one on file with county officials. Eventually, some county GOP organizations did pursue that legal action, but by the time it reached the court, they instead agreed to a settlement that allowed those county recorders to continue to check with voters to "cure" a ballot deficiency, as long as county recorders in rural GOP-leaning counties could do the same. The irony is: Those GOP county recorders could have always taken that step without going to court, but it was policy to toss those ballots into the trash.

The GOP tried to spin this as Democrats trying to stop rural voters from having their votes counted, but it was GOP officials who'd been disqualifying the ballots in the first place. Even Sen. Jon Kyl got in on the action, blaming Democrats for the action of elected GOP officials.

"Every single lawful vote in Arizona should be counted," Kyl said in a statement last week. "And voting laws in our state should be applied uniformly across the map. Unfortunately, the Democrats legal strategy sounds an awful lot like an effort to disenfranchise voters from eleven counties from rural parts of our state and that's troubling."

One can only hope that Kyl was flashing back to the time he lied about Planned Parenthood on the Senate floor and later retracted his comment, saying it was "not intended to be a factual statement."

5. Arizonans really care about public education. While the #RedforEd movement didn't manage to unseat Gov. Doug Ducey (who successfully managed to defuse much of its momentum by pushing for 20 percent raises for teachers by 2020 earlier this year), Arizonans registered their support for public education loud and clear with the rejection of voucher referendum Prop 305 by two-thirds of voters. This knocked down a 2017 state law that Republican lawmakers had pushed through to dramatically expand the use of Empowerment Scholarship Accounts to allow parents to receive big taxpayer subsidies for private and religious schools. Republicans had long been pushing for this law, but a ragtag band of education advocates managed the near-impossible feat by getting a referendum on the ballot and then persuading Arizona voters to shoot down the ESA expansion. Whether lawmakers will take another shot at it remains to be seen, but public sentiment on the matter was made clear on Election Day.

6. Big changes are coming to TUSD. Incumbent board member Adelita Grijalva and political rookie Leila Counts won the two seats up for grabs on the Tucson Unified School District Board. While it remains to be seen how Counts will vote, she unseated Michael Hicks, who had been the swing vote on many issues facing the district. Given what we know about Counts, she's more likely to side with Grijalva and fellow board member Kristel Foster, which probably won't sit well with the other board members, Mark Stegeman and Rachael Sedgwick.

7. Pima County voters don't like most taxes. Despite the constant complaints about Pima County's roads, 56 percent of voters rejected the county's request to pay for repairs via a bond package that wouldn't have even raised their tax rates. In addition, six out of 10 voters supported Prop 126, which bans the state, counties, cities and towns from implementing any new taxes on services that aren't now taxed.

8. Tucsonans like parks. Even though county voters rejected bonds for roads, 55 percent of city of Tucson voters approved a $225 million bond package to improve parks.

9. APS remains a major Arizona power broker. Proposition 127, which would have required the state's utilities to get half of their power from renewable sources (primarily solar) by 2030, was rejected by 69 percent of voters. APS was the biggest opponent of the initiative, pouring millions of dollars into opposing it. But APS could face some trouble with the new makeup of the Corporation Commission, especially if Commissioner Bob Burns becomes chair. The current Republican majority on the commission has largely done the bidding of APS and blocked Burns' efforts to find out how much the utility has been spending on elections, but the new majority could change that.

11. It's gonna get easier to hide donors to political campaigns. Prop 306 purported to be about keeping politicians from giving their Clean Elections dollars to political parties to run their campaigns, but there was a more sinister provision that was hiding behind that fig leaf: The Citizens Clean Elections Commission now has to have its rules approved by the Governor's Regulatory Review Council. This has been a battle quietly playing out behind the scenes as the Clean Election commissioners have been testing the limits of their authority to seek out the names of big donors to political campaigns who keep their identities secret by using nonprofits as the vehicle to run political ads. The Governor's Regulatory Review Commission can now assert its new authority to shut down that push for disclosure.