In 1966, this New Orleans legend scored his first gold record with the R&B classic "Tell It Like It Is" (the single reached #2 on the Billboard charts, behind "I'm a Believer" by The Monkees), launching a storied musical career. Aaron Neville has withstood the test of time. At the Fox Theatre. Neville will perform a set of doo-wop-inspired R&B, pop music and new songs as a duo with his longtime pianist Michael Goods... Residing in the sweet spot somewhere between melancholic and sunshiny—quirky guitar riffs and vintage synths float atop sparse drum machine beats—this Monterey, Nuevo León, pop duo have spurred a wave of '80s-indebted nostalgia. Guitarist/vocalist Coco Santos explains: "New bands inspire us, and older bands do too. It's a mix. We take some things, but it's not stealing. It's the art of stealing. It's research." Clubz and Girl Ultra are ready to burst with effervescence. At 191 Toole... Dress to impress. DJ NoirTech presides over the Risky Business '80s Dance Party: A night of nostalgia and the decade's best music videos. At Surly Wench Pub... "Tucson's answer to Chicago-style electric blues." Whose Blues are in the tasting room at Sand-Reckoner... The Amber Norgaard Band performs original pop-rock. At Monterey Court... With "Nowhere To Run," Atlanta rockers Fozzy will have you "Drinkin' with Jesus." At EncoreTucson... Brodie's Tavern offers three bands—Habitual Resonance, Phoenix's Killing Sunday and Amateur Palm Trees—along with "ice cold beer and no cover..." The Jacob Acosta Band smokes at The Elder Hookah Lounge... Raid Area 51 Party at Sky Bar finds DJs Plastic Disease and Mijito, like agents Scully and Mulder, setting on a course to explore the underground in search of the truth... Tracing back the roots of country music from the verdant trails of Appalachia to the gritty streets of Bakersfield, Freddy Parish hosts Dry 'n' Dusty at Exo Roast Co... Featuring pianist Yekwon Sunwoo, The mighty Tucson Symphony Orchestra returns with a program that highlights Beethoven's Symphony No. 7 and Piano Concerto No. 3. José Luis Gomez is at the podium. At the Tucson Convention Center... The R&B/soul will surely shake

Frontman Brian Hurd describes “Mornin’, Noon & Nite” as “a Hoodoo Stomper in the vein of John Lee Hooker. And is about one’s pure, savage lust for his or her lover.” Maniacally preaching the gospel, New York blues bashers Daddy Long Legs display their Lowdown Ways (Yep Roc Records) when they motor the “Death Train Blues” straight towards 191 Toole. Shooda Shook It warm up hearts and the audience… Eight years deep, The Annual Tucson Hip-Hop Unity BBQ—with performances by Da Sleepers Elite, ZCO, Benny Loc, Ill V, Jae Tilt, Yaqui B, Soul Point, Pariah Pete, Mastermind, Rey, Jalopy Bungus, Sinclair The Masked Zombie, DJ smashlames y mas—goes off at Rudy Garcia Park… Virtuoso violinist Beth Daunis, nylon string master Mark Wilsey and steel string psychobilly slinger Phil Lipman may provide “the link between the Old Pueblo and galaxies far, far away.” Reno del Mar fill the evening air with something other. At Sand-Reckoner… What better way to celebrate The Buffet’s 85 birthday than with the infamous Texas Trash and the Trainwrecks providing the tunes? A whiskey-fueled bacchanal filled with cowpunk and blazing rock ’n’ roll awaits. With Lost in the Sauce… Led by vocalist (retired Command Sergeant Major) Connie Brannock, Little House of Funk will take charge, filling the night air with R&B. At Monterey Court… “Committed to kicking ass and drinking beer,” Phoenix trash metallists Scattered Guts celebrate the release of The Wake, their latest contribution. At The Rock. Guardians, Stubborn Old Bastard, Total Failure, Blacklidge and Scar Eater provide the party favors… Paying homage to the music and culture, These Walls: A hip-hop art show. At and gallery. Jaca Zulu is behind the turntables… Like a summer monsoon, English bluesman Tom Walbank will leave you shaking your head in bewilderment wondering what just hit you. In the courtyard at Mercado San Agustin… The timelessly modern sound of The Paper Airplanes Project floats through the air. At Saint Charles Tavern… “The Grand Leveler,” rapper Apathy and Celph Titled roll the Paragraphs of Murder Tour into Thunder Canyon Brewstillery. With N.M.E. The Illest… Bifurcated, Half Full is an eight-piece band comprised of a string quartet and a rhythm section. They cherry-pick songs from a wide reserve—pop, jazz, and classical music—and various eras. At Exo Bar… Club Sanctuary resident DJs Plastic Disease and Black Flagg spin industrial/goth/electro/EBM. At the Surly Wench Pub… Boot stompin’ Tejano is what is in store at the AVA Amphitheater with Ramon Ayala Y Sus Bravos del Norte y otros… Spanning decades. With a catalog that includes hits like “Listen to the Music,” “Black Water” and “What a Fool Believes” these four-time Grammy Award winners have sold more than 48 million records worldwide. The Doobie Brothers are at the Desert Diamond Casino… 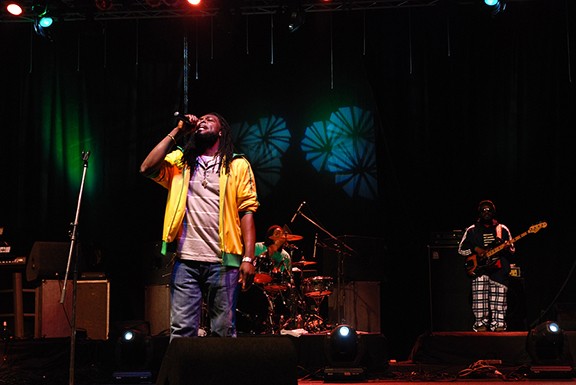 As frontman for Matchbox Twenty, this alt-rock vocalist lead the quintet to multiplatinum success with chart toppers "Push," "3AM," "Bent," "If You're Gone" and "Smooth," a collaboration with Santana, that Billboard ranks as the second most successful song of all time. Rob Thomas brings his Chip Tooth Smile to the Tucson Music Hall. With Michael Land... Her story is compelling. A life that includes being trampled by a horse and a car accident that paralyzed her right vocal cord. As a child Mary James practiced guitar, banjo and fiddle five hours a day. A wunderkind, she started performing on a daily Alabama TV show while in the second grade. Americana/bluegrass/folk artist Mean Mary returns to Monterey Court... As part of the Plaza Live! Concert Series Diane Van Deurzen & Lisa Otey entertain and boogie-woogie a tad. At St. Philip's Plaza... A tiny spark can turn into a blaze. Heeding A Distant Call, Philadelphia indie rockers Sheer Mag "Fan the Flames" with trash poppers Tweens at Club Congress. Backed by The Trees...

Rhythms thump with dynamism while their smooth vocal melodies entice like a siren call. This reggae band's sound simmers with enough Jamaican and Hawaiian spices to propel Marching Orders (Easy Star Records), their fourth studio album, to the top of the Billboard Reggae Charts for over 18 consecutive weeks. From Oahu, Hawaii, The Green will transport you to the "Land Of Love." At the Rialto Theatre... It is rumored that "The Sandman" Howe Gelb may show up and play the piano. At The Coronet... This installment of Ladytowne: A Tucson feminist talk/variety show features the comedy of Nicole M. Riesgo. The music of Mudpuppy. Interviews with Em Bowen, Joanna Lynne Smith (Tucson Benefest), Zaira Emiliana Livier (People's Defense Initiative), and Tara & Odalys of Mudpuppy and more. At Club Congress...

With the breeze of Ella Fitzgerald at her back, this Mexican singer/actress' debut album Mediocre (Warner Music, 2008) was anything but; it garnered a Grammy nomination, critical acclaim and a cult following. Her latest release ¿Dónde Bailarán Las Niñas? (translation: Where Will the Girls Dance?) is a deeply personal collection of songs that embrace themes of femininity and independence. "It's why I chose the title, because there's still a stigma attached to girls." Ximena Sariñana expands, "I want this record to be a soundtrack to that expression of freedom—which I also feel extends to the mystery of the nocturnal—when women can become goddesses of the night." Ximena Sariñana steps into the penumbra at the Rialto Theatre... Raconteur Billy Sedlmayr accompanied by slide guitarist Joe Novelli bring stories to life. At Tap + Bottle-Downtown... Americana singer-songwriter Nancy McCallion & The Scarlet Lettermen play the House of Bards... "The Dirty Old One Man Band," aka Scott H. Biram, is a blues-punk, country-metal musician, record producer, and ordained minister among other things. He shares a bill with punk-metal/bluegrass outfit Urban Pioneers and hillbilly swing act The Goddamn Gallows. At The Rock...