Kismet? Or a guiding hand? Blues legend John Lee Hooker introduced this duo. A kinship ensued. Their first collaboration, Get Up! (2018), resulted in a Grammy Award. Their latest release, No Mercy in This Land (Anti-Records), transforms emotions into music that feels both familiar and new. Ben Harper & Charlie Musselwhite will fill The Rialto Theater with Southern blues... Banned from mainstream radio for making harsh socio-political commentaries, O'Shea Jackson first gained notoriety as a member of N.W.A. This rapper's career was further catapulted after landing a role in John Singleton's Boyz n The Hood (1991). And that was just the beginning. Ice Cube at AVA Amphitheater... From Côte D'ivoire, roots reggae artist General Tchefary spreads irie vibes at Monterey Court... Doom metalists Bird Violence commemorate their last gig at Owls Club. With Dayak and Sunn Trio... The Marcus King Band bring their soul-influenced psychedelic southern rock to 191 Toole. With Bishop Gunn... Local legends George Howard Band are on the Playground rooftop... The Greatest Love of All pays homage to Whitney Houston at The Fox Theatre... Queens of Mariachi Yolanda Del Rio y Beatriz Adriana hold court at Desert Diamond Center... Xerocraft hosts an all-ages punk show with The Frecks, Feverfew and Rough Draft... Like glitchy interactive computer music? Smomid is at Galactic Center... Horror metalists Saalythic celebrate the video release of "Portal of Doom" at The Screening Room... Phen spins hip hop and old skool funk at Westbound. Bring your own cardboard if you want to get down... 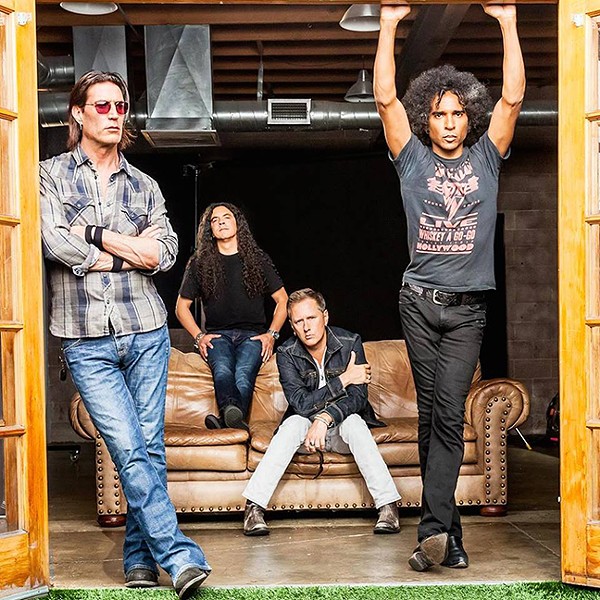 Armed with an acoustic guitar, soulful voice and a looping pedal, this one-man band is a folk mad scientist. Josh Glenn Experiment at Monterey Court...

From San Antonio, the groovy psychedelic tinged rock of MisterE at Cans Deli. With JuJu Fontaine and Cool Funeral... Street Blues Family continue their residency at Club Congress... Austin's The Schisms "Release the Bats" at Sky Bar. With Mission Creeps...

During the summer of 1992, singles "Hey Jealousy" and "Found Out About You"—penned by the late Doug Hopkins—catapulted New Miserable Experience (A&M) out from the dive bars of Tempe into the top 40. The Gin Blossoms are at AVA Amphitheater with Big Head Todd and The Monsters... Overcoming a turbulent past, rife with abuse and hardship, has fueled Monti's moody synth/electro pop. With Crystal Radio and Language Barrier at Cans Deli...

Freddy Parish and the Old Town String Band mark the release of Last Chance, a collection of American traditional folk music impressive in its authenticity and simplicity. Backed by Thøger Lund (bass), Nathan Fenoglio (banjo) and Matt Rolland (fiddle, mandolin), they succeed in transporting the listener back to Colonial America. Saturday, Sept. 1, at Exo Roast Co. Lend an ear: freddyparish.bandcamp.com


Tommy Will and Kato On The Track celebrate the release of Vomit (GLDN Artist Group). This six-song EP is scheduled to drop on Aug. 31. Available on iTunes, Apple Music and Spotify. Check out the video for "Harder to Breathe" on YouTube: youtu.be/C5q2N5bS-No

During the mid 1980s, jangle popsters River Roses were on the vanguard. Propelled by frontman Chris Holiman's songcraft and wholehearted vocal stylings The Rose's fan base grew exponentially. They flirted coyly with major labels, became darlings of the then-burgeoning Desert Rock scene and packed local venues: Nino's and a new joint, Club Congress.

Fast forward. Singer-songwriter Chris Holiman is releasing his third solo album. The Bittersweet Blue is a collection of 12 acoustic guitar-driven pop songs rife with retrospection. Ace guitarist Gene Ruley and trapsman/bassist Fen Ikner add their distinctive touches, deftly fleshing out the recordings. The songs capture a wistful romanticism while the songwriter daydreams about the folly of youth. From the vantage of wisdom, Holiman expands, "There is a conversational quality between the songs' narrator and a lost love. I did almost call it 'advice to my daughters.'"

Here are a few highlights.

Melancholic with a slight nasal tonality, reminiscent of Elvis Costello's work, Holiman pines on the truly bittersweet "Sarah." "If not me then someone else/We've all had our hearts broken/Had 'em stepped upon by boots and shoe." Holiman says, "I think of it as an older guy telling a younger girl you think you love me. But, honestly, you are too naive to realize this is not going to work."

On "Rush" Holiman reflects on the foolhardiness of youth with a sprinkling of irony, "We thought that we could never be broken/We thought that we were made out of steel/Eventually some of us did break down." Ruley's killer guitar riffs enhance the headrush on this down-tempo pop rocker.

In the vein of early '80s Squeeze with an infectious organ riff that surfaces delicately during the refrain, "Rain Again" tells of a chance encounter in a bookstore that turns romantic. We are left to ponder; Is it fate? Or, is it lust? Holiman holds his cards close to his chest, claiming that the song was purely an exercise in songwriting. "No real people. Just my imagination of a scene from a life." Perhaps, it really was "Nothing more than two strangers hiding from the rain." Best to just blame it on the rain.

The album was recorded intermittently over the course of years; the first tracking of instruments began in 2011. The project was gathering dust on a shelf until 2017, when producer/engineer Eric Westfall got involved. "He really made the songs sound finished," says Holiman. "So I decided to put it out." While exploring the vicissitudes of life, the opening track, "Peach," embodies the spirit of the album. "Life is a melody/None of us can get/We're sharp and we're flat/But we sing it just the same." The Bittersweet Blue is a garden. Sweet like a peach.

Chris Holiman debuts songs from The Bittersweet Blue in a solo performance at Crooked Tooth Brewing on Friday, Aug 31.

Smashing together dope beats with sentient lyrics, The Chronicles of Philander Brown & Nebula Black is a mashup drawing from identifiable points on the hip hop timeline: Outkast and Hieroglyphics Crew to Public Enemy and Grandmaster Flash. Yet, the album is imbued with a distinctive tang. Brody Ave. reflects, "Growing up here had a different personality." With a discerning eye, Aquafyde Boogey Bros. rap about life as they've experienced it.

Label mate James Ciphurphace weighs in. "The entire album is dope...It's original. You can't compare it to anything out there."

Brody Ave. set the backstory for "Tell Em" (which features Vern Love). "It's not the politics of America. It's how the people of the culture get the byproduct effect. "We're exhausted how you spittin'/How you cockin' 'em back/Wit goons on my lawn/Y'all false prophets gettin' on/The perception is that, it really doesn't look so hard now/And where were all these goons when Eric Garner was gettin' choked out?" Brody Ave. expands, "It seems, however, the people are more willing to resort to deadly force against one another. Than against what looks to be the 'Imperial forces killing off the young rebels' to the young black youth."

On "W.R.T.B (We R the Brothers), DJ Touch drops needle in a groove that could've come straight from '71's Shaft soundtrack. Aquafyde flow old skool. "We are the Brothers that rock your world/Aquafyde for you boys and girls/Boogey rules the air because we got dat funk." On this joint, the beat is the mothership. A call to surrender and dance. "Alvin Ailey meets MMA."

"5TwoOh" is a vignette depicting life on the gritty streets of T-town. Mexicans and blacks sidled up. Some are struggling. Others hustling. "I gotta get mine/You gotta get yours," Malik Nice spits. "My day begins with tortillas and beans.../Ladies and brothers and eses in some wingtips/Who ever sells the most dope is king of the trap.../Kids toting guns and pounds under a lot of stress." This is the place Aquafyde Boogey Bros. call home. "What do you know about the 520?" They ask. This is a tale from the darkside. Most will never know.

From the mean streets to the stripclub, The Chronicles of Philander Brown & Nebula Black is a slice of life in the Wild, Wild West.

The Chronicles of Philander Brown & Nebula Black is available on all digital formats. Check it out: aquafydeboogeybros.bandcamp.com/releases