GLDN Artist Group is throwing a birthday bash, hosted by DJ Ripdee, for local hip-hopper Tommy Will. With Jae Tilt and guests at Club Congress... It is safe to say that L.A.'s Koi Division, as the only fish-goth Joy Division parody band, have the market cornered. With Weird Night (Fullerton, punk), Lenguas Largas (post-punk/punkers) and Soda Boys (St. Louis, punk) at Cans Deli... The Rialto Theatre is the site for GrungeFest. An evening venerating the music of Foo Fighters, Nirvana, Alice in Chains and Pearl Jam. Featuring Fooz Fighters, Sliver, Allison Chains and Oceans ... Phoenix's Anarbor will "piss off your parents" when they bring their poppy, punky rock home. At 191 Toole with Silent Rival... The Determined Luddites, tonight featuring accordionist Gary Mackender, are dragging their knuckles on the patio at Johnny Gibson's. With singer-songwriter Dal Hodges...

At The Rialto Theater Wednesday, June 20

Shakey Graves—an alias acquired over a campfire during the Old Settler's Music Festival in 2007—standing alone and without house lights opened the set with "Only Son," a dark rumination from And the War Came (2014), Graves' debut album. "My heart was but a stranger/And its evil ways let me forget her/And this dirty blood will burn forever," Graves' voice solemn. Country gentleman swagger, a red suit and a pointed Stetson cowboy hat belie Graves' hard-won wisdom. At 31, Alejandro Rose-Garcia has had time for introspection. He followed with "Foot Of Her Bed." Graves emotes, "Night is to day as death is to dreaming/One thing I'll miss once I am leaving/Is you by my side every evening."

The band joined Graves for "Mansion Door," hitting their stride from the downbeat. Giddy up! All the while strumming his hollow-bodied electric, moved by the heavy backbeat, Graves broke into a little dance. "Shake it, Shakey," an elated female voice from the audience shouted out. Graves' was happy to oblige. By songs ends he had 'em singing along, "If you leave, please don't go far/I need the light of a lonely star/My one and only lonely star." In the shadowy Tom Waits-esque "Pansy Waltz," Graves pondered, "Well, I've never seen life as a chore/I've read the news/Abused the booze/And often wondered why/My smile remains?"

Afterwards, Graves tells the audience, "I don't write about myself. I write about a mysterious third person," grinning coyly. Puffy cotton ball clouds suddenly illumed the theatrical scenery of a cityscape as he expounded on the importance of self love. With lush harmonies, the band geared into "Excuses," off Can't Wake Up (2018). Contradicting himself, Graves sang, "I can't wait to fall in love/Excuses, excuses, excuses." After the coda, the band dispersed into the black.

Following a short pause, Grave's returned to the stage, ¾ acoustic guitar in hand.

Before segueing into a four-song solo set—turning the spotlight on "Big Bad Wolf," "Climb On The Cross" and the trance-folk of "Family & Genus"—he chatted with the audience: "This is the first time I've played in Tucson. It's kinda nice around here." He tells of the inspiration for one of his songs: Meeting a prostitute on a train, "Monique the Freak," and doing wicked things. Not sure if this was about that "mysterious third person," he referred to earlier or not. But the audience of approximately 850 fans ate it up. Graves once toured with Edwards Sharpe and Mumford & Sons as the official busker. He can work a crowd. He said wryly, "You've gotta do your thing while you still got a few teeth left." Stomping out the intro on his suitcase kick drum and tambourine, Shakey proclaimed, "I've got nothing but love for," before entering into "Counting Sheep."

With a tip of his hat, Graves returned with band in tow to lead this congregation of disciples to the promised land. An offshoot from the same tree of life that sprouted crossover artists like Dwight Yoakam, Shakey Graves is a little bit country, a little bit rock 'n' roll. On "Kids These Days," an anthem about wasted youth, the band rocked hard. "Dearly Departed," a sun-splashed harmony laden bluesy rocker co-written with Esmé Patterson, followed suit. Graves had the crowd amped clapping hands and singing along to a refrain, "Yeah, you and I both know/Ooh, ooh, ooh..." As the last chord hung in the air, Americana Music Awards Best Emerging Artist (2015), Shakey Graves expressed his gratitude. "Thank you guys for coming out to the show."

Given that it's sewn together with a thread of environmental consciousness, it's fitting that the themes offered for examination on La Cerca's latest release, Night Bloom (Xemu Records) are all about the wonders of nature juxtaposed with the erosion caused by systemic corruption. 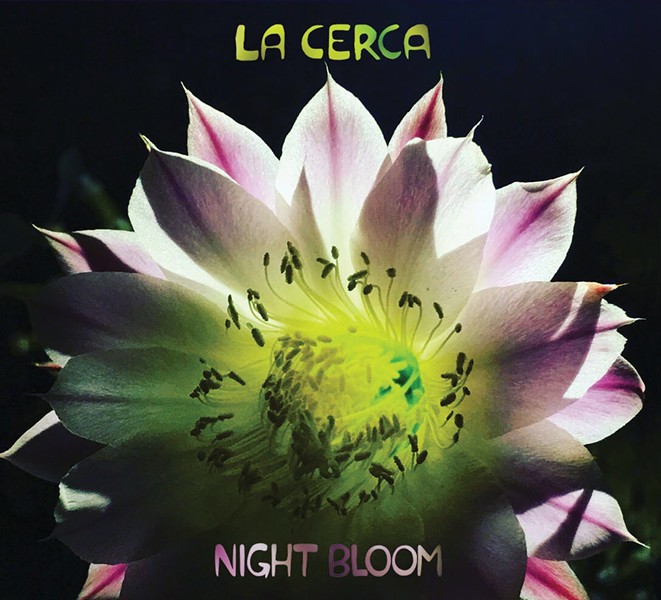 It's dark and loud. Decidedly, Night Bloom is less of a pop record than Sunrise For Everyone (2014), La Cerca's previous record. This album revels in the guitar.

"The pop elements have been exchanged for louder guitars," vocalist/guitarist Andrew Gardner says. "We wanted the guitars to express as much emotion as the vocals." To that end, they've succeeded.

The 12 songs that comprise Night Bloom were written over a long period of time. Although Gardner is the creative impetus for the songs, he gives credit to his fellow band members: "Every musician brings an essence."

Despite Night Bloom's darker aesthetic, there are bursts of color, instrumental flourishes and a cinematic feel. Here are a few highlights.

"Asteroid" starts with a tricky triplet picked guitar riff. The song's B-section, which functions as chorus, segues into a psychedelic-tinged guitar onslaught. Oberdick and Gardner create massive sheets of sustained sound that never seems to decay. The melodies they create have an anthemic quality: "That's just delays, modulation, fuzz and feedback." Once in orbit "Asteroid" is set on spectacular collision course.

"Tumbling Boulder" takes at aim at a value system that places profits over the health of our fragile ecosystem. "Atop a mountain, the earth shakes/A boulder falls, tumbling down.../Another drill in the ground, blood makes a fortune/Mountains move, horrid sounds." Gardner concludes, "It's the mad leading the blind."

"I Am The Song" is all about the layers. The lyrics set the tone. "O night time, you pause/Take a breath, feel the breeze cool down time/Look to stars, rest your thoughts/There you are, then a flash across the sky." The music bifurcates deftly, from pastoral beauty, before exploding into majestic power chording. The dynamics created by an incessant, airtight rhythm section and dramatic guitar interplay hold a certain Led Zeppelin-esque quality.

"Sunbathing" examines people's relationship to the sun. "Some people want to have tans and look golden. Others work on rooftops and are [baked] red by the sun." Gardner keenly sees a subtle division. In the chorus he ponders, "We can do better than this/What gives?"

"Well Wishers of Doom" is about seemingly well intentioned people holding each other back. "Underneath dark clouds, well wishers of doom/Floating in disguise, barricades built for you/Build a negative fire, in hopes the plan falls through." Gardner expands, "Believe in yourself. 'Well Wishers of Doom' want you to stay still and not take a chance."

'80s Kids! Featuring Belinda Carlisle, ABC, Modern English, Tony Lewis from The Outfield, Kajagoogoo's Limahl and Bow Wow Wow's Annabella, Retro Futura 2018 will "stop the world and melt with you" at AVA Amphitheater on Sunday, July 29... And finally, they too were huge during the '80s. The Psychedelic Furs float in on a heavenly cloud to The Rialto Theater on Tuesday, July 17. With Mute Swan...