Are CBD treats right for your pet?

Courtesy photo
When Lieutenant Dan was born nearly four years ago, his hind legs were full of necrotic tissue and he was destined for a life without back feet.

"There wasn't enough oxygen and blood flowing to them," said Melissa Sittler, one of Lt. Dan's owners. "One (foot) went missing and the other just peeled off."

Now, the small Australian Shepherd Dog mix—who's named after the beloved character from 1990s hit film Forrest Gump—hobbles about on two front legs and what's left of his hindlegs. The spunky ball of fur tends to stay near soft surfaces, like carpet, where he finds it easier to walk on his healed stubs.

Off the carpet, he dashes on his front paws, hind legs in the air, to the next soft spot in the room.

When Melissa and her husband, Chris, found out about non-intoxicating cannabidiol—better known as CBD—products for dogs, they decided to give it a try.

"We wanted to give it to him for pain management," Chris said. "That's a lot of us just assuming that he has pain, which I'm sure he does. You can just imagine that walking on the stubs hurts, which is why he does handstands."

After extensive internet research, Melissa found CBD-infused peanut butter for dogs, ordered a jar and started giving it to Lt. Dan and his sister, Opal, a 2-year-old Australian Shepherd Dog mix, for anxiety.

"(Opal) gets extremely excited and very anxious during car rides or when she hears loud noises," Chris said. "She constantly has this look of fear in her eyes, which is what she's got on right now."

The Sittler dogs are just two of many household pets across the country taking non-intoxicating CBD supplements.

And stats show CBD products for pets is a growing business.

In 2018, consumers spent $48 million on hemp-derived CBD products for their pets, according to New Frontier Data, a global analytics firm specializing on growth in the cannabis industry. By 2022, the data firm expects that number to grow to $298 million in industry sales.

With the pet CBD industry growing at such an alarming rate, Nicole Carillo, owner of Tucson dog boutique Rosie's Barket, said there's an overabundance of products for consumers to choose from, none of which are regulated by the Food and Drug Administration.

That's why she only offers one product she trusts enough to give her own dog, Rosie, who the store is named after.

"She's insane, she just wants to eat other dogs," Carillo said. "I did try this with my dog and it was like she was just chilled out. ... I'm definitely doing it again."

"It's taken me months, but I quietly got this after people had started asking me about CBD products," she said. "I do have concerns but that's why I put my trust in a company that's been animal-focused for over 20 years. ... The dog industry just feels like the wild west." 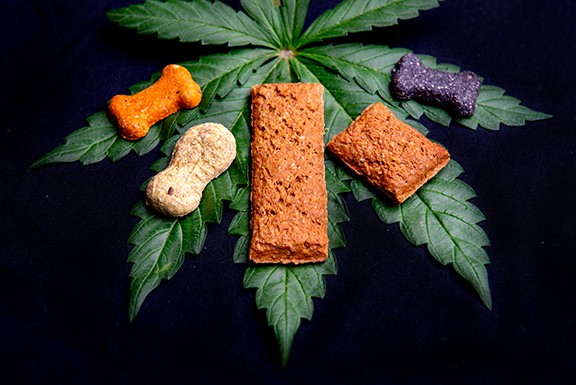 Dr. Michael Kaufman, a veterinarian at Desert Hills Pet Clinic and president of the Southern Arizona Veterinary Medical Association, said he doesn't recommend CBD supplements to any of his patients.

Other than a handful of small studies, the research, Kaufman said, isn't at a point where medical professionals can say CBD is safe for pet consumption.

"I have not been recommending it just because, even though CBD is no longer considered a controlled substance, that doesn't mean it's regulated by the FDA," he said. "If there are products claiming that there are therapeutic benefits, they are doing so illegally. I'm not saying that it doesn't have a therapeutic benefit but there are clinical trials that have to be done and approvals that need to be made to make a benefit claim, just like any other drug."

However, Kaufman thinks there's a place for CBD products for pets, only after adequate research is done to make sure they're safe.

"Veterinarians do have a strong interest and support for exploring the benefits of cannabis or CBD-related products but we want to have confidence in the efficacy in quality and safety of those products," he said.

For the Sittlers, CBD products are a "natural alternative" to traditional prescription drugs they could've received from their dogs' vet, which was one of the many reasons they decided to try CBD-infused peanut butter.

Melissa and Chris said, despite the lack of research on CBD pet products, they aren't worried about any adverse side effects on their pets. In fact ,they said it's a matter of time that pet CBD becomes part of mainstream medicine for animals.

"We've been moving away from pharmaceuticals and unnatural things and that's the thing that's attractive about CBD oil, is that it's derived from natural ingredients," Melissa said. "If you can use that for pain management, rather than something that's addictive or something that's bad for your liver, then why not?"