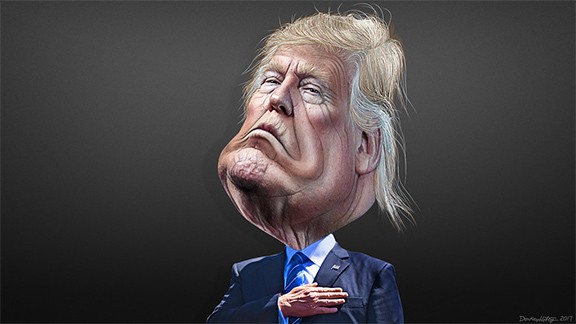 Here's something that many think but few state—the President of the United States is, mentally speaking, ra pidly falling apart before the nation's eyes. Could be reticence due to caution, maybe it's the slow-boil effect, but it's right there if you're looking. The pace has accelerated dramatically over recent months. Symptoms of disorder can be identified daily, from the obvious slowdown in his speech, to a frequent inability to access words (even off a TelePrompter). His Tweeting has become more unhinged and reckless, and his gait irregular. His pupils are always dilated, and he exhibits strange standing and sitting styles that suggest serious balance issues. In isolation, any given incident can be explained or dismissed. Cumulatively, however, the details of his unraveling are undeniable. As of now, these symptoms, which include characteristics that are more subtle but no less obvious to experienced observers, are leading a growing contingent of the commentariat to speculate, suggest, or straight-up state that Trump is suffering from a neurological disorder. Notably, there are those who believe that Trump will not be capable of running for re-election in 2020, and every day he goes without a neurological workup is a day of great peril for the country and the world.

It's true that Donald J. Trump—short-fingered, thin-skinned, vain idiot—has for most of his public life exemplified narcissism. Being such by itself is NBD—nearly anyone who seeks the spotlight or runs for (higher) office is definitionally pretty full of themselves. But since that fateful descent of the escalator in Trump Tower to announce he was going to inflict his defects on as many of us as possible, it's become apparent that he's DSM-V Narcissistic Personality Disorder made flesh. Woe unto all of us—turns out it's a terrible thing to have a malignant narcissist as President. Who could have predicted, aside from 65 million of us?

That would be—is—bad enough. But now imagine a scenario where, due to undiagnosed neurological disease, Trump is not mentally competent to discharge the awesome power that the POTUS possesses, specifically as pertains to nuclear weapons? What if everyone around him is either too corrupt or craven to intervene? What happens if he decides to put an "end" to the conflict in Afghanistan with a nuclear response (which he strangely alluded to in July) in a moment of sundowning? Or he threatens Iran with an attack? And what if that bellicosity grows worse due to this condition? This very real threat is a significant part of why any president gets an annual physical that should include a thorough neurological workup, but in Trump's case, there's ample reason to believe the process has been corrupted. (See Dr. Ronny Jackson's absurdly and dishonestly glowing assessment from his 2018 physical, after which Trump tried to make him VA Secretary.)

Some psychiatric professionals have been pursuing this beat during Trump's presidency, but most have been hamstrung by the so-called 'Goldwater Rule,' wherein the profession informally agreed to refrain from anything resembling diagnosis of a person that they haven't themselves examined. A few, however, have made a compelling case about the need for (at minimum) testing, while not offering a specific diagnosis. We need to know whether Trump is fit for duty, and Yale psychiatrist Bandy X. Lee has been at the vanguard of a cohort of psychiatric professionals who have been adamant about the importance of immediate neurological examination of him. Unfortunately, this "Dangerous Case of Donald Trump" (the title of their book-length collection of analyses) has not penetrated the bubble of mainstream White House coverage groupthink.

That seems to be finally changing. In the wake of Trump's recent clear malfunction (Greenland, Space Command Rose Garden Speech, Chosen One, ad nauseum), the awareness that there's something neurologically wrong with Trump is spreading. CNN's Daniel Dale, who has exhaustively catalogued Trump's lies, as well as Aaron Rupar of Vox, have diligently documented Trump's public appearances, press sprays, and rally speeches, and have lately noted the malfunctions more prominently. From the ranks of NeverTrumpers, some of whom presumably in possession of insider knowledge, concern has ramped up. MSNBC host (and former Bush Jr. comms director) Nicole Wallace discusses it nearly daily; George Conway, Republican lawyer and spouse of notorious Presidential adviser Kellyanne Conway, has popularized hashtags like #TestTrumpsMind; former Congressman Joe Walsh has announced his own campaign for the Republican nomination; Anthony Scaramucci has flatly stated Trump won't make it to March 2020 before dropping out. Nikki Haley has had to Protest Too Much about her respect for VP Mike Pence due to speculation that she might replace him on the ticket in case Trump falters. They've all, save Haley, pointed out that Trump's public behavior would have cost him his job in every other imaginable endeavor.

The most fascinating analysis that is now making inroads into the public consciousness is offered by Tom Joseph, a Chicago-based tech and finance businessman, who has gained a sizable Twitter following due to his cogent and insightful documentation of Trump's ongoing dementia-related breakdown. Joseph's bona fides come from being the caregiver to both parents and a sibling as they were lost to the inexorable devastation of frontotemporal dementia and Huntington's disease. He began making this case to friends via email in 2015, and started posting about it on Twitter in February 2017. While space does not permit a deeper dive into Joseph's extensive and acute observations, he notes that dementia is unrelenting in its depredations, and it's only a matter of time before the truth of Trump's disintegration will be impossible to deny. Joseph has credibly and repeatedly opined that there is no way Trump will be the Republican nominee for president in 2020. While this seems like unalloyed good news to those of us not indoctrinated into Cult 45, who knows what that might ultimately mean in terms of how the election plays out? Better hold on to your butts.