Artist Papay Solomon was still in his mother's womb when she fled her native Liberia.

The year was 1993 and a war was raging; the desperate mother gave birth to her baby in nearby Guinea. When Solomon was five, the family moved again, this time to a refugee camp. He spent nine years of his childhood in the sordid camp. Finally, when he was 14, after years of scrutiny and vetting, the family was permitted into the U.S.

His story is all too common in a world where some 70 million refugees have been forced from their homes and countries by violence, government corruption, climate change and poverty. But lately Solomon's story has turned extraordinary.

In 2018, he graduated from Arizona State University with a bachelor's degree in fine art and won an artist grant from the Phoenix Art Museum. That same year, down the highway in Tucson, he was a star of the competitive Biennial show at the Tucson Museum of Art. Not only did he win TMA's Erni Cabat Award, his gorgeous self-portrait, splendid in African colors, landed on the cover of the Tucson Weekly.

Now the UA's Joseph Gross Gallery has awarded him a solo show, African for the first time. In the new works on view, the accomplished young artist, turning 27 this year, investigates his own multi-national identity and that of other immigrants living in the African diaspora. One painting, for example, portrays a young woman living in America and proudly wearing a cape in the brilliant colors of African textiles.

Solomon gives a free artist talk at 4 p.m. Thursday, Feb 13, followed by a reception from 5 to 6:30 p.m. The show is up until March 10 in the Joseph Gross Gallery on the UA's arts' campus. art.arizona.edu/resources-facilities/galleries/.

Solomon is by no means the only artist on Tucson's spring art season whose work art illuminates the lives of people considered "the other." Multiple galleries are laudably showing works created by artists from around the world—a very welcome trend in these xenophobic times.

Over at MOCA-Tucson, Iranian-American artist Amir H. Fallah is working terrain similar to Solomon's. Born in Tehran in 1979, he studied art in the U.S., first earning a bachelor's at the Maryland Institute College of Art, and then and moving on to UCLA, where he earned an MFA in painting in 2005. Since, he's shown work around the U.S. and in the Middle East.

Like Solomon, Fallah "straddles cultures," merging his painterly western art skills with cultural references to his first country. He follows the western art tradition of painting on canvas, but delves into the "pattern-based visual language of Islamic art." Through May 3. moca-tucson.org.

Challenging as it must be for Fallah and Solomon to navigate their dual identities, their arts are made all the richer by their exhilarating by cultural blends. A show at the Tucson Desert Art Museum demonstrates that even artists born and raised in the U.S. deal with multiple cultural aesthetics. In Art is the Seed: Contemporary Native American Female Art, native women use contemporary techniques in their paintings, prints and photographs, while weaving the craft traditions of their forebears into their works.

Marla Allison, of Laguna Pueblo, for instance, relies on traditional pottery designs in her up-to-the-minute paintings. Navajo artist Darby Raymond-Overstreet, born in Tuba City, makes digital art and prints inspired by Navajo textile designs going all the way back to the 19th century.

A second exhibition at the museum, The REDress Project by Métis artist Jaime Black, addresses the rash of murders and domestic violence crimes perpetrated against native women. Black has arranged empty red dresses in an installation that evokes the "presence of absence." Both shows are up through May 31. tucsondart.org

Eight artists from the art-rich city of Oaxaca, in southern Mexico, are exhibiting luminous works at the Bernal Gallery at Pima College West Campus. Arte Contemporáneo de Oaxaca is a sumptuous gathering of paintings, mixed media and photography, all very welcome at a time of when Mexicans are so maligned in the U.S.

The fresh new works are bold and contemporary, but they're also inspired by folkloric traditions and indigenous art. One standout work is a print by Enrique Flores, with Mexican faces illuminated against a starry sky.

On Thursday, Feb. 13 at 5 p.m., Nancy Mayagoitia, a Oaxacan curator, will give a free slide lecture at Pima on the art of Oaxaca. Exhibition artist Cecilia Salcedo will discuss contemporary Mexican photography. Reception follows. Through March 13 at Pima. Pima.edu/cfa. Additional images by the artists are up at the Tucson International Airport through April 3.

At the same time, the Tucson Museum of Art is showing folk art by indigenous artists from Oaxaca, a state renowned for inventive painted carvings. The TMA's large collection of these works is courtesy of a donation by collectors Vicki Ragan and Shepard Barbash. Through Aug. 9. tucsonmuseumofart.org.

Also at TMA, in The Place Where Clouds Are Formed, viewers will see a photo of Quitobaquito, a cherished spring on the traditional lands of the Tohono O'odham. That rare desert oasis is now threatened by ongoing construction of the border wall alongside Organ Pipe Cactus National Monument, where contractors are pumping ground water to make cement. Meantime, the reservation proper is dealing with a Border Patrol occupation.

The museum installation—with photos by Amber Lee Ortega and Gareth Smit, poetry by Ofelia Zepeda, pottery by Reuben and text by Martín Zícari—investigates these issues as well as migration and community on O'odham land. Through Aug. 9

The Arizona State Museum also jumps into the wrenching issue of border walls in the traveling show A History of Walls: The Borders We Build. The hated Berlin Wall was demolished years ago, but other walls are now being built or are already up in place in many parts of the world: between Israel and the West Bank, for example, and between the U.S. and Mexico. March 5 to May 9.

And in a joyous note, Raices Taller uses art to celebrate the festival of ¡Carnival!, a holiday that welcomes all peoples. Marking the last day before Ash Wednesday and the solemn days of Lent, it’s celebrated in Europe, Latin America and, by a different name, in New Orleans. Carnival/Mardi Gras/Fat Tuesday, Ash Wednesday falls on Feb. 25 this year. Through February. raicestaller222.

Of course not every art space this season is devoted to global sorrows or joys. Plenty of exhibitions are about pure beauty, or art history, or landscape. Remember that not every exhibition in town can be listed here. Please check out Tucson Weekly’s calendar to keep up on the arts all around town. Among the most beautiful shows is Pure Abstract at Davis Dominguez. Local painter Joanne Kerrihard fills the big walls with gloriously colored oils, their splashy lines of pink and yellow and blue and green dashing merrily across the canvas. Colorado’s Amy Metier has created charming painted collages, with crayon-colored squares of paper lined up in alluring patterns. Get thee to the gallery quickly: the show ends Feb. 29, and the gallery itself closes permanently in mid-June.

Before it does, you can see a figure show with paintings by Jan Olsson and Bailey Doogan, and sculpture by Judith Stewart (March 3 to April 25), and a grand finale with abstract paintings by Josh Goldberg and sculptures by Joy Fox (May 1 to June 13). davisdominguez.com

Chief curator Julie Sasse will launch Southwest Rising: Contemporary Art and the Legacy of Elaine Horwitch on Feb. 29. The exhibition and an accompanying book of the same name are the results of years of research by Sasse, who once worked in Horwitch’s galleries.

A champion of Native American, Latinx and contemporary art Horwitch was a major arts figure across the southwest from the early 1970s unto her death in 1991. She ran galleries in Scottsdale, Santa Fe, Sedona and Palm Springs, where her embrace of “pop western” led to her nickname, Annie Oakley of southwest art.

Back in the 1970s, when photography was still struggling to be accepted as a true art, Harold Jones ran a photo space in New York fittingly called the LIGHT Gallery. One of the first venues to specialize in photography, LIGHT showed such influential artists as Harry Callahan, Aaron Siskind and Frederick Sommer.

In 1975, Jones moved on to the Center for Creative Photography to become its first director, but LIGHT soldiered on until 1987. The Quality of LIGHT, a comprehensive exhibition at the CCP, tells the story of this influential gallery in photos, film and audio. Selected contemporary photographers who are carrying on the LIGHT aesthetic are also included. Through May 30. Ccp.arizona.edu

Another photographic exhibition, Land Re-Form, at Etherton Gallery, features three renowned photographers who investigate changes in the land—and the part humans play in altering it. Frank Gohlke exhibits haunting photos of Mount St. Helens, where a disastrous volcanic eruption in 1980 killed 57 people and laid waste to the mountain. Making five visits over the years to capture the splintered landscape in photos, Gohlke learned that the logging business had a part to play in the disasters.

Mark Klett writes that he seeks out the chaos in nature, photographing random gunshots, abandoned toys and tire tracks. Michael Berman, in his series Perdido, ranges across the border line, capturing desolate spaces where ranchers, narcos and wild animals dwell.

In the gallery’s pop-up space, Michael Mulno displays photos of the built environment. Through March 14. Ethertongallery.com

The Arizona State Prison system has a condescending name for art-making: they call it hobby craft. Inmates need to earn the privilege to make art and their materials are limited. They can start out with paper and pencil and, if their behavior is deemed good, they can move on to watercolor and even acrylics.

Despite these limitations, some prison artists make marvelous art, as the show Hobby Craft at University of Arizona Museum of Art attests. Among the offerings: a loving and lovely portrait of a baby girl all in pink; a shadowy vision of a roadway through a forest; a masked Day of the Dead-like figure who implores viewers to “Enjoy Life.” Through March 29. At 4 p.m. March 19, Dr. Marcia Klotz, a UA prof who directs a prison education project, and museum curator Olivia Miller will speak about the work.artmuseum.arizona.edu 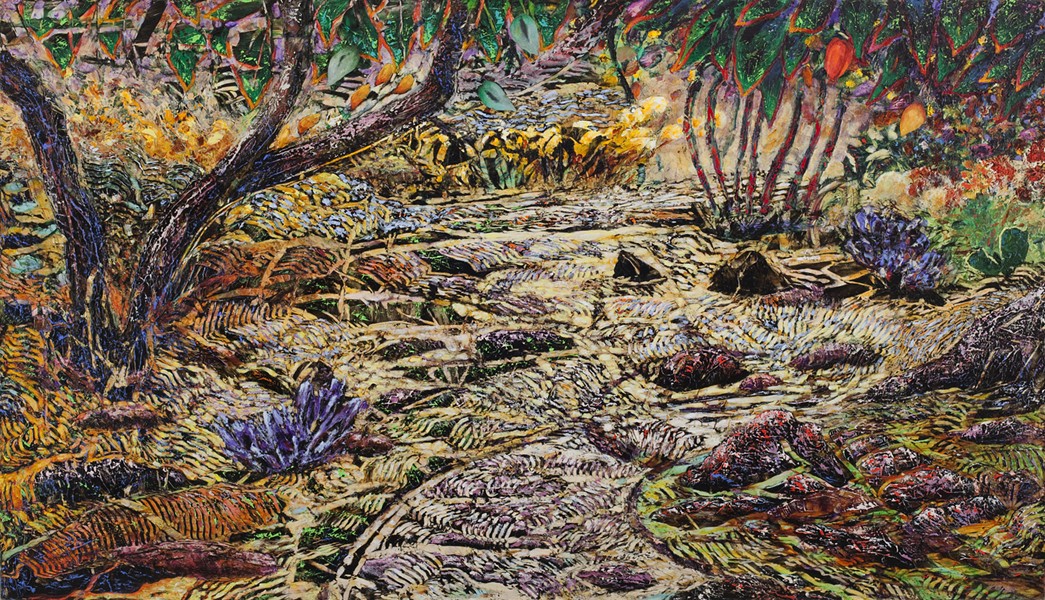 Just in time for the desert wildlife season, Tohono Chul opens On the Desert: The Discovery and Invention of Color. Artists in the big group show experiment with different ways of creating color, from nature’s dyes to synthetic concoctions, and display art in a kaleidoscope of hues. Feb. 13 to April 15. Reception with the artists 5:30 to 8 p.m. Thursday, Feb. 13. tohonochul.org

Speaking of color, Philabaum Glass Gallery has a new exhibition of glittering glass in a rainbow of shades. Richard Parrish: Tapestries in Glass shows off the intricate woven glass works of this artist from Montana. Through May. philabaumglass.com

Curt Brill, Susan Lyman, Jack McLain, Erik Jabloner and Souleiman Barry fill the space at Gallery 2 Sun, a downtown space dedicated to modern and contemporary work. The big show is on till the end of February. Gallery2Sun.com.

A dozen artists from around the world are honored in the Tucson International Women Artists exhibition at Contreras Gallery. These women, all active on the Tucson scene, hail from Mexico, Poland, Israel, Uruguay, Nicaragua, the Netherlands, France and the U.S.A. this tribute show, I can’t help but think of corny but wise Disney song: it’s a small world after all. Through February. contrerashousefineart.com.

Museum of Miniatures is hosting a celebration of American circuses, featuring the littlest big top you’ve ever seen. Behold the Big Top: Jean LeRoy’s Circus Parade is an exhibition of hand-carved folk art, with a miniature circus parading down Madison Wisconsin’s Main Street, as well as behind-the-scenes dioramas of circus life. The miniatures, including clowns, elephants and carriages, were inspried by artist Jean LeRoy’s time during the 1930s, when he worked as a clown with the Cole Brother’s Circus. While hidden details are a cornerstone of minitures, LeRoy’s vivid recreations of circus life, with striped backdrops, makeup kits and entertainers’ wardrobes make looking for subtle elements all the more fun. The exhibit runs through May 10. 4455 E. Camp Lowell Drive.