by Annie Sadovsky Koepf, Taming of the Review

Master Harold… and the Boys 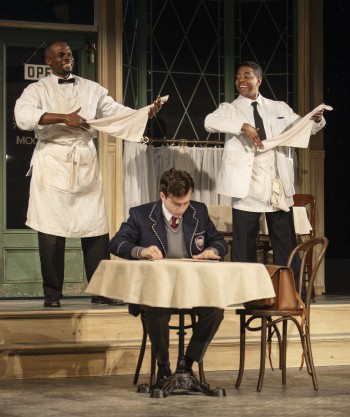 Arizona Theatre Company's production of Master Harold... and the Boys, Athol Fugard's semi-autobiographical play set in 1950's South Africa, begs the audience to question how we deal with difficult times.

Harold opens with two black men practicing ballroom dance steps in a tearoom in Port Elizabeth, South Africa. They are both anticipating a dance competition with nervousness and excitement. Their tone is lighthearted, a stark contrast to the constant rain falling. Quite quickly, we realize that Sam (Ian Eaton) is the older wiser man who is attempting to mentor Willie (Odera Adimorah), not only on ballroom dancing, but on how to treat his partner. This continues until Master Harold (Oliver Prose), the 17-year-old son of the owners of the tearoom, comes home from school. Quickly we realize that Sam has taken it upon himself to mentor not only Willie but Hally, as he affectionately refers to Master Harold. Sam and Hally obviously have had a long-standing relationship as a quasi uncle and nephew. The men help Hally with his homework assignment, and reminisce about flying kites and sweet times spent together in Hally's childhood. The play's light-heartedness abruptly changes when Hally finds out his disabled alcoholic father is coming home from the hospital. We now can see why Sam has taken the role of mentor to young Master Harold.

As the tone of the play changes, we are introduced to the themes of racism, oppression, and privilege. This is not simply a coming-of-age play in the same realm as Catcher In The Rye. The play addresses how people are changed by their circumstances, the factors that play in generational racism and what our reaction is to it. Do we accept it, escape from it, or hope that situations will change? This is very timely as our country and world are at a tipping point on how we move forward or backwards during difficult times. Do we blame "the other" for our misfortunes and exclude them to bring back a simpler, more idealized time? Or do we move forward and find new ways of dealing with challenges. Do we embrace " the other" or continue to scapegoat him to assuage our own failings? What direction are we going to take?

The play's powerful message is brought home by excellent acting by all three roles. However, it is Eaton's portrayal of Sam that took my breath away. The range and power of his emotions and the reaction he gets from the audience is exhausting in its impact. I viewed the faces of the audience when leaving, and every person was deep in contemplative, reflective thought. Yes, the script is award-winning, but the actors' performances brought the words into the hearts and minds of those present.

As always, the sets that Arizona Theatre Company uses are masterful. There is no doubt that we are in a tearoom in another country, in another time. Jason Sherwood did his homework and I applaud his tasteful depiction. He did not go the route of gaudy '50s kitsch, but rather chose to have the set reflect the solemnity of the play. The effectiveness of the nonstop rain, even as we entered the theatre space, effectively foreshadowed the gravity of the show. The work by Lindsay Jones as music and sound designer, Kare Harmon as costume designer, and Dawn Chiang as lighting designer are also to be commended for a job well done in supporting the time period and flavor of the play.

I would be remiss if I did not bring up the roles of Artistic Director Sean Daniels and director Kent Gash in bringing Master Harold... and the Boys to the Arizona stage. Daniels' vision of bringing shows that reflect the local community and also the issues that the greater American community is facing is worth noting. Gash masterfully supported that vision through the direction of the play, reflecting all the best we aspire to do in theatre.To give audiences a chance for deep reflection, contemplation and change is noteworthy.

I highly recommend this play for adults, and mature high school students. It is a wonderful reminder to all of us to reflect on our feelings and responses to the challenging times in which we live.

Find this and other local theatre reviews at tamingofthereview.com, a totally kick-ass, female-led, local, diverse, and community-oriented collective dedicated to coverage of Tucson theatre.