Meet Colt, a desert-weaned autodidact who cleans up crime scenes for a living

Brian Smith Colt Griffin on his ranch southeast of Tucson.

It's the absence of anything else but the kind of beauty you could curl up inside like a sleeping wild animal. Few manmade things means little mediocrity.

A couple of well-kept, air-conditioned trailers and vintage Ford trucks (circa '50s) are perched on the mesquite-rich hill, which oversees a ridge and the untouched Agua Verde valley and stream below that. It smells of wet creosote, is alive with the rustling of small animals and whir of hummingbirds and ungulates on dirt. 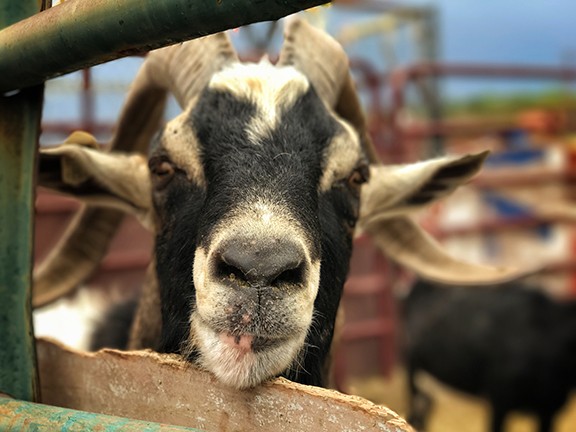 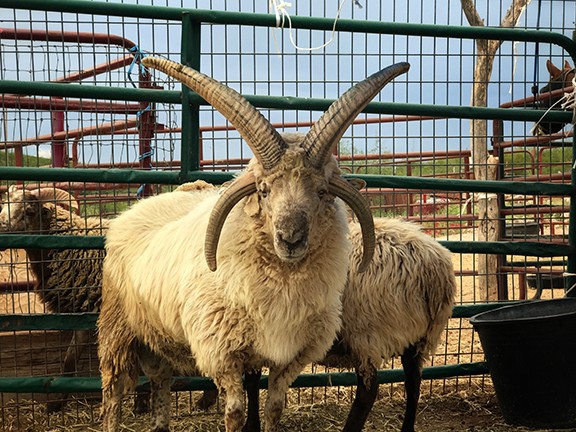 Sheep, goats and a mustang stir in corrals down a slight embankment from the trailers. Thick-fleeced churros huddle in a corner, nosing in the what-not, and Buffy, a majestic ram, sports four healthy horns like helmet-mounted weapons. In a neighboring stable, a half-dozen goats are led by a colorful Alpine (named Druid!) whose great curled horns and mad, see-all walleyes make him watcher of the valley.

Atop a nearby mountain sits the eerie King Arthur-ish castle of land baron Duane Durham. A few rooftops and stilted water tanks are scattered in the hazy distance below it, near the backside of Colossal Cave. A strutting mule a hundred yards off brays occasionally, but mostly it's so quiet you can hear the sky darken to monsoon.

Really, this guy Colt Griffin and his partner, Carol Frazier, are the only humans visible within miles, on their own 13 acres. Theirs is well water. Electricity is wired in unstrategically and it cuts off often during monsoon micro-bursts. Antiquated bikes and vintage trailers and wheelbarrows placed around the property show an eye for aesthetics. It's a mess of a hilly dirt road for anyone to get the hell up here. This isn't a junk-filled, animal-abusing compound occupied by sun-scarred cranks.


Carol calls the area "sacred," and it's easy to grasp that word's meaning here. Could only be isolation for the short-sighted. "You have to get up really early in the morning to spot a jaguar," she says.

And what of this guy Colt? He's dressed like an old railroad engineer, in striped denim overalls and matching cap, blue button-down and boots. His eye color matches the deep Sonoran green to which he wakes up daily. Colt says his train-driver get-up is an insignia.

That question goes unanswered. But the outfit could represent how he has successfully barreled through life since heading out on his own at 13. This blond-headed autodidact looks younger than his 54 years, but close listening reveals wisdom worthy of someone's hyper-observant 84-year-old grandpa. His sentences riff one onto another, topics veer but tie-off later in the conversation.

He speaks of retired-to-Tucson rodeo stars and descendants of Tucson's founding families, like “old man Bass” who sold the Tucson ranch to Paul McCartney. Stories involve caterpillar stings, horse rescues, and weaving baskets from devil's claw. How the hallucinogenic desert plant sacred detura (grows wild on his property) causes temporary blindness, or how he sometimes gauges the age of a gruesome crime scene by the size of the maggots. 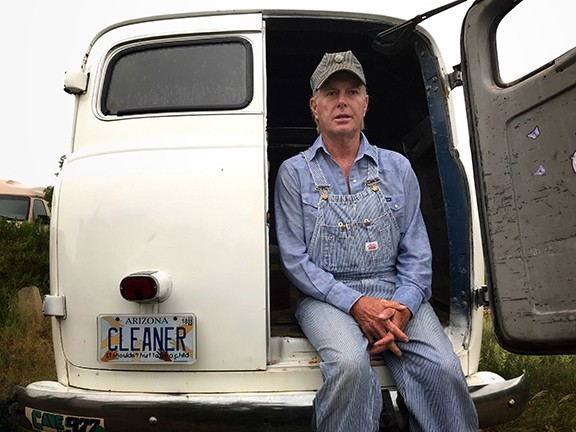 * * * *
We're in the living-quarters trailer (the other serves as office and storage), and it's clean and organized and cool from the central air unit Colt added on. A room centerpiece is a mint 1962 Vespa 150. A beauty, curved and glimmering like sleek mod art, but Carol isn't a fan. "It doesn't belong in the living room."

A sturdy wheelchair ramp leads up to the front door.

"It was preemptively installed," Colt says. Nearly everything he says feels like a joke non-joke. There's a fake stuffed goat on a nearby table wearing a cowboy hat.

"Plan ahead" He says. "Common sense isn't so common these days." 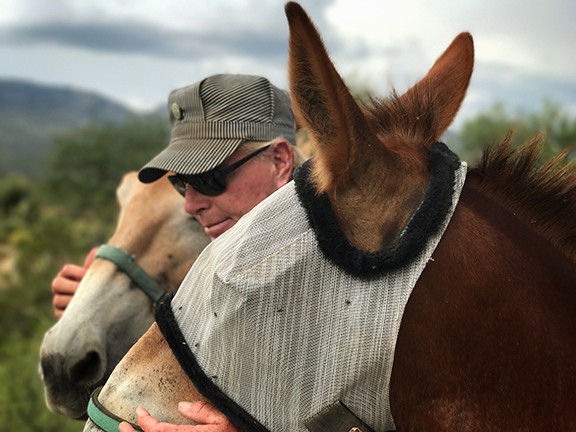 A feral cat named Little Black is curled in a nearby cage, healing and grumpy. She wears a cast because they found her outside with a broken leg. There's Little Calico who comes around to keep her company. It hardly matters that Colt's allergic to felines; Carol says Colt's love of animals transcends allergies.

The animal love comes from Buck, Colt's maternal grandfather. The WWII vet taught preteen Colt the meaning of life, so to speak. A true cowboy and rodeo man who happened to own a lot of property east of Harrison Road and Speedway, up to the 49er's club. Colt grew up around mules, chickens, goats, horses, and pigs.
"Buck was the kind of guy who would put you on a bull and watch you get thrown off," Colt says.

"That was his enjoyment. He was an old cowboy. He'd have you go out and get the switch ...," he stops. Says, "It made me the man I'm not today."At one point Colt got into carpet cleaning, subcontracting work in Phoenix.

Dad was a Tucson realtor, a "womanizer," out of the picture. Mom drank. So, after a bloody, last-straw brawl involving mom and her boyfriend, Colt ran away for good at 13. Spent his teen years living mostly in a "gypsy wagon," a motorless trailer that eventually burned to the ground near the Tanque Verde wash, east of Tucson. It was on land owned by an old hippie friend, who’d purchased it from Colt's grandfather, who'd moved to Montana. In exchange for rent, Colt's job was to prevent trespassers from sawing mesquite trees into firewood. He worked other jobs, too, for meals. Had a couple of goats, lived on cheese and milk. He learned farming and carpentry and masonry, goat herding, jewelry making, and even built himself a little adobe house. ("You stay cool in the summer, warm in the winter — it's why the power companies don't want you to use adobe.") It’s why he calls himself "Manuel Labor."

Eventually he drifted around, found work in bars and restaurants, and managed some around Arizona and Montana. He later got into carpet cleaning, subcontracting work in Phoenix. He found messes, bloody ones. ("Any carpet cleaner will tell you that you'll run into the blood pathogen thing.”)

Out of fascination he studied the science of blood. He soon began forensic cleaning, mostly for friends. He laughs, "By this time I knew you had to wear a suit and everything. And I soon realized you had to have a license."

He studied forensics, the cleanups. The science of it, Colt says, is boundless. His business grew. "Someone would get shot in a car or something out on the Southside, and I'd get a call, get suited up and get down there and clean it up."

Colt's company — Griffin's Crime Scene Cleanup — is now his main source of income. A license plate on one of his work trucks reads: CLEANER. His is one of a handful of crime-scene cleanup outfits in Tucson. It's licensed, insured, been on the books more than three years, and lots of work comes through Pima County Victims' Services. He often works solo, but sometimes hires assistants — which is problematic. “There's so many things that go into this,” he explains, “respiratory tests, training ... and the hazards, the chemicals and germs. The bloodborne and airborne pathogens, viruses like hepatitis.”

Colt’s a decontamination specialist whose main focus is suicide and homicide cleanups, and now clandestine drug labs, and the "gross filth" of hoarders. "Most hoarders are very intelligent, but you never know what you'll find," he says. "I'll open someone's refrigerator and holy moly, three years of mold. There was one lady who stuck all her dead cats in the freezer."

There was the gentleman who was dead so long he melted into his chair. "Yeah. When that happens they become soup," Colt says, "and it drips down into the carpet and then it gets into the concrete. Sometimes it has to be chipped out of concrete."

Colt's manner shifts when he talks about his work. There's forced absence of sentiment. It can't be easy for him, to repatriate his emotions, the human sadnesses and gore, the suicides, as tragedies become familiar. "You just don't want to get emotionally involved," he says. "I mean, some of these can be devastating." 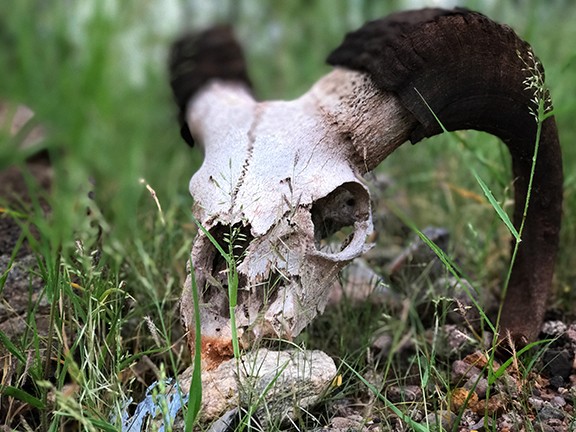 He tries never to say he's sorry to victims' loved ones.

"It does sound cold, but it's neutral. Otherwise it can blow up in your face."


He's taken classes to deal with people suffering trauma and he sees a debriefer to help him cope with scenes he's cleaned up that he can't even talk about with Carol.

One such involved a murder-suicide, a mom shot her children in their beds and then herself.

"I don't have a problem with adults or elderly," he says, "but children ... the child thing. It's horrific what humans can do."

In January, he cleaned up six murders and suicides, the most he's done in a single month. "And some of them take weeks to scrub."

"It's astronomical how many people die in Pima County each day," he says. "Homeless, elderly, nursing homes, accidents, unintended deaths, trains ... It's my understanding that a few people are hit each week by trains. I'm trying to get in with Union Pacific; there's an approval process, but they contract the cleanups out."

Carol sits on a bench beside the graves of her pet wolves. One, named Kyra, died after swallowing a bee. She talks of tree frogs still living in the little valley below, in a copse of mesquites and cottonwoods, where the Agua Verde once ran year-round. Make a frightening sound at night like aliens.

She's patient too while Colt talks even though "he rambles."

Colt replies, "That's true, but I get it all in there."

The two met 30 years ago at the old Exxon Station at the corner of Speedway Boulevard and Pantano Road. ("He was the biggest flirt in the world.") They've been a couple for 20 years, and she runs the business end of Griffin's. She used to sell property on Mount Lemmon, even drove the school bus at Summerhaven there. 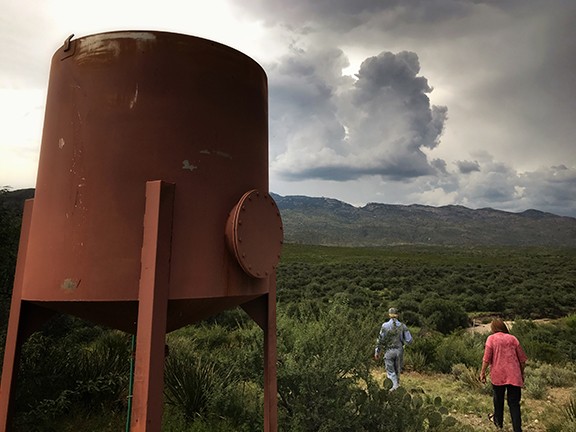 It's easy to understand the existence Colt created near Vail with Carol, with the Sonoran quiet and animals and peace. How he’s happy to be here after watching loved ones drink themselves to death.

"I wanted to live here since I was a kid," Colt says. If civilization encroaches he'll sell and buy a place further out.

"A little ranch like this is a lot of work," Colt adds. "Every damn day." Then he laughs, "The crime scene cleanup supports my ranch habit. But these animals, these are my people."