by Regina Ford, Taming of the Review 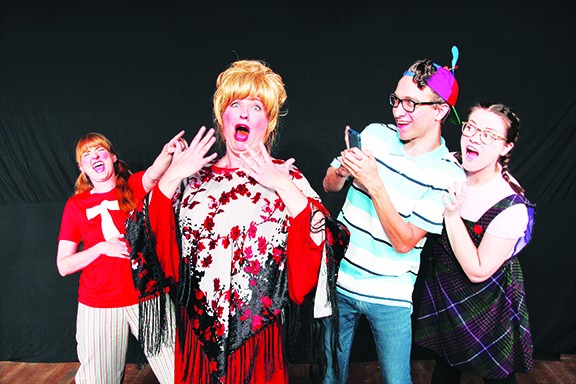 Tilly is a grade school-aged youngster with an inkling for playing pranks on her family, friends, at school, and on just about anyone. This kid doesn't discriminate. At the start of the show, Tilly announces, "I love, love, love to play tricks." What follows is 75 minutes of electrically charged energy full of song and dance and Tilly's relentless, not-really-dangerous practical jokes.

Tilly the Trickster, a family-friendly show, written by Jeremy Dobrish with music and lyrics by Drew Fornarola and based on the children's book written by actress and comedian of SNL fame, Molly Shannon, is running now at Live Theatre Workshop, just in time for the holiday season. This energetic show is definitely not your traditional holiday presentation. There's no Santa, no stocking and no tree, but there is a message that goes beyond the tinsel and gingerbread: Tricks are not always fun for everyone, no matter how harmless they seem.

No one escapes Tilly's tricks and mayhem starts first thing each morning. Her breakfast antics send her baby brother's cereal flying throughout the room, much to the annoyance of her parents. Their frustration is highlighted with the song, "Where Did We Go Wrong?" The only one delighted to see breakfast on the floor is Peppermint, the family dog.

Tilly's antics result in her schoolmates missing the bus. A gift of hot candy to her teacher gets her sent to the principal, with no results. Punishing Tilly is no use. She pretends she's sorry but lets the audience know with a smile and wink that her game is not over.

Tilly is taxing, but not cruel. She believes everyone she pranks thinks it's funny, too. I want to thank Shannon for writing her starring character as a girl. My recollection of mean girls in grade school is pretty vivid. For the shy or overweight kids or anyone who was "different," the girl's gym class was a venue for ridicule and pranks causing cruel humiliation. I doubt very much if the toddlers in the audience understood the moral of the show, but watching their faces, I could see that the singing and dancing and especially the tricks kept them entranced for most of the performance.

Shannon and Dobrish included some dark humor in their dialogue that missed the mark for me. When the principal is trying to teach Tilly a lesson he recounts his own troubled childhood and describes tormenting animals. Hmm? That scene disturbed me. Even though the principal is remorseful for his behavior, taunting animals sends a message that may be misunderstood by young children.

The actors worked well as a unified ensemble and created a variety of characters with ease.

Samantha Cormier (Tilly) never let her energy down, and her ability to play a grade-school student is pretty amazing. I would have avoided her Tilly like the plague if I went to her school. Cormier was very good but I really would like to see how a preteen actor would have handled the role.

Janet Roby played three roles: Tilly's mom, Tilly's teacher Mrs. Mooney, and a cat (puppet). Roby and Christopher Moseley, who portrayed Tilly's dad, as well as the bus driver and the school principal, worked so well together as Tilly's freaked out parents. Both actors were nerdy enough to appease the younger audience members yet sympathetic enough for parents to identify with as they coped with a rambunctious child. They also had great catchy musical numbers with clever lyrics like those in "Mornings Stink." Words like fart, litter box and pee-ew fit right into dialogue and lyrics.

Tilly's younger brother is played by a puppet brought to life by Kyleigh Sacco, who also acted the part of a bird (puppet) plus Tilly's school friend Emily. Sacco nailed the role of Teddy, the baby brother. This character was portrayed using a puppet and, dressed in black clothes, she maneuvered Teddy around the stage wonderfully. She disappeared as Teddy came to life.

Peppermint the dog is one of my favorite characters in the show. Austin Killian makes this comical canine the pet you want to adopt and call your best friend. Peppermint shares enlightening speeches that it is made clear only the audience can understand. He becomes the voice of reason for the play. Just when he thinks he's understood by the other characters, they let him know that all they hear is "Arf! Arf! Arf!"

The choreography by Amanda Gremel was simple but also a creative balance with the music direction by Taylor Thomas. The set, designed by Richard Gremel, was so simple yet very effective. Childlike hand painted drawings depicting some of the trickster's props in the show surrounded the stage on three sides while the title of the musical, "Tilly the Trickster," took center stage serving as the show's background throughout the performance. All the cast moved props off and on the stage and their work as a tight ensemble made the show just flow.

Tilly the Trickster is appropriate for the entire family, although I think very young children may not understand the plot. That's where the music and the strong zany characters will capture their imaginations.

Find this and other local theatre reviews at tamingofthereview.com, a totally kick-ass, female-led, local, diverse, and community-oriented collective dedicated to coverage of Tucson theatre.