2740 S. Kinney Road
Daily: 7:30 a.m. to 2:30 p.m.
520-883-7297
catmountainstation.com/coyote-pause-café
Service: Breakfast, Lunch, Brunch, Take Out
Price Range: $10-$30
Casual, Patio, Family Friendly, Vegetarian/Vegan Options
For those of us who enjoy 100-plus degrees, the summer months can mean exploring the further reaches of our Tucson outpost. It might be sizzling hot, but we have the cafés and saloons all to ourselves. So enjoy hopping on your bike, getting behind the wheel or slipping on your favorite walking shoes to explore the Baked Apple—and be sure you have plenty of water with you.

I like to throw a dart at my map of possible places to eat and drink beyond the city limits. I was recently fortunate enough to land on Coyote Pause Café. Just outside of the west side's Tucson Mountain Park, you'll find a quaint shopping center called Cat Mountain Station, with artisan shops, a trading post, a lodge and roadside inn and even an observatory. The Coyote Pause Café is the front and center with some seriously good southwest chow, including a house breakfast specialty called Coyote Hash ($11.99 with two eggs, $12.99 with three), a wild savory house take on corned beef hash featuring locally produced eggs and a near-perfect buttermilk biscuit. Very filling before a day spent at the Sonoran Desert Museum or Old Tucson Studios, both of which are just a few miles up the road.

Coyote Pause Café is owned by Kersten Block, the founder of Buffalo Exchange. Originally from Stockholm, Block moved to the United States in 1960 when she was 18 to earn a degree in anthropology at the University of Arizona. After graduating and doing nothing even remotely close to her applied studies, Block worked in a furniture store before getting fired in 1973. In 1974, she and her husband founded Buffalo Exchange and, well, you can guess as to where she went from there. 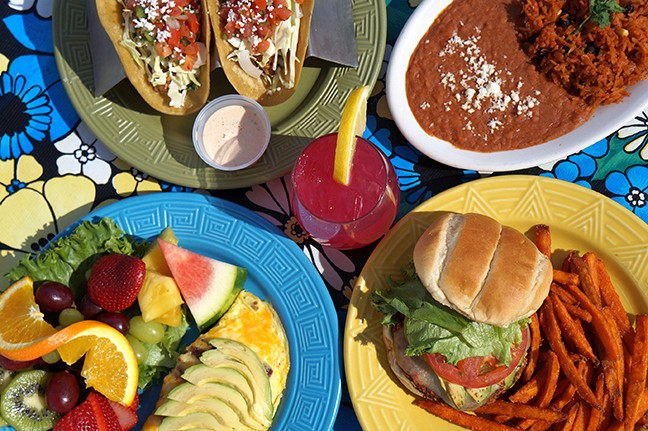 The Cat Mountain Station was built in the '50s by a man who wanted a museum to display his massive collection of John Wayne memorabilia. After that owner died, the Blocks picked up the property in the early '80s and gave the place a makeover, including an update of the old restaurant on the property.

"At the time it was counter service, only doing sandwiches and such," says Block. "We knew we wanted to do breakfast after opening the inn and lodge because you can't have a bed and breakfast if you don't serve breakfast."

The recipes and dishes are proudly uncomplicated with a healthy helping of familiar Americana warmth. The mesquite pancakes ($3 each) are subtle, slightly smoky, fluffy, huge and satisfying. You can top them with chocolate chips or even peanut butter, but before you do, just try one with syrup, some fresh whipped butter and a swirl of local agave. It is a Southern Arizona morning on a fork.

Coyote Pause seamlessly slips into lunch with offerings such as the funkily titled Desert Tortoise Sandwich ($10.99). At first, I recoiled, but it turns out it's not a treasured desert tortoise, but rather calabacitas (you live in Tucson, you should know what this is) mixed with spinach and topped with nutty Swiss cheese, served on hearty wheatberry bread. It sounds unusual because it is. In the best possible way.

For lighter eaters and hotter days, the café has a fine selection of salads, but when temps cool down and you can see your breath during your day hike, you should try a heaping bowl of their house made chili ($4.59 a cup, $5.59 a bowl). Made with a combo of beef and—yes—buffalo along with nopalitos and green chilis, it is spoonful after spoonful of heady cowpoke tradition. They do a solid burger too, with your option of both real cow and fake cow.

Get out for a day and sit for a spell in the Coyote Pause Café. And if you see a slight, short haired, older woman with a distinct Swedish accent, most likely that will be Kersten Block. She owns the place. And a whole heck of a lot of other things too. But she is humble and very approachable. Just like the food she stands behind. ■