10 Things To Know About This Year’s Legislative Session

With the holidays in the rearview mirror, Arizona's naughty 90 are headed back to the Capitol for what they hope will be a quick legislative session.

They want to wrap the session early to hit the campaign trail for the all-new, early August primary election.

Lawmakers will spend the next few months doing their usual damage: helping measles spread through schools, making it easier to throw out your vote and sticking it to liberal Tucson for having the gall to consider—then resoundingly reject—a sanctuary city policy.

But Arizona is finally climbing out of the post-recession decade, and in these Roaring '20s, the first big question lawmakers have to grapple with is what to do with nearly $700 million in extra revenue.

House and Senate leaders are developing their own budgets independent of the governor, and hope to come to an agreement in mid-February—far earlier than usual. But GOP lawmakers and Gov. Doug Ducey are much better at cutting the budget than increasing it, so expect a lot of lawmakers to have ideas about funding programs and/or cutting taxes.

With razor-thin GOP majorities in both the House and Senate, any individual lawmaker can hold the budget hostage to get their pet bills through the process.

That's what happened last year, with Republican Sens. Paul Boyer and Heather Carter refused to support the GOP budget until legislative leaders allowed a vote on Boyer's bill to extend the length of time sexual assault survivors had to bring lawsuits against their abusers.

Watch for lawmakers to retaliate this year—we hear rumors around the Capitol that Boyer and Carter are still on the shit list and will have a tough time passing bills.

As lawmakers get to work, here are 10 things to watch for in the upcoming session.

After cutting the universities by $100 million early in his tenure and promising teachers an insulting 1 percent raise, Ducey has rebranded himself the Education Governor—and will surely call for more investments in our K-12 education system in next week's State of the State.

Lawmakers will cover the basics—including finishing off Ducey's promise to give teachers a 20 percent raise by 2020.

And there may be a push to put some of the state's current windfall into repairing school facilities, which face a huge bill for deferred maintenance.

But Republican lawmakers—facing a fear they could possibly lose their majority in 2020 and looking for wins heading into a likely bruising election season—will also be looking to appease a base that decried the #RedForEd movement as a socialist takeover of education.

Instead of paying back the billions they still owe to Arizona's schools from illegal recession-era cuts, expect Republican lawmakers to call for more tax cuts. 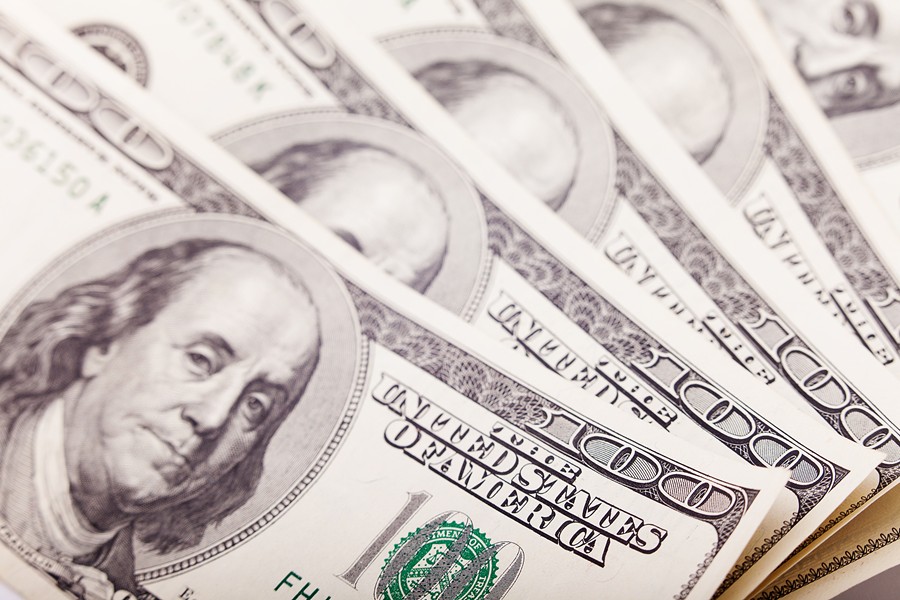 When the state has plenty of money, Republican lawmakers have one thought: Cut taxes or else the libs will spend it on schools or something!

When they conformed the state tax code to Trump's federal tax cuts, lawmakers last year gave the richest Arizonans a big break on their income taxes.

But the governor put the kibosh on lawmakers' attempts to enact an even more draconian tax cut for the wealthy.

Still, Ducey has to deliver on his promise to cut taxes every single year he is in office, so as long as there's enough left for his pet projects in education, don't count on him to be the adult telling lawmakers no.

We'll have to wait until the governor unveils his budget proposal on Jan. 17 to see how he wants to make good on his promise for tax cuts this year.

Your Right To Vote

The leader of the free world wrote: "Just out — in Arizona, SIGNATURES DON'T MATCH. Electoral corruption - Call for a new Election? We must protect our Democracy!"

And while there's no evidence of any sort of election fraud, Republican leaders are once again looking to stop it.

Their solution? Make it easier to disqualify your vote. Sen. Michelle Ugenti-Rita's SB 1032, which would automatically throw out mail-in ballots that are returned without signatures, rather than allowing county elections officials to check with voters to ensure they, indeed, cast that ballot, as they do now.

Currently, if your voting address doesn't match the address on your driver's license, state laws allow you to show a recent utility bill or bank statement to prove you live where you say. But under Rep. Kelly Townsend's HB 2043, you'd have to vote a provisional ballot, which are more likely to be thrown out.

And after Democratic Secretary of State suggested that college students could use their college IDs to vote, if universities started putting addresses on them, lawmakers want to ensure that doesn't happen. Townsend's HB 2043 would also ensure school IDs can't be used to vote.

Criminal justice reform has become a cause celebre for Republicans in recent years, and Rep. Walter Blackman (R-Snowflake) is leading the charge at the Capitol to reduce the number of people in prison. He'll face pushback from some of his hardliner colleagues, for sure, but there's reason to believe Blackman may be able to overcome some of those obstacles to implement some common-sense reform.

Under his HB 2070, police could issue civil citations rather than make arrests for those types of crimes and the perpetrators would be sent to educational or intervention program. Perpetrators would have to performs community service and pay restitution to victims, if there were any. But it would keep people out of jail for low-level offenses.

And for those already in jail, Blackman's HB 2069 would create an independent committee to provide oversight over the Department of Corrections in an effort to "improve transparency, fairness, impartiality and accountability in correctional institutions."

Other Republicans are also looking to minor tweaks to reduce penalties for low-level crimes. Rep. Leo Biasiucci (R-Lake Havasu City) sponsored HB 2055, for example, to ensure that those convicted of civil traffic violations can perform community service if they can't afford to pay the fines.

With big weed once again campaigning to put recreational adult use of marijuana on the 2020 ballot, lawmakers could step in and pass their own laws regarding adult use. Sure, we sound a little high when we say the Arizona Legislature could legalize marijuana, but lawmakers do have one motivating factor: If they do it, the laws can be changed, whereas if it passes as a ballot prop, it's voter-protected and lawmakers can't make changes except under strict circumstances. State Rep. Randy Friese, a Tucson Democrat, says he plans on introducing legislation that would legalize adult use. Meanwhile, the recently formed Arizona Cannabis Chamber of Commerce is pushing lawmakers to consider an alternative ballot prop. Either route appears to be a long shot, however.

Although Tucson's Rio Nuevo development district can be credited with rejuvenating downtown in the past decade, and just passed a state audit with flying colors, Phoenix-area lawmakers are again setting their sites on cracking down on Rio Nuevo.

Sen. David Farnsworth (R-Mesa) sponsored a package of bills to go after Rio Nuevo, saying he's concerned about the district's spending habits. Two of his bills would give lawmakers greater oversight over its spending, while another would force Rio Nuevo to fire its lobbyist, former Tucson Republican lawmaker Jonathan Paton.

Farnsworth is meddling in Tucson issues in spite of the fact that his Southern Arizona colleague Rep. Mark Finchem, who is no pinko socialist, has come around on Rio Nuevo, even sponsoring legislation last year to extend its life.

Republican lawmakers were enraged when Tucson activists forced a vote last November on whether it should be a sanctuary city. A handful of GOP lawmakers promised retaliation, saying they would beef up laws punishing sanctuary cities.

Rep. Bret Roberts (R-Maricopa) for example, promised to sponsor legislation that would allow victims of certain crimes perpetrated by undocumented immigrants in sanctuary cities to sue the city. Nevermind that Tucson voters resoundingly rejected the measure in November. Roberts said he'd sponsor the bill even if the sanctuary city initiative failed.

They had it coming to them

Though nobody has filed specific legislation on the topic so far, there's reason to believe the rumors that GOP leaders at the Capitol are cooking up changes to the state's sex ed laws.

He called Democratic Superintendent of Public Instruction Kathy Hoffman a radical, saying her attempts to update the state's sex ed policies would "radicalize children and their sexuality."

To get a sense of what kinds of policy GOP leaders might push on that front, look to Rep. John Fillmore (R-Apache Junction) who has sponsored HB 2005 to prevent public schools from teaching teens how to recognize and end abusive dating relationships.

After an Arizona high school student was murdered by her abusive ex-boyfriend in 2008, lawmakers let schools develop curriculum to teach about how to recognize and end abusive relationships for grades seven through 12.

But Fillmore told Capitol Media Services' Howard Fischer that schools should stick to reading, writing and arithmetic, and leave the dating lessons to mom and dad.

Junction) who has sponsored HB 2005 to prevent public schools from teaching teens how to recognize and end abusive dating relationships.

After an Arizona high school student was murdered by her abusive ex-boyfriend in 2008, lawmakers let schools develop curriculum to teach about about how to recognize and end abusive relationships for grades seven through 12.

But Fillmore told Capitol Media Services' Howard Fischer that schools should stick to reading, writing and arithmetic, and leave the dating lessons to mom and dad.

Keeping with this pro-violence stance, Fillmore sponsored HB 2016 to encourage corporal punishment in schools—which is already legal in Arizona—by promising teachers they can't be sued for disciplining children if the tactic of discipiline is "in accordance with law."

That matters, because in the vast majority of Arizona schools have policies against corporal punishment, even though it is technically legal.

And to ensure our youth come out of school sufficiently patriotic, Fillmore introduced HB 2017, which would make saying the Pledge of Allegiance daily in school mandatory, rather than optional.

And while he wants the pledge to be mandatory for students, Fillmore isn't so keen on vaccinations—his HB 2050 would make them optional. Nevermind that Arizona already has some of the weakest vaccine requirement laws in the country, as parents are allowed to opt out for any reason by simply signing a form. Instead, if Fillmore has his way, parents won't even have to sign a form to enroll their unvaccinated children in public schools.

The Arizona Board of Regents in August voted unanimously to allow undocumented students, even those who aren't DACA recipients, to pay 150 percent of in-state tuition, but still less than out-of-state-students. Fillmore wants to overrule ABOR.

Fillmore's HB 2020 would essentially calculate the difference between out-of-state tuition and the actual amount undocumented students pay, multiply it by the number of students receiving that lower rate, and cut ABOR's budget by that much.