Kevin Kline almost makes Last Vegas, a film seemingly based on the whims of a focus group, worth watching

Get it—Last Vegas? It's retirees in Las Vegas: The Hang-older. No two ways about it, this is pretty much a new spin on The Hangover, even though the second and third installments of that series did a fine job of ruining the concept on their own.

In fairness, Last Vegas doesn't ruin anything, if you can accept that this is an old idea with new (but old) characters. While unfolding almost exactly the way you'd imagine, it's a kick to watch Kevin Kline do a mainstream comedy again, and Mary Steenburgen has some nice moments, too. Unfortunately for this movie, though, they're supposed to be the afterthoughts.

Four old friends have gone their separate ways. We meet them as kids in Brooklyn and are reintroduced to them 58 years later, when they're all 70. Archie (Morgan Freeman) is retired from the Air Force, living with his son in New Jersey. Paddy (Robert De Niro) lost his wife a year earlier and barely leaves his low-rent New York apartment. Billy (Michael Douglas) is a jet-setter in Malibu. Sam (Kline) hates Florida, where he believes everything goes to slowly die.

Billy and Paddy don't get along for reasons that involve a woman, but on the eve of Billy's first wedding (appropriately enough, to a woman less than half Michael Douglas' age) Sam and Archie decide to throw him a bachelor party in Vegas and drag Paddy along. Soon after they arrive, Billy and Paddy are once again jockeying for the attention of a woman, a lounge singer named Diana (Steenburgen) who has seen enough of all types of men in her life to spot trouble coming all the way up the Strip.

Despite the creaky gears of the machinery, Last Vegas does get some unexpected laughs, almost all of which come from a locked-in Kline. He was hired to steal scenes and does, but when your comedy needs comic relief, that can't be a good sign. Kline's jokes aren't particularly sophisticated, and that may be why they work so well: You expect him to be above the fray, but here he's having fun in the gutter. Well, relatively: It's still a PG-13 movie, although that's a curious place for this to land. Who between the ages of 13 and 17 is going to want to see this? Go for broke and aim for the R rating.

This film seems like a focus group decision. "They just don't make movies for us anymore," says 65-year-old Barb, a teacher from Sioux City. "Why are there so many explosions nowadays?" Well, Barb, here's a movie for you: Old guys, adult-themed humor without too much adult language, and an easy time at the cineplex, which is quickly becoming your least favorite place in the world. And ultimately, if this is a focus group movie, that's fine. Good for Barb in Sioux City. Everyone seems to be enjoying themselves and there are more highlights than low points.

De Niro has been better in the past couple of years, but this shows signs of retreating to the Box Office Bob persona that has lazily dominated the latter half of his career. Douglas is playing a very thinly veiled version of himself, and Freeman could read an owner's manual and give us something interesting. On the whole, the main performances balance out. It's really Kline, with his id in rare form, and the enchanting Steenburgen who make Last Vegas worth watching at all.

Last Vegas is not showing in any theaters in the area.

Claytoon of the Day: Face-Punching Civility 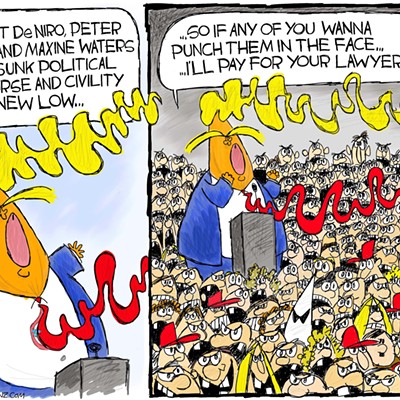