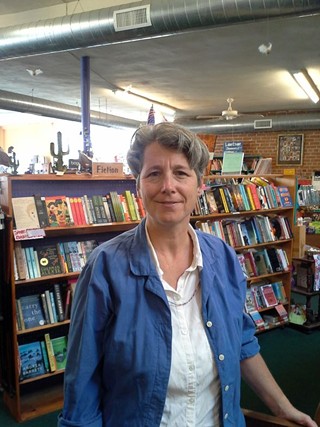 Kate Randall and Trudy Mills are throwing a party this weekend to celebrate the 40th anniversary of Antigone Books, which has been a Fourth Avenue institution for most of its existence. Randall says it began as a feminist bookstore named after the "feisty" heroine from Greek mythology, adding that a name starting with the letter A was also great for phone book listings. The party runs from 1 to 5 p.m., Saturday, Oct. 19. Games, food, cake and a book sale are on tap, and there's a drawing for two $40 gift certificates at 2 p.m. U.S. Rep. Raul Grijalva and City Councilwoman Karin Uhlich are expected to attend as well as Antigone founder Barbara Atwood. For more info, visit antigonebooks.com.

How did you get into this business?

I have been an owner since 1990 when Trudy and I became business partners. She became an owner in 1987. It was originally started by three women who pooled their money—$500 each—in 1973. One of the women who opened it was Barbara Atwood. She teaches in the UA law school now; the other two are no longer in Tucson.

What's the secret to keeping an independent bookstore in business?

We have been very lucky in our community support. That is key, and Tucson is the perfect size for us. It's not so big that there are 50 independent bookstores, but not so small that there's not enough people interested in supporting your store. We really try to be open to following what people are interested in, but it started as a strictly feminist book store and that's still an important part of the store today.

Southwestern writers have also become an important part of the selection, right?

Has the shop-local movement helped?

It's helped us and a lot of other businesses—people understand that more proceeds go back to your community when you shop local. Some people really care about that and I think it has helped raise awareness all around. I think keeping the community unique is also really important. You don't want to see the same things wherever you go.

What the store's history on Fourth Avenue?

Well, the store opened next door and then it moved up the street. That was when I started working for Trudy. She and I expanded it to be on the corner where Pancho Villa's (Grill) restaurant is now and that was a good space, but our landlord put us on a month-to-month lease and that was just too risky. That's how we bought this space (at 411 N. Fourth Ave.). It was the Salvation Army thrift shop in 1995. I just wandered in and asked the person at the counter, "Are you going to stay here forever? Do you think there's ever going to be a chance that you're going to sell the building?" I was told to wait and a guy came from the back and said yes. It was the weirdest. It turned out they were on the verge of closing their shop here, so we totally lucked out. It never even went on the market. It was three times as big as we had before.

Are you surprised at the store's longevity?

It is just amazing to me ... I can't believe 20 years have passed since we had a party for (the 20th anniversary). It is one of the oldest feminist bookstores. The oldest was Amazon Books in Minneapolis (not the giant online store), which started in 1972, and we started in 1973 and they aren't around anymore. We're still here because people of Tucson have rallied around and supported us.

The Weekly List: 23 Things To Do In Tucson In The Next 10 Days