The Buzz on Marijuana Extracts

While smoking bud will likely never go out of style, the marijuana industry is quickly moving in the direction of extracts.

An extract—you might hear names like shatter, wax, budder, or crumble—is essentially an oil made of refined and concentrated THC. It can be smoked without pot's signature skunky scent with a vape pen, dabbed in a bong or added to edibles as a primary—and intoxicating—ingredient.

Extracts are generally made by soaking marijuana bud and other plant matter in some kind of solvent, such as carbon dioxide or butane. That breaks the plant down into an oily mass that is then strained to remove chlorophyll, lipids and any carcinogens that may have been added to the mix through the use of the solvent. The resulting dark oil, which more than 90 percent cannabinoids, is then refined and distilled further, depending on whether it will be smoked or used in an edible.

The science of behind the creation of extracts is advancing rapidly. Dispensary chefs are now like craft brewers; once they have their distilled oil, they can supplement it in different ways by adding marijuana terpines to the mix. The terpines, which are also extracted from the plant, add the flavors of specific strains but they also play a more important role: They aid in what is called the "entourage effect." While terpines don't have any intoxicating effect on their own, they do interact with THC to affect the type of high a user experiences.

Here are some of the ways that companies are using extracts. 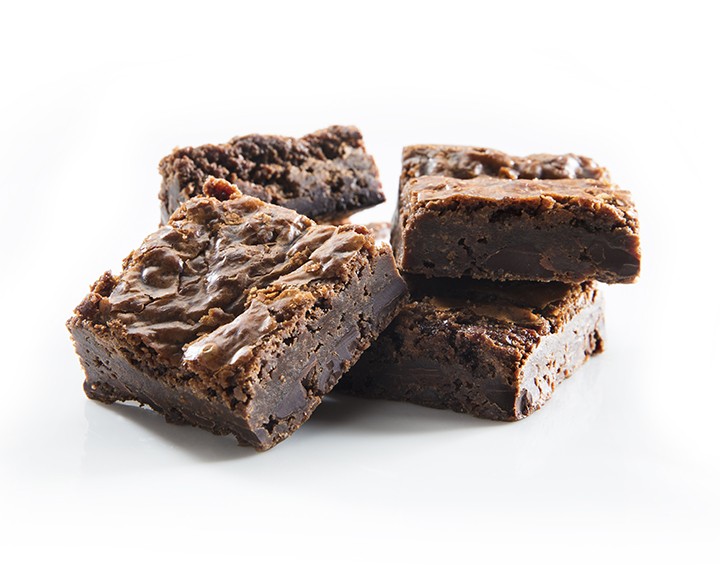 Love Carissa is a line of medibles from Phoenix-based Hana Meds, so you'll find a wide variety of the line at Hana's Green Valley dispensary. The line features heart-shaped chocolates and lollipops, making this an ideal treat to share with your card-carrying romantic partner. (They also make brownies and infused honey.) Rather than using a distilled extract, the kitchen team cooks kief—the sticky crystals on marijuana buds that are loaded with terpines and cannabinoids—in coconut oil to make the base for the batter. The medibles are prepared with all-natural, top-of-the-line ingredients in small batches to ensure high quality. If you don't want to make the drive to Green Valley, you can find their lollipops at the Downtown Dispensary, D2 and Desert Bloom ReLeaf Center. We found the 20mg chocolate heart was rich and sweet with just a hint of cannabutter, and it provided a sustained pleasant buzz over several hours, while the 40mg lollipop had a great flavor and packed a powerful punch.

Sometimes, you just want that experience of smoking an old-school joint. Botanica's solid offering in this pre-roll department is a .85 gram fatty that earned respect from our reviewers. We found the 9 LB Hammer to have a sweet flavor with a woody earthiness. The burn was good with the kind of long ash you'd expect from a densely packed fine grind. One reviewer found it brought on a heady euphoric rush followed by deep relaxation, while another noted that that after smoking it, she was playing music with a friend, "and before I knew it, I forgot the lyrics to the song." A veteran toker noted that the tightly wound cone "put my once-formidable rolling skills to shame. Indica tends to send me off to slumberland and this was no exception. Pleasant dreams."

Cornucopia is the house brand of Tucson's PurpleMed/GreenMed dispensaries. Head chef and kitchen manager Jane Monday has decades of experience as a cook and pastry chef, although she's new to the medical marijuana field. (She confesses that she smoked weed back in '60s and '70s and conducted a few unscientific baking experiments with pot brownies. "We were all pirates then," she recalls wistfully.)

Cooking with marijuana has become a lot more scientific since then. Monday has lab reports about the distilled marijuana extract that is at the base of the edibles. Monday's main goal: To ensure a standard level of quality and doses in her handmade brownies, cookies, candies and such. She mixes the distilled marijuana oil with coconut oil to help it emulsify and to evenly distribute the medicine. Then everything is done by scratch and with butter, sugar, cinnamon and the like—or "real food," as Monday puts it. The cooking team closely watches the cooking temperature to maintain the integrity of the medicine.

We loved Cornucopia's cookies, brownies and gummies. The cookies were fresh and sweet, with a 20mg dose putting us exactly where we wanted to be for several hours. The gummies were great, but one of our reviewers warned that when it comes to edibles, "you've got to dial it in. Cut them little suckers up as needed for a controlled and extended experience. These delivered all that and more." 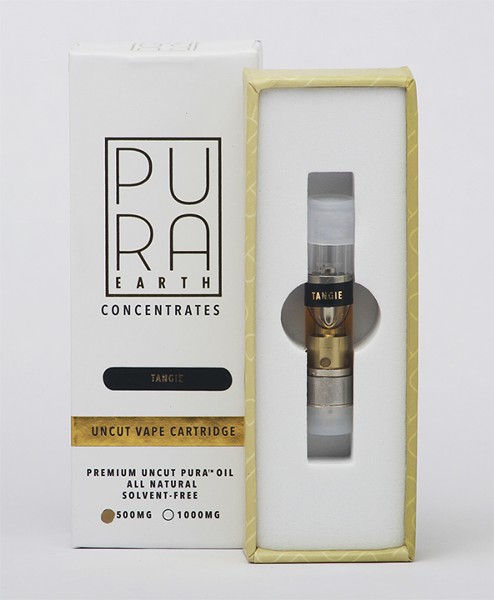 Respect for the plant is at the heart of Pura Earth's approach. They start with a cold ethanol extraction of the bud and other plant matter, followed by four different strainings (including a final one-micron screen) to remove chlorophyll, lipids and other unwanted elements, followed by other distillation stages until they have their refined oil. They then add marijuana terpines for flavor and the so-called "entourage effect" that enhances the intoxication experience. We found the Durbin Poison vape cartridge to have a smooth flavor and a sustained high—just a few puffs had an effect that last for hours. One reviewer who suffered from chronic back pain found significant relief after trying it. In Southern Arizona, you'll find Pura Earth products at Prime Leaf, Botanica, Green Halo and Hana Med.

Green Halo's kitchen is right in the dispensary, so when you walk in on a cooking day, it smells a lot more like a brownie bakery than a dispensary. They have hired a team of experienced pastry chefs who craft their baked goods. They use a marijuana concentrate right at the start of their cooking process, melting it in coconut oil or butter as the first step of mixing the batter. The lemon blondies we sampled come out of the oven and are overlaid with a simple syrup to soften the tart cirtrus edge. They're frosted and then sold fresh. Our take: It had a great lemon cake flavor but fair warning: If you're a lightweight, you should stick with tiny bites—otherwise, you might wake up still high the next day. A reviewer with greater tolerance thought the lemon blondies tasted even better than Green Halo's spectacular brownies and enjoyed the full 100mg dose.

Downtown Dispensary's line of in-house vape cartridges, iLava, won solid reviews. One of our reviewers noted that he "used to be skeptical of the CO2 liquid concentrate pens, preferring the solid concentrates like shatter and wax. But the ease and convenience coupled with quality taste profiles is hard to argue with. And iLava cartridges rival the strength of solids (unless we're talking about going buck wild on an e-nail, but that's for... younger folk, I guess). Green thumbs up!" Another wrote: "This has a good, smooth taste. Just the right amount of stoney to watch Netflix and eat Reese's Pieces."

iLava Touch is a 2.8-ounce jar of topical cream featuring 550mg of THC and CBD oil along with a blend of essential oils assembled by a clinical aromatherapist. The cream produced astonishing results for our reviewers. One of our reviewers was sold on it: "I have severe MS and I have tried many creams. This helps both the nerve pain and with muscle cramps." Another found it "awesome, like rubbing mint chocolate-chip ice cream on your skin—all minty and cooling. It's the perfect viscosity for a massage after a long day. If you share this lotion, it would be pretty easy to convince someone to give you one." Another noted that the results weren't dramatic, but after using it several nights in a row, she noticed a difference in knee pain and sore muscles in her back. 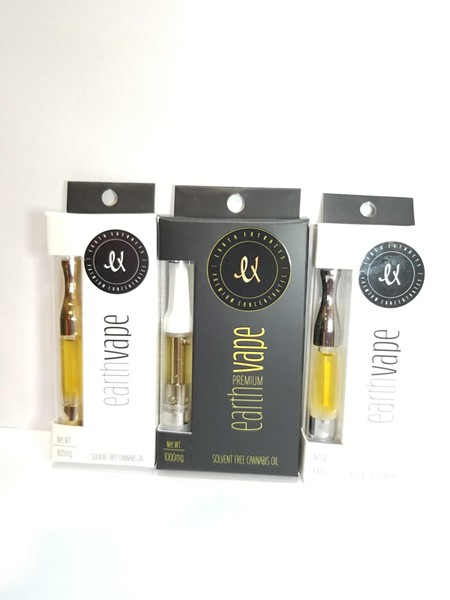 Earthvape is Earth's Healing own line of vape pens. They make their own oil with a hydrocarbon extract process followed by a pre-processing filtration to remove unwanted plant material followed by two distilling sessions to refine it into a solvent-less golden oil that tests at 95 percent cannabinoids. After that, the team starts on the crafting side, adding various terpines to enrich the flavor and unleash the entourage effect that enhances the high. The goal: To keep the essence you get from the plant. We found Earthvapes to have a smooth flavor with a long-lasting but not foggy high. As one reviewer noted: "I'm having a hard time finding anything wrong with this."

Desert Bloom Re-Leaf Center's aphrodisiac chocolate truffles are part of the company's Herbal Alchemy line, which is designed to mix the healing benefits of cannabis with other natural herbs. Launched on Valentine's Day, the chocolate aphrodisiacs—which come in formulas designed for both men and women—include natural libido enhancers like black maca and panax ginseng. Desert Bloom owner Aari Ruben says it's "based on herbalist literature from centuries past. It's not Viagra. One of those things is not going to do anything drastic. It's more of a subtle effect. It's something people need to take regularly for a period of time as a dietary supplement and they should experience an overall increase in the effect that we're focusing on." One of our reviewers said that the truffles "didn't get me too high, but it was an aphrodisiac that tasted like a tincture of Chinese herbs and Echinacea or something. Though actually, I think all weed may be an aphrodisiac." Another noted that "it could have just been a placebo effect, but I definitely felt more frisky after eating 20mg."

Tinctures are a kind of middle ground between smoking weed and eating an edible. Smoking makes a high come on fast but the peak generally fades within an hour, while an edible might not affect you for an hour but the high can last for several hours. With tinctures, you put a dropper of liquid under your tongue for a minute or so and absorb it sublingually before you swallow what's left. Desert Bloom's tinctures vary between being high in CBD (which generally is not intoxicating but can relieve pain and stress) to being high in THC (which is intoxicating). We found that the THC/CBD blend was, overall, a nice, mellow experience. It helped us to destress and relax while still being able to go about our day without being high—although we also found that smoking some of Desert Bloom's Girl Scout Cookie bud gave us quite an extended liftoff. The watermelon flavor didn't really settle on the tongue until the aftertaste. Overall, a nice, mellow experience.

NatureMed's Golden Vape line features both both unflavored cartridges that have refined extracts without terpines if you want to go without additives or with terpines to mimic the flavors of various flowers and enhance the entourage effect. We found the ACDC cartridge to have a very light flavor with a heady, uplifting sensation. Just a light dose kept us kept us mellowed out throughout a recent afternoon while we enjoyed a spring hike through Sabino Canyon.