Get your fill of elote, Tostitos, raspados and more at Rincon Tarasco a la Michoacana

Heather Hoch Raspados in a variety of flavors look as good as they taste at Rincon Tarasco a la Michoacana.

Elotes el Frida has been my main hang for snacking in South Tucson for a while. Of the many elote stands on South 12th Avenue, this is the one you'd want to go to if you're immediately hungry because the others sell raw corn on the cob, while el Frida offers, as the large banner out front suggests, "Elote Cocido." Here, you'll find cocktel de elote (corn with butter, mayo and cotija cheese that's sometimes also called elote en vaso), Tostitos topped with corn, mayo and cotija and simple, cooked corn on the cob (just like the banner says) with cotija, butter and Tajin. From there, you can embellish your elote with any of about 10 different offered hot sauces and fresh squeezed lime juice.

While Elotes el Frida has the corn market, well, cornered, and, indeed, is the only place I've seen selling it cooked and still on the cob, sometimes you want to mix your snacking routine up. I get it. That's why you'll want to know Rincon Tarasco a la Michoacana.

Really, the name says it all: you're getting small bites at this corner stand, done like they do in the Mexican state of Michoacan. The dizzying number of raspado (sno cone), fruit, ice cream and other sweet options cover the large menu board on the north wall. The menu adjacent offers taco trios, tortas and Tostitos. All prices are $5 or under (unless you opt for XL sizes, but, honestly, the smaller sizes are plenty generous).

If you're in the mood for something sweeter, Rincon Tarasco offers everything from simple ice cream and fruit combos (macedonias) to more elaborate raspados with tamarind, mango, pineapple, chile and more. Ever ready to suggest fruit pairing options, the staff at this little neighborhood snack shack is friendly, though working front and back of the house means orders can take a little longer to get out. Mexican-style praline, tropical fruit pico de gallo, fresh coconut, caramel with almonds, saladitos (dried, salted plums) and more offer a range of options, while the crew behind the counter spend that bit of extra time to make each dessert look like a work of sugary art.

If you're not up for blending flavors and creating your own customized treat, the escamochas fruit cocktail has a little bit of everything: sweetened condensed milk, strawberry syrup, a mix of fruit, coconut, pecans and more. It's a good place to start if you're new to the game because you'll get to try a lot out at once without venturing too far into tamarindo or saladito territory.

However, if you're anything like me, dulce doesn't satisfy when you're in the mood to snack. That's where the Tostitos come in—yes, Tostitos like the flavored tortilla chips in the bags. At Rincon Tarasco, your Tostitos can come topped with anything from Clamato to elote with mayo and butter to nacho cheese and jalapenos, all served right out of the bag. The bag serves the functional purpose as a quick, to-go snacking option, but is so delightfully kitsch that I've seen it co-opted by upscale places in an attempt to spice up their dining halls.

Of the Tostitos, the Tostilocos (my new favorite word to say) is an unexpectedly refreshing mix of cabbage, jicama, cucumber, tomato, Chamoy and lime juice that quickly became a favorite. One could argue, in a time of fast food restaurants selling 700-calorie salads, that this is, in fact, a salad. I won't go that far. I will say, the flavors are bright, spicy and fresh, and the only issue you'll have here is making sure that you scarf your chips fast enough so they don't get soggy. 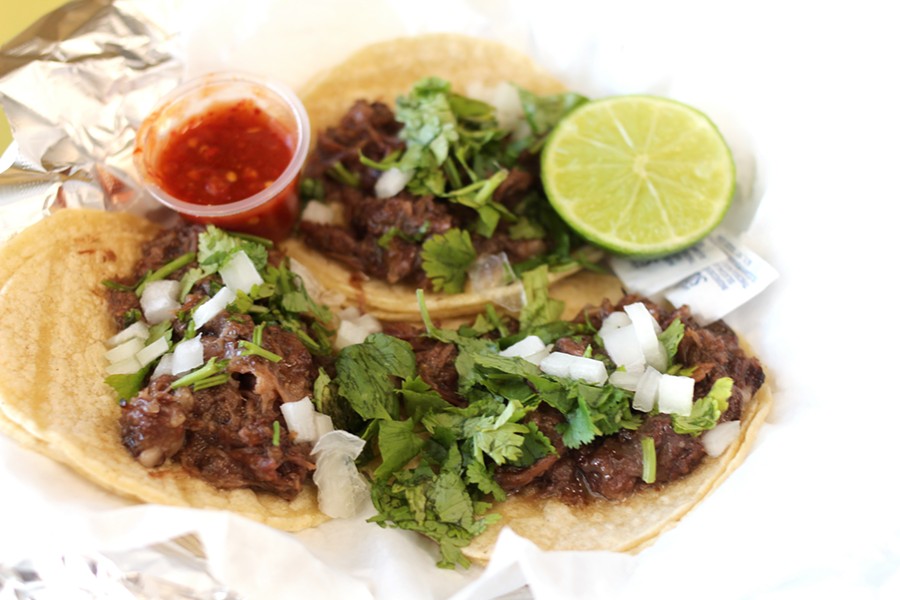 It's not all snacks at Rincon Tarasco, though. Jamon and queso or slow-roasted barbacoa tortas come on perfectly toasted buns with sliced tomato, lettuce, avocado and mayo—a sandwich well worth the $4.75 price. Similarly, you can get three street tacos with cabeza or barbacoa for just $3.75, with salsa, onion and cilantro. While I expected to be satisfied by my under $4 purchase, I didn't expect the cabeza on the tacos to be as juicy, tender and flavorful as it was. These tacos might just be Tucson's best-kept secret.

However, if, after all of those options, you decide you still just want elote. I'm almost sorry to say my allegiance to el Frida has waned after finding Rincon Tarasco. When it comes to the cocktel de elote, Rincon Tarasco's just has more flavor to start with, though both are still definitely good options.

What you'll find, overall, at Rincon Tarasco is a lot of variety and an endless number of combinations. The flavors are big and the prices are small, meaning you can afford to treat yourself a little more often.