In American Mariachi, the women just want their chance to play

I took my seat at Arizona Theatre Company's production of American Mariachi by José Cruz González cautiously optimistic. The cast and crew are predominantly women and/or people of color. The playwright is Mexican American. And, in the bathroom before the performance, there were people speaking Spanish; while that isn't uncommon in Tucson, I haven't heard much in our theaters—possibly because they don't always choose plays that have broad appeal or that feature representation on stage. The teaser looked promising: young women mariachis fighting to be allowed to play alongside their male counterparts. It was so, so much more than that.

The show centers on the Morales family: Federico, Amalia and their daughter, Lucha, struggling to cope with Amalia's sudden onset dementia. When Lucha and her cousin Boli discover that music brings with it Amalia's memories, they decide to form a mariachi band to recreate her favorite song. It's a crazy plan: wowmen can't play mariachi. Lucha has other responsibilities (namely, caring for her mother), her father had forbidden it, and, as it is pointed out in the show, they just can't be mariachis. As the cousins struggle to build a band anyway (they don't even own instruments), they learn about themselves, their dreams, and how to honor tradition while fighting for change in la revolución.

What really struck me about this play was how well it explained feminism, without ever sitting down and spelling it out. The women didn't want to be better than the men. They didn't want to take the place of man. They didn't even really want to forgo their other traditionally expected responsibilities at work or in the home. They just wanted equality via the opportunity to be mariachis. There was never a moment of needing to best the men—the women took their space alongside the men, both in music and in interpersonal issues when cultural expectations often led to uneven power dynamics. While, like in most relationships, there was arguing, the fight for women's rights took a different approach of forgoing who is more or less right and instead challenging each other to listen and share their burdens.

In an era where the word feminist feels like a battle cry, it was a delight to see the battle of the sexes, at least for a few bars, come to an end.

I cannot say enough about the talent of this cast. It is one thing to tell a story on stage, another to sing and play an instrument while you do it, and something even more impressive to do so going back and forth between English and Spanish and playing mariachi. Excluding the two main characters, every actor doubled up roles and played an instrument to accompany the band. Because yes, there was a mariachi band.

And they were stunning. Esteban Dagnino on trumpet, Francisco Javier Molina on violin, Ali Pizarro on vihuela, and Antonio A. Pró on guitarrón were incredibly talented. Additionally, Stephanie Swift Molina on violin was amazing not just at playing and singing, but at bringing heartbreak and joy to the music with the quality of her voice.

This show is cast with talented women (and men). Christen Celaya (Lucha) and Satya Jnani Chavez (Boli) were both instantly likable. They portrayed their parallel but drastically different lives beautifully: best friends and cousins who laugh with, fight, and support each other, sometimes one right after another. Their performances makes the rest of the story believable: Yes, what Lucha and Boli are trying to do is crazy, maybe impossible, but they acknowledge that in a way that admits that they are facing a challenge without forcing us to go along with the world of the story because we have signed up to watch a play. Instead it felt like hearing a story, told by aunties, maybe exaggerated, but based in real life. 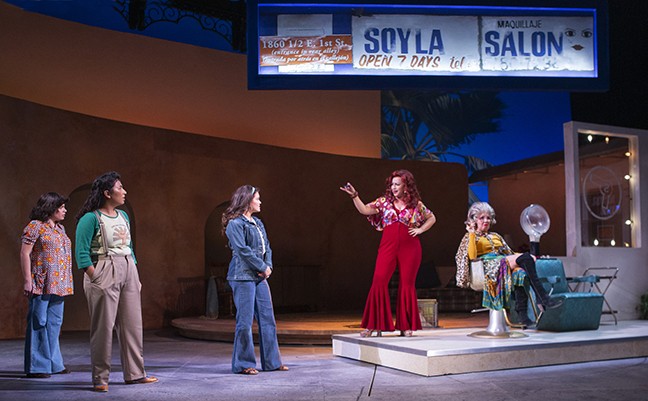 The five women (Christen Celaya, Satya Jnani Chavez, Alicia Coca, Marlene Montes, and Osiris Cuen) who make up the band, all misfits as much as mariachis, are lovable. Their problems are a million miles away from my own and yet completely relatable. Though I have never tried to form a mariachi band or had to care for an ailing parent or even lived in the 1970s, the way they reacted to their individual challenges was familiar. The reactions and solutions to their problems were so human I could put myself in their position. At times, the characters were a little over the top but each actor was so committed to the role it made their antics feel slightly amplified rather than performative.

Coming into the theater, I was a little worried that certain stereotypes would be played upon. And while there were definitely characters too familiar to not be inspired by trope, none felt forced. Accents weren't jokes. Culture wasn't a punchline. Being Mexican-American was a part of the story the characters had to tell, not simply a device to move the plot forward.

The costumes, by Kish Finnegan, are stunning. Character distinction and personality are not lost under the monolith of The 1970s, when the show is set. Instead, we get to know each character a little better through their trousers and protest shirt or prim blouse and skirt or hotpants. But what really blew me away was Tía Carmen. Her dress and hat was a mixture between the mariachi uniform and La Catrina, the archetype of the calaveras that return on to the land of the living on Día de los Muertos. It was beautiful and perfectly augmented with lighting (Carolina Ortiz Herrera) to make her both real as Amalia sees her and as her family might imagine her ghostly presence.

American Mariachi is a story of family, of love, and of tradition. And about how complicated they all are. As a woman trying to find her place in a world that seems to be taking steps backwards instead of forwards, the message hit home for me. And as a Tucsonan, this play was especially meaningful, the music, the set, the Spanglish, all brought back memories of my own, perhaps misplaced, dreams of being a folklorico dancer.

See American Mariachi. And when you do, don't forget to listen. It is a story told in music, after all.

A longer version of this review can be found at tamingofthereview.com, a female-led, local, diverse and community-oriented collective dedicated to coverage of Tucson theatre.