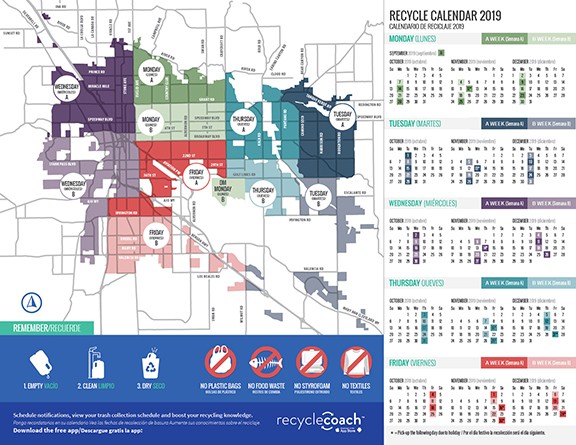 OK, Tucsonans, you can keep recycling for now—but after three strikes, you're out.

As the city grapples with a crashing market for recyclable materials, several big changes are on the horizon, including a reduction of collection service to every other week and a warning that residents who continue to throw trash into their recycling bins may lose the service altogether.

Every other week service begins Sept. 30. Recycling will remain on the same day as trash collection, but now pickup will now be on an A schedule or B schedule.

And residents should beware: If your bin is filled with garbage instead of recyclable materials, you may lose the service altogether. Bins with obvious contamination will be tagged by enforcement staff and picked up by the garbage truck.

"Three tags and a customer will have their recycling bin removed," said Cristina Polsgrove, Public Information Officer for Environmental and General Services.

Environmental Services will be informing residents of the changes via its website, bill inserts and social media, with a series of public meetings now underway to get the word out about the changes.

The department estimates it will pick up the same volume of recyclables because most bins are half-full on weekly pickup, and full bins usually do not have cardboard broken down or have the wrong materials, according to Polsgrove.

The changes come because of the dramatic changes in the recycling market. Four years ago, Tucson made $2 million in revenue from the recycling program, but now the city pays $4 million to $5 million to recycle, according to Tucson City Councilmember Paul Durham.

"That's a hole that we really can't afford to fill," Durham said.

Reducing the service to every other week will save the city $1.3 million.

A big part of the problem is the matter of contamination. Tucson residents are throwing too much trash into their recycling barrels. China, which used to take over a third of the world's recyclable materials, has reduced its acceptable contamination rate to 0.4 percent.

"China woke up to the fact processing recyclables was creating environmental issues, especially for air quality," said Margot Garcia, a member of the city's Environmental Services Advisory Committee. "They didn't want to be seen as a dumping ground anymore with an increasing middle class and changing economy."

Kris Yarter, who chairs the city's Environmental Services Advisory Committee, pushed to reduce the recycling service to every other week after seeing many U.S. cities shutter their entire recycling programs.

"In California, a major company just shut down so there is no place for residents to go recycle their aluminum cans," Yarter said.

Drop in demand and other factors have caused the price of recyclable materials to plummet. At the same time, the recycling plant processing costs have increased, thanks to boosts in minimum wage and a slowdown of conveyor belts in order to capture higher-quality materials.

Tucson now has a 30 percent contamination rate, which is common for cities using single stream, where all material goes into one blue barrel, but city officials hope the changes help cut that in half.

"We hope to see reduction in contamination if people have to have their bin for two weeks," said Polsgrove. "It will make it less easy for them to throw trash in and not think about it."

The goal is to make sure Tucson still has a recycling program that works.

"The way we operate our recycling program is no longer valid, and we need to recreate it for the benefit of Tucson and what makes sense for Tucson," said Carlos de la Torre, director of Environmental and General Services. "We want to be an aspirational city for other southwestern cities."

Contamination became a problem in the early 2000s, when the city shifted from small bins to larger barrels and a "single-stream" system, where the cans, cardboard, paper and other recyclables are sorted at a central location. Too many Tucsonans started throwing garbage into the larger bins.

"We didn't think they were going to throw car engines and dead dogs in the cans," Yarter said.

The city could adopt a "multi-stream" system, with separate bins for cardboard, plastic, cans and the like, but the cost is prohibitive.

"Multi-stream recycling is a very effective way of reducing contamination but the financial costs of providing additional bins and pickups make it not realistic at this time, as it is difficult expensive to switch from one to the other," says Durham.

But reducing the service to every other week carries risks of its own. Andy Quigley, the former director of Environmental Services is concerned people will get frustrated with every other week recycling and participation will drop.

The next decisions to cut costs will very likely be to stop collecting glass and to create a composting program for paper, cardboard, and food waste.

"Not collecting glass would save another $500,000," says Durham, "but at a recent meeting the mayor put a water bottle on the floor and kicked it to symbolize we are kicking the can down the road, because this isn't enough of a cost reduction."

Durham said it costs the city $600,000 annually to recycle paper, so a move to composting it would keep it out of the landfill while saving money for the recycling program.

"Compostable paper and food waste make up 30 percent of the landfill volume, so the landfill will last longer if we compost that," he said.

At a council meeting early this month, Mayor Jonathan Rothschild—who is not seeking reelection—predicted that the council would soon have to raise the $16.65 monthly household fee that covers the cost of recycling, trash collection and the Brush and Bulky and Household Hazardous Waste programs. The fee has not been adjusted in nine years.