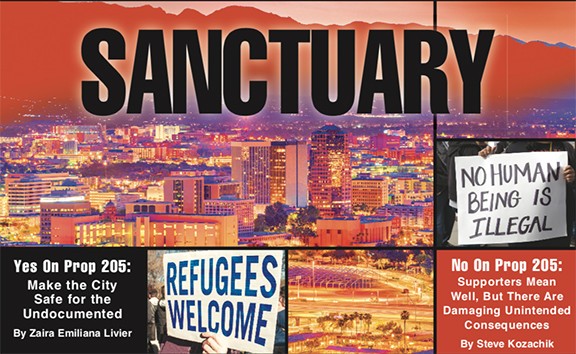 Proposition 205, also known as Tucson Families Free and Together, is a citizen-led "sanctuary city" initiative that intends to limit Tucson Police Department officers' ability to work on immigration-related policing and collaborate with federal immigration agencies, such as ICE and CBP.

The initiative does not specify the meaning of the word "sanctuary," but prohibits TPD from engaging in immigration-related matters and lists specific rules for officers to follow when interacting with the public.

Its authors say it was carefully crafted to not be in violation of SB1070, the controversial Arizona immigration law passed in 2010, but rather fill in its gaps left open to law enforcement's interpretation. Some opponents, including several Democratic city officials, believe the initiative does violate that law and puts the city in danger of lawsuits and funding losses.

If passed, Prop. 205 would establish the following measures, which could not be revoked or changed without a majority vote of Tucson citizens:

When a person is detained in TPD custody, officers are not allowed to develop "reasonable suspicion" (written in SB1070) of undocumented status based on the previous factors, as well as their speech patterns (including an accent), their ability to provide a permanent or local residential address, their physical proximity to undocumented people or presence where undocumented people are known to gather, their presence in a vehicle that appears to be overcrowded, or their name. Officers will be required to document what factors they used to develop reasonable suspicion.

TPD cannot ask about a person's immigration status in schools, hospitals, houses of worship and state and local courthouses.

TPD cannot check a person's immigration status during certain traffic stop encounters, including those of vehicle passengers who are not involved in a crime, and they are required to tell the person(s) when they can leave the traffic stop.

TPD must read a person their Miranda rights before being questioned about their immigration status (which would only happen to a detainee or arrestee under Prop. 205).

TPD cannot ask about a person's immigration status when they are involved in a domestic violence or sexual assault crime investigation.

ICE and CBP officers must sign an agreement stating they will not stop people for routine traffic offenses, such as speeding, within city limits.

TPD can no longer invite or allow federal officers to use their law enforcement training facilities, and prohibits cross-certification of federal agents as Arizona peace officers in the city.

Tucson Weekly invited the Tucson Families Free & Together campaign director Zaira Emiliana Livier to argue in favor of prop 205 and Tucson City Councilman Steve Kozachik to argue against it.