The Family Legacy of Buffalo Exchange

Buffalo Exchange The modern storefront seen by thousands every day as they drive along East Speedway Boulevard.

Sundays are busy at Buffalo Exchange. Customers stream in, hoping to score Diesel jeans or a vintage dress. They move between colorful racks of secondhand western shirts and J.Crew blouses from last season. There's a room for women's shoes with a healthy selection of Stetsons; an activewear section is jam-packed with lightly worn Lululemon leggings.

Not everyone is here to shop though—many people come in to sell the stuff they've just Marie Kando-ed from their closets. Over a long counter, store buyers scour piles of discarded clothes. When a piece catches their eye, they'll shake it out, hold it high for a clear look, then—if it's not folded and placed into the reject pile—comes the close examination: it's vetted for holes, missing buttons and, importantly, armpit stains.

"We check for condition, especially, because we don't wash or mend anything," says Associate Manager Alyssa Sandoval. As we chat, a man in his 20s plops three nearly bursting bags down by a window, then heads out to his car and returns with several more. His aunt, uncle and cousins are moving, he says, and need to downsize.

"Have you sold with us before?" asked Sandoval. It's a question posed to everyone who brings clothes into Buffalo. "We explain the process to them, so they understand why we price items a certain way or why we pass on a piece." Really, it's an attempt to keep people from taking offense. 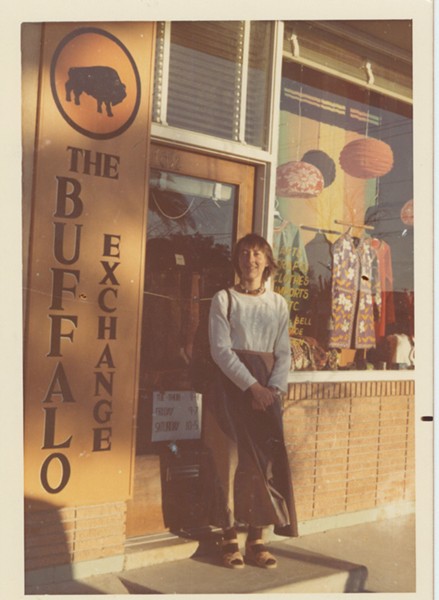 "People are emotionally attached to their clothing, and we're not," Vice President Rebecca Block told me later as we sit in her office. "We're just looking through it and seeing it from the business side." Despite the explanation, people get offended all the time, says Rebecca. It's a hazard of the job.

The buyers at Buffalo Exchange work expeditiously: Explaining, scrutinizing, rejecting, and sometimes, well, buying. And this scene plays out similarly at dozens of other Buffalo Exchanges across the country every day. "Most of our customers think theirs is the only Buffalo Exchange, or if they know there are others, they assume theirs is the original," said owner and founder Kerstin Block. But most of them are wrong. The original, of course, opened in 1974 right here in Tucson.

Kerstin was born in Stockholm in 1942. Her father, an officer in the Swedish Navy, died in an accident when she was 12 years old. "Then it was just me and my mother," she says.

"She worked all the time, so I did all the menial tasks that adults usually do, like going to the grocery store and cooking all the meals."

Her interests though were lay elsewhere. "I was fashion obsessed."

For Kerstin, the uniform of 1950s Sweden didn't cut it. "The regular outfit was a Scottish plaid skirt and cashmere sweater set. That's what you wore all year long. And on top of that was a duffel coat." So she learned to sew and started making her own clothes. She raided the clothes still hanging in her father's closet, hemming, stitching and tucking his old robes and jackets to fit her frame. "I wanted things that no one else had," she says.

Intrepid and independent—and not just in taste—after Kerstin graduated from high school, she boarded a ship bound for New York. The journey across the Atlantic Ocean took five days, and didn't end there. From New York, she traveled on a Greyhound bus to Tucson, where she had a scholarship to study anthropology for one year at the University of Arizona. 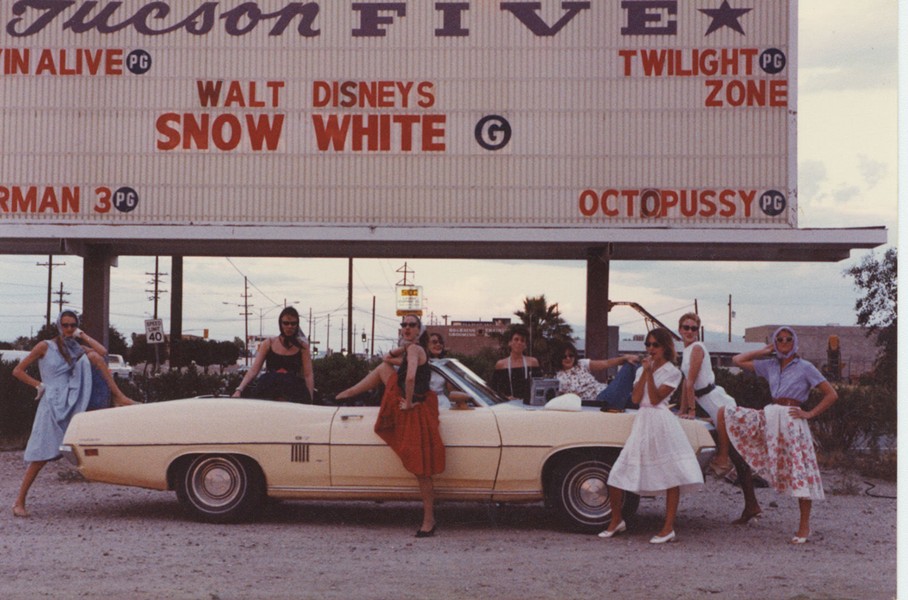 I ask: Was she terrified? Exhilarated? Nervous? She replies, "No, not really. It just seemed like something to do." Indeed, there's a hearty dose of Nordic pragmatism in her to this day.

As Kerstin settled into dorm life and classes, she says people took an interest in her. "It was pretty good to be Swedish at the University of Arizona in 1960. A lot of people wanted to meet you." One of those people was Spencer Block. "He came up to me one day and said 'You don't know me, but I've been watching you.'"

"I was different," she says. "I had straight hair and pigtails and was wearing different clothes. I think he was taken in by that."

The young couple would eventually marry and move between countries and cities—from Sweden to Chicago (where their daughter Rebecca was born) to Eugene and then back to Tucson. Spencer accumulated degrees and careers along the way: a teaching certificate; a Master's in psychology; a job with the Bureau of Indian Affairs; he dropped out of law school, opting instead for library science. Meanwhile, Kerstin finished her degree in anthropology and, back in Tucson, got a job as a designer at the furniture store Sam Levitz.

"But then they fired me because I was too uppity," she says. Uppity is a word that Kerstin uses a number of times in our interview. When I ask her what she means by it, she explains: "I think it means you don't back down, you're self-assured and not going to fold and just say 'yes, you're right,' when challenged."

The self-assuredness that got her fired from Sam Levitz no doubt proved essential when she decided to start her own business: a resale clothing shop in a 400-square foot storefront on Warren Avenue and Speedway ("There's an underpass there now," her daughter Rebecca chimes in.) She called it Buffalo Exchange. "There's no real meaning behind the name. It's just that in Sweden buffalos are kind of exotic, and 'exchange' because we would buy things from our customers and pay in cash or trade or a combination of both." 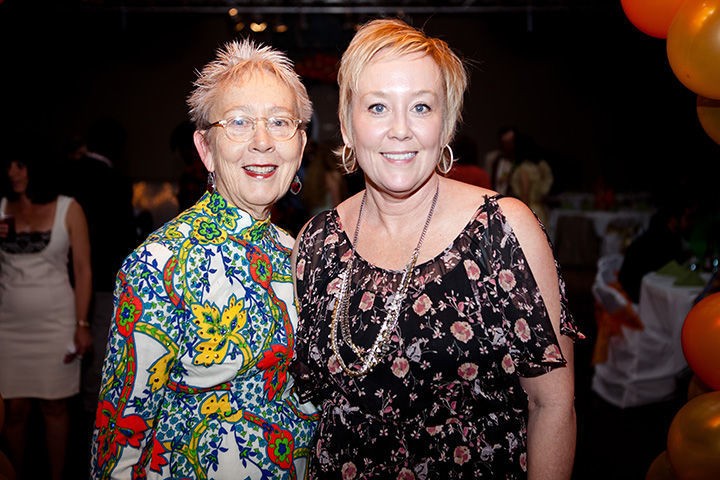 These days, the concept of resale is so mainstream that private equity and venture capital firms pump tens of millions of dollars into online clothing resale shops like ThredUp and Poshmark. But Kerstin says in 1974 she introduced something entirely new. "Thrift stores got all of their inventory from donations, and those people got nothing in return." So, she thought, she could be selective—she could curate—and pay people for the clothes they no longer wanted, but someone else might. "We really pioneered that concept."

Within months, Spencer quit his librarian job and joined her in the business. "He was always for things that were unusual," Kerstin said. Their daughter Rebecca, who was 9 when the first Buffalo Exchange opened, grew up in the shop. "I would walk to the store every day after school. We would help out in the back and straighten the shop up before we went home for the day," she said. "I don't think I got paid until I was like 16." Rebecca has spent most of her career in the company and is now Buffalo's vice president. "I didn't always want to work in the shop, but it was something I knew how to do."

Kerstin said the business grew rapidly. When the shoemaker in the shop next door passed away, they took over his space. Then came expansion outside of Tucson—first Tempe, and then eventually Albuquerque, Seattle and New York. Today, the Blocks told me they own 48 Buffalo Exchanges around the country—they think. "It changes by one or two because we'll close a few and then open a few others each year." (Actually, they own 49). "We've never hit the 50 mark, but we will this year," said Rebecca. 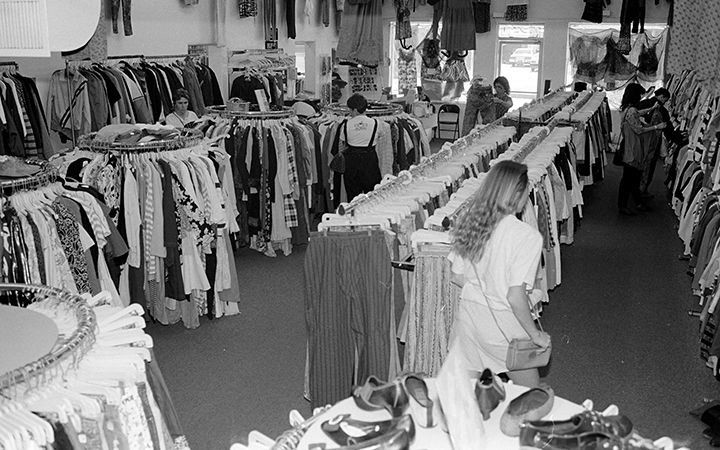 The Blocks are picky when it comes to locations. "We don't do good in suburbs," Kerstin says. "We're better in markets where people are a little alternative." They look for cities with vibrant downtowns or universities. Portland, New York, Austin and of course, Tucson, have long reigned as their top performing stores.

Today Buffalo Exchange employs 850 people and posts an annual revenue of around $88 million, and that size attracts attention. "People want to buy us out all the time," Kerstin said. Lately a lot of those offers have come from cash-rich private equity firms. The Blocks have a few reasons for turning them down. "I don't think someone could buy this business and run it and know what they were doing," says Rebecca. "And when you have private equity they want to tell you how to run your business. That's not something we're interested in doing."

They're interested in making money for themselves, but that's not all. One of Kerstin's objectives since the very early days has been to give people—particular people—jobs. "They weren't necessarily people who would get jobs elsewhere. They'd maybe look a little different or be a little fringe," Kerstin says. "They wanted jobs here because they could feel comfortable." No one has been turned away for piercings, tattoos, bold hair colors—or for being uppity.

Another goal of Kerstin's has been to empower the women who work for her. "You have to develop a certain confidence. You can't be worried that the customer is going to be mad." Their employees receive one-on-one training. "We teach them how to say no, politely and decisively."

I asked them if Buffalo takes any political stances. No, they said. "That's bad for business," Rebecca told me. But they do use their businesses to champion causes they believe in. "We are recyclers. We keep huge amounts of clothes out of landfills," Kerstin said. "I guess that's why we started supporting environmental causes as our first charity, then animal welfare."

"And we've always been pro-gay rights," Rebecca said. "That's not something we back down from."

Over the years, many things have changed at Buffalo Exchange; one of tectonic shift occurred in 2009 when Spencer died of pancreatic cancer. Though he'd been sick for five years, he worked until the very end of his life. "He did slow down, but he never wanted to retire." And Kerstin says she's just like him in that way. "I'm not going to go on forever, because I am getting old. But I don't know what I'd do with myself if I wasn't working."

And to this day, she has plenty of work, especially because Buffalo Exchange is not her only business. In 2014 Kerstin opened the Buffalo Trading Post on the west side of Tucson, close to her home. She describes the store as the older sibling to Buffalo Exchange, specializing in vintage housewares and Mexican imports. She also owns a cafe, restaurant and is in the process of opening her second bed and breakfast.

While Kerstin acknowledges that Buffalo Exchange will outlive her, she said she doesn't worry about its future. "We have a never ending supply of employees who want this business to go on. It's always easy for us to find people to take this business to the next level, and that gives me faith."

For now, Kerstin continues to adjust the world around her—just as she did with the clothes in her father's closet—into something special, something no one else has.

Vanessa Bartchfield is a producer/reporter for Arizona Public Media.