Evil Dead Double Feature. For Halloween, the Loft Cinema is screening one of the most  successful independent horror films ever, and following it up with its ridiculously over-the-top successor. The frights begin with The Evil Dead (1981), a cornerstone of the cabin-in-the-woods horror genre, and continue with Army of Darkness (1992), part three of the series, which sees main  character Ash transported back to the evil-skeleton-plagued middle ages. The evening goes from chilling horror flick to Gothic fantasy romp. And to make it even more fun, there will be spooky prizes for best costumes, and free Halloween candy for everyone. The Evil Dead screening is of a new 4K digital restoration with 5.1 surround sound and a reimagined music score by original composer Joseph LoDuca. 7:30 to 10:30 p.m. Thursday, Oct. 31. 3233 E. Speedway Blvd. $12.

Repo Man. Harry Dean Stanton and Emilio Estevez team up for this 80s sci-fi satire about punk life, with themes that echo into today. In this case, being a repo man is a little more complicated than it might seem, when the characters wind up with a mysterious Chevy Malibu with a "cop-evaporating alien force" in the trunk. For the 35th anniversary of this blue collar punk rock masterpiece, the Loft invites you to "do some crimes." 10 to 11:45 p.m. Friday, Nov. 1, and Saturday, Nov. 2. 3233 E. Speedway Blvd. $8.

Apollo Remembered. In commemoration of the 50th anniversary of the first manned lunar landing, Oro Valley-based White Eagle Aerospace is hosting a screening of this 70-minute audio-visual presentation narrated by aerospace historian J. Terry White. This screening at the Murphy-Wilmot library covers the events of the Apollo program, features an informative model display and will conclude with an interactive Q&A session. Attendance capacity for this event is 100; seats are first-come, first-serve. 2 to 3:30 p.m. Tuesday, Nov. 5. 530 N. Wilmot Road. Free. 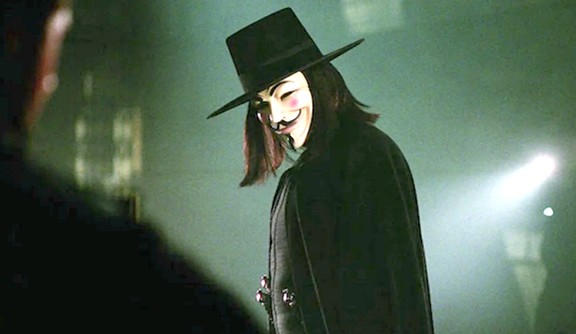 V For Vendetta. Remember, remember the fifth of November! For this very apropos Tuesday screening, Harkins Theatres is showing this anti-hero comic book classic. Based on Alan Moore's graphic novel of the same name, V for Vendetta depicts the ever-romantic struggle of overthrowing a neo-fascist totalitarian regime in the not-too-distant future. Even if you haven't seen the film, you'll recognize the mask. And if you have seen the film, chances are you've been inspired to overthrow the nearest governing body. 7 p.m. Tuesday, Nov. 5. 5455 S. Calle Santa Cruz & 5755 W. Arizona Pavilions Drive. $5.

A Night With Janis Joplin: The Broadway Musical. It ain't easy capturing the sound and spirit of the queen of rock 'n' roll. It takes another queen in her own right. Luckily for you, Mary Bridget Davies is up to the challenge. This screening of a Tony-nominated Broadway musical follows the music and story of Janis Joplin, backed by a band of hippies, as she performs in 1970. This special screening at the Loft Cinema even includes a post-film Q&A with Janis Joplin's brother, Michael Joplin. 7:30 to 10 p.m. Wednesday, Nov. 6. 3233 E. Speedway Blvd. $15.

Tucson Comic-Con 2019. Sure, sure, there's a lot more going on at Tucson's own Comic-Con than film screenings. But there just so happens to be so many movie-related events, it's important to highlight them here. Movie events include a discussion of the reality of swords at "Swordmaking: Separating Myth from Reality in Film;" a celebration of the 30th anniversary of Bill & Ted's Excellent Adventure; how filmmakers made a "Live-Action Comic Book Feature Film" right here in Tucson; and even a showdown of some of the very best movie robots. There's just too much awesome geekiness happening at this year's Tucson Comic-Con, so head over to tucsoncomic-con.com for a full schedule. Friday, Nov. 1 through Sunday, Nov. 3. At the Tucson Convention Center, 260 S. Church Ave.