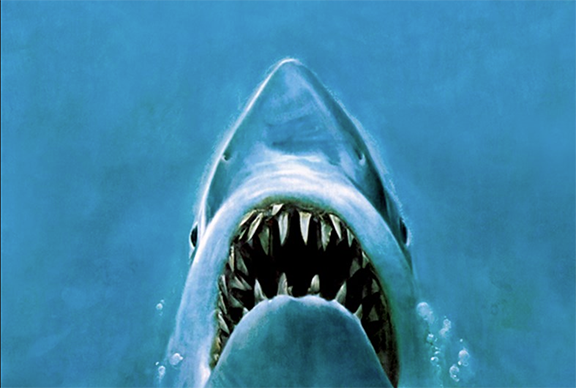 Jaws. With the summer heat rising, you might be inclined to hop into the nearest body of water possible. But think twice! Because The Loft Cinema is bringing the most iconic killer shark to town with their seasonal screening of Steven Spielberg's Jaws. Get out of the water and into the theater! 10 p.m. Friday, July 26, and Saturday, July 27. 3233 E. Speedway Blvd. $8

Stop Making Sense. This is a party, this is a disco. The Loft Cinema is celebrating the 35th anniversary of "the greatest concert film of all-time" with a Talking Heads party. Shot over three nights at Hollywood's Pantages Theater in December 1983, Stop Making Sense perfectly captures the power and funkiness of the Talking Heads. Plus, you get to see David Byrne in The Big Suit! There will be singing, dancing and plenty of fun(k). 7:30 to 9:15 p.m. Wednesday, July 31. 3233 E. Speedway Blvd. $12.

Arizona Sunburn Film Festival. The Screening Room will be home base for all things film and Arizona when they host the Sunburn Film Festival. Over two days, they will be screening over a dozen local, independent films, both short and full length. With film titles like "Jesus Christ and a Car Salesman," "Tank Man," and "Vanishing River," what's not to love? 7 p.m. Friday, July 26, and 5 p.m. Saturday, July 27. 127 E. Congress Street.

Purple Rain Sing-Along. Tucson loves Prince so much a giant mural just isn't enough. The Loft Cinema is screening a sing-along on the same day the film opened in theaters 35 years ago. But it's more than just a sing-along! There will also be a Prince music video salon, a Prince costume contest and purple glow sticks for everyone. 7 to 9:30 p.m. Saturday, July 27. 3233 E. Speedway Blvd. $12.

Return to Earth. Tucson Endurance Performance Center is screening an encore presentation of this mountain bike film about "the simple act of living in those moments." What better way to break free of the dread of modernity than by getting out there and seeing the world via mountain bike? The screening is free, but donations will go toward the 100-Acre Wood Bike Park. Hosted in conjunction with Sonoran Desert Mountain Bicyclists. 7 to 9 p.m. Saturday, July 27. 4811 E. Grant Road. Free (donations accepted).

First Man (Screening for UA alumni). The UA College of Science is celebrating "moonfest" and the 50th anniversary of the Apollo 11 landing by screening the newest film from Damien Chazelle (La La Land, Whiplash). This Oscar-winning film features Ryan Gosling as Neil Armstrong, and examines the life of the first man on the moon. This event is for UA alumni, friends and family, so please sign up online with the name and email address of a UA alumna/us. Six tickets are allowed per registrant. The first 100 guests to sign up will receive a free gift. Chances are, there are quite a few of you around town. 3 to 5:30 p.m. Saturday, July 27. At the Gallagher Theater in the UA Student Union, 1303 E. University Blvd. ■