Star Wars: The Original Trilogy. The Fox Theatre, in partnership with Film Fest Tucson, is screening all three original Star Wars films this weekend. It's A New Hope on Friday, The Empire Strikes Back on Saturday and Return of the Jedi on Sunday. Here's your chance to see every film of the original trilogy on the big screen, the way it was meant to be experienced. The ferns of Endor never looked so good! A New Hope: 7 to 9 p.m. Friday, June 28. The Empire Strikes Back: 7 to 9 p.m. Saturday, June 29. Return of the Jedi: 2 to 4 p.m. Sunday, June 30. 17 W. Congress Street. $10 each or $25 for all three.

Before Stonewall. The Screening Room and Tucson Pride are teaming up to show a new restoration of this documentary that details the history of the queer community before the Stonewall Riots began the major gay rights movement. In honor of the 50th anniversary of the Stonewall Riots, they will also host a social hour and mini resource fair. 6 to 9 p.m. Friday, June 28. 127 E. Congress Street.

Woodstock: The Director's Cut. This documentary covers the most iconic music festival of them all from both the stage and the audience. Released a year after Woodstock, it won the Oscar for best documentary, and this director's cut gives you even more of the hippie goodness. This screening is also part of the Loft's fundraiser to restore and expand their marquee. 4:30 p.m. Saturday, June 29. 3233 East Speedway Blvd. $80.

Wall-E (Free, Bike-In Movie). The Living Streets Alliance is hosting a free screening of Pixar's best movie. (Yeah, I said it.) The public is invited to Mitchell Park for a "completely off-grid" outdoor movie experience. And what better setting to enjoy a lovable children's movie about the horrors of pollution and social stagnation? 7:30 to 9:30 p.m. Friday, June 28. 1100 E. Mitchell Street. Free.

Do The Right Thing. The Loft Cinema is screening Spike Lee's examination of Brooklyn life on the same day it was released to theatres in 1989. The film takes a look at race and prejudice in modern America, showing how a riot can erupt out of a series of small misunderstandings. The screening is of a 4K digital restoration. 2 p.m. Sunday, June 30. 3233 East Speedway Blvd. Regular admission prices. 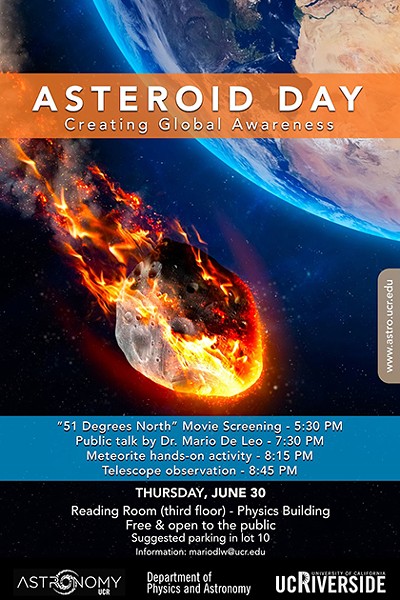 Asteroid Day. UA's Flandrau Science Center and Planetarium is hosting a day of special presentations and screenings all about space rocks. The public is invited to learn about discoveries from the OSIRIS-REx mission, asteroids, and how we ourselves are made of stars. 12:30 p.m: We Are Stars. 1 p.m. Asteroid: Mission Extreme. 2 p.m: Special Presentation: OSIRIS-REx Discoveries. 3 p.m: Great White Shark. 4 p.m: Special Presentation: Fire In the Sky. Noon to 5 p.m. Sunday, June 30. 1601 E. University Blvd. $5 exhibits, $5 shows.

Mandy. This 2018 cult-classic-from-on-release features Nicholas Cage as a lumberjack fighting cultists and supernatural entities. What more could you want? Well, how about the fact it's also a combination of multiple '80s film tropes: oversaturated colors, vigilantism, slasher and more. Throw some LSD into the mix and you have a recipe for fun. 10 p.m. Friday, June 28, and Saturday, June 29. $8. The Loft Cinema. 3233 East Speedway Boulevard.