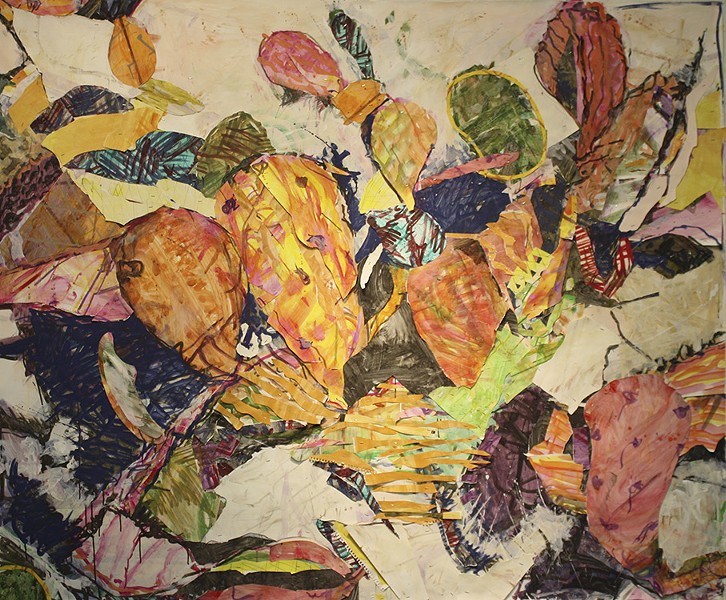 Tucson artist Dirk J. Arnold's neon "Gateway Saguaro" made the New York Times' Travel section last weekend, in the form of a dazzling colored photo that easily took up two-thirds of the section's front page. The story it illustrated was titled "Tucson: An Unsung Architectural Oasis."

It was a nice reward for Arnold, who has spent years documenting Tucson's historic neon signs and endangered architecture, making not only refrigerator magnets but detailed mini-architectural reconstructions of beloved local buildings.

Arnold and some 20 of his fellow artists in the Citizens Artist Collective open a show of their work with a reception at Etherton Gallery this Saturday night. (The gallery also got a nod in The Times as a "prominent fixture on the international art scene and one of the pre-eminent art and photo galleries in the Southwest."

Besides Arnold, the show exhibits work by figurative painter Titus Castanza, Nick Georgiou, who makes 3-D works out of old newspapers, abstract painter Katherine Josten, and the Tucson Weekly's own Rand Carlson, a cartoonist who also works in paint and tin.

The artists are also staging a book signing for "Citizens Warehouse," a 2013 volume that pictures the work of the member artists and recounts the compelling history of the warehouse district.

A remnant of Tucson's railroad history, the warehouses were conveniently located near the tracks to allow workers to easily transfer goods from the trains to the storage spaces. The warehouse business thrived for decades, as former Tucson Weekly contributor Dave Devine writes in the book, until trucks began to displace the trains.

Like most of Tucson's historic buildings, the warehouses have often been threatened with demolition. Some, like Mat Bevel's longtime studio on Stone Avenue, have been knocked down. Others have been saved thanks to historic preservation activism and artists' sweat equity.

For now, artists make their work in the rehabbed Citizens Warehouse, painting, sculpting, cutting paper and hammering tin "alongside the thunder of the Southern Pacific Railroad," which still blasts past the warehouse at regular intervals. And their exhibition, according to an Etherton press release, reflects the interplay between the artists' "desire to transform the world through art and the desire to preserve the architecture of its creation."