Nostalgia on the Move

Tiny diner puts a modern spin on the classics

A classic burger made with a Beyond Meat vegan patty. A slice of pie with coconut milk whipped cream. A chocolate shake made with non-dairy ice cream, barley malt and almond milk. The SUBSTANCE Coffee Company diner-on-wheels opened in December to serve Tucson classic diner food with a sustainable twist.

As a vegetarian and environmentalist, Karl Poechlauer's diner food shows that beloved classics can be made with more sustainable ingredients while maintaining their deliciousness. While some miss the classic beef burger, the menu has been popular with millennials and Tucson's art scene and is slowly winning over a larger crowd.

"My concession to the mediators is pork," Poechlauer said. "You've got to have bacon and eggs at a diner."

The menu includes always-available breakfast favorites, from French toast to burritos along with burgers, deep-fried mac 'n' cheese, milkshakes, coffee and pie. The food is served in compostable and recycled cups and plates and made from high-quality locally sourced ingredients, like fresh bread from La Baguette Bakery.

"If you want to make a difference, you can't be lazy about it," Poechlauer said. "I want to sell good quality food."

Poechlauer always liked the idea of running a coffee shop, and made this version of his dream into a reality after working unhappily at a desk job.

"It started when my boss didn't let me use my vacation time," Poechlauer said. One perk of the job, however, was it allowed him to save enough to build the tiny diner and get it rolling.

The entire diner is within a 1961 Shasta Airflyte Trailer that Poechlauer renovated down to its iron chassis. To comply with health code rules, the diner is creatively Jenga-puzzled inside the shiny aluminum exterior. Cutting boards fold down over the sink, the refrigerator requires a little yoga to see inside and bar stools pop out under one of the many awnings.

"It was fun putting the puzzle together," he said. "I put everything I had into it."

Poechlauer explained he did most of the remodeling himself with the help of a welder and local metal shop Premier Metals. The ridges along the side are a classic trait of vintage Shastas, Poechlauer explained, so he cut the aluminum sheets to maintain the vintage look.

"I think people like the unique style, it's a little different from a regular food truck," Poechlauer said. "I studied history, so nostalgia is part of my personality. You can keep the old and modernize it, make it better."

Poechlauer expertly navigates his way around the tight space, cooking eggs over a gas stove, brewing coffee at a tiny espresso machine and serving the line outside. Blueberries caramelize in cinnamon sugar on one burner while fries sizzle in the tiny deep fryer on the other side of the grill, producing a smell that takes your brain straight to images of pink neon and Elvis. 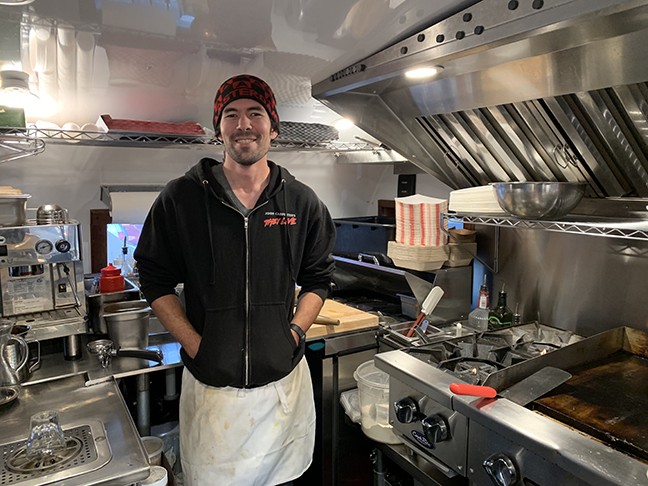 Since opening in December, Poechlauer has set up shop at multiple locations around town including The Loft Cinema, Tucson Hop Shop, Casa Video and occasionally along Fourth Avenue.

Poechlauer got his start cooking while working in kitchens throughout college, and worked for local food truck Fat Noodle for a while, learning the ins and outs of food truck logistics.

"I actually went to school to get out of cooking," Poechlauer said, "and I swore I would only go back to it if it was for myself."

Named SUBSTANCE Coffee Company, the diner isn't actually what the name promises. Poechlauer laughed, describing the diner as almost like a speakeasy or a bodega where the full menu is a pleasant surprise.

"It's almost like a secret that you only find out when you go there," Poechlauer said, and a welcome surprise it is.

While the mac 'n' cheese croquettes are a must, the chocolate milkshake was surprisingly good despite its complete lack of milk. Rich and chocolatey with just the right amount of malt flavor, this shake is worth tracking down the trailer for.