Amos Lee writes gentle folk without lumbering into bland dad rock. Though his electric acoustic and tinkling piano accompaniment often say Nora Jones, Lee sidesteps the dull by blending truthful grit and dark shades into his love-lorn ditties. (Dude may feel "at home in a woman's arms" but he spends "most days alone.") It's this willingness to be vulnerable, this embrace of authentic melancholy, which sets Amos Lee apart from Pop/R&B adult contemporaries like Jack Johnson or John Legend. He's a modern-day James Taylor; that weightiness in song and deep, personal connection to his lyrics. More, the Philly-weaned Lee has recorded in and long been inspired by the Old Pueblo and musical pals Calexico. Note that Lee is playing his most recent release, My New Moon, in its entirety. So one never knows who might show up to sit in. Thursday, September 27 at the Fox Theatre, 17 W. Congress. Doors at 8 p.m. $27-$60. All ages. —B.S. Eliot

Tesla may be the most dedicated hard-rock band alive, if you discount Alice Cooper. Quietly, and 35 years since debut album Mechanical Resonance dropped, these five Sacramento dudes are still "Comin 'Atcha Live." Though they lost Hessian guitar hero Tommy Skeoch, their commitment to heavy, working-class white-boy blues has never been stronger, or better. Seriously, Peter Green had nothing on 'em. (You'll recall singer Jeff Keith teaching himself to sing while driving big rigs cross country.) They may have hopped the nostalgia train at this point, after releasing a greatest hits collection, but a band needs to earn a living. Besides, they still write and record new tunes, and they don't at all suck. Friday, September 28, Anselmo Valencia Tori Amphitheater, 5655 W. Valencia Road. Doors at 8 p.m. $37-$103, All ages. —B.S. Eliot

Houndmouth are the kings of fleeting happiness. They pen anthems for jaded atheists who can still wring joy from this fucked-up world. The small-town Indiana trio could have been weaned on Spoon's "The Way We Get By," because instead of getting all nihilistic in such harsh reality, they jangle, bop and "whoah, whoah" their way into a listener's skull. And when they are at their most poppy, they are most hard-hitting, "Hang on Sedona let me cut you a deal/I'm a little hungover and I may have to steal your soul." Like Arcade Fire, they instantly access nostalgia and then well-document that sinking feeling that nothing will ever again be as good as right now. In "Say It," they offer up their secret for success, or at least survival: "shoot low." You will never be disappointed and you might just have a shit-ton of fun along the way. With Family of the Year on Tuesday, Oct. 2. Rialto Theatre, 318 East Congress St. Doors at 7 p.m. $27-$29. All ages. —B.S. Eliot 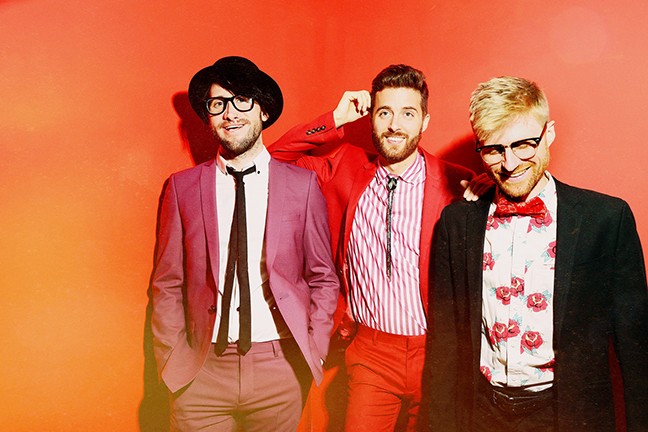 Jukebox the Ghost (JTG) may reference Nabokov in their moniker, but there's nothing pretentious about this D.C. indie pop rock trio—rather they are unapologetically smart and themselves. They love a woman who lets them "Dance like I don't care/You call me Fred Astaire." With guitar, looping piano chords and frog-ass tight drumming, JTG channels heartache and spins it up into sustained exaltation. The only annoying thing may be their unshakeable optimism. Even songs which acknowledge "negative" emotions like loneliness, end with the rapturous reassurance that, gee-whiz and gosh, everyone gets lonely sometimes. The piano tinkles and unjaded gusto make JTG a band woefully out of time. Indeed, they first gained notoriety for an Ace of Bass cover (yes, Ace of Base), a band already dated in their heyday two decades ago. Yet, JTG's brains and emotional heft reward long listens. With Dirty Heads and Just Loud on Wednesday, Oct. 3. Rialto Theatre, 318 East Congress St. Doors at 7 p.m. $36. All ages. —B.S. Eliot