Top 7 science stories of the year

Nearly every field of science is advancing thanks to research and discoveries made in Southern Arizona this year. The technological advancements made in Tucson in 2018 rippled far beyond our region as well, whether it be Phoenix, Mexico or millions of miles away in the vacuum of space. Yes, the University of Arizona maintained its role as the centerpiece of science research in our area, but many other organizations stepped up in 2018, helping to advance the world for the benefit of all.

Here are Tucson Weekly's top 7 science stories of the year, in no particular order:

Autonomous Truck Fleet. In September, Chinese-American artificial intelligence company TuSimple announced an expansion of its Tucson location, adding 500 jobs and 200 autonomous semi trucks to the area. Adding this new fleet of self-driving trucks to the already-active autonomous trucks driving Interstate-10 between Tucson and Phoenix will result in the world's largest autonomous truck fleet. TuSimple Vice President Chuck Price named numerous reasons why the company felt Tucson was the best location to develop self-driving cars, but highlighted regulatory laws as a key factor. TuSimple's expansion is estimated to create an economic impact of over $1 billion dollars in the next five years.

OSIRIS-REx Arrives at Destination. While a lot of news came from the University of Arizona-led NASA space probe OSIRIS-REx this year, perhaps none was more important than its arrival at the asteroid Bennu, and the discoveries from its initial observations. OSIRIS-REx found "hydrated minerals" on the surface of Bennu, indicating the presence of liquid water on the asteroid at some point in the past. OSIRIS-REx is planned to begin orbiting Bennu soon, and will collect a sample of space rocks in 2020 to bring back to Earth in 2023. 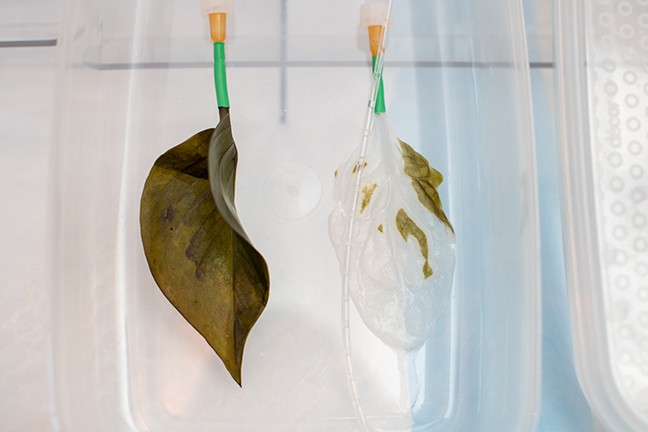 Lung on a Leaf. Scientists at the UA College of Medicine in Phoenix are studying pulmonary diseases like never before. Due to lungs and leaves possessing similar "branching" structures, researchers found a way to study lung diseases on laboratory plants instead of testing on animals. Scientists are studying inflammation caused by lung diseases such as Valley Fever, and can now do so in a controlled and harmless environment. The process provides a 3D tissue constructed by treating a leaf with detergents to remove all traces of plant cells and DNA, leaving only its skeleton. Next, different types of cells are repopulated on the skeleton of the leaf. The stem can be populated with the appropriate cell types, which resemble blood vessels. The team hopes to use human patient cells by the third year of their research.

Ketamine for Parkinson's Patients. Parkinson's main treatment, levodopa, can treat the stiffness and slowness of movement associated with Parkinson's, but after a few months its side effects result in uncontrollable movements in the legs and arms. Two doctors from the UA Department of Neurology may have stumbled upon a positive use for a notorious party drug. While originally using ketamine to treat the pain associated with Parkinson's, researchers found that ketamine can also reduce the tremors set on as a side effect from levodopa. When abused at high doses, ketamine can cause hallucination and dissociation, but at regulated medical levels it can treat pain, depression and possibly levodopa-induced dyskinesia.

Printing Bones. Using a combination of 3D printing and adult stem cells, the UA College of Medicine is helping military personnel recover from serious injuries by using "3D Printed Scaffolds" of bones. Funded by a $2 million Department of Defense grant, researchers are using plastic, bone-shaped frames that can replace missing or broken bone segments. The printed scaffolds are placed in the body and filled in with calcium particles and adult stem cells, serving as templates on which the bones naturally grow. While currently focused on military wounds, researchers also hope the process can help bone cancer patients recover more effectively.

The Future of Lying. Researchers at the UA Center for the Management of Information announced the development of a new system for digitally identifying lies. The system, known as the Automated Virtual Agent for Truth Assessments in Real-Time (or AVATAR), asks users questions and records their facial movements and answers with a high definition video camera. The program measures thousands of signals from the subject's voice, body and eyes. All of this information is routed through an algorithm and the results are produced almost instantly. The program is currently being developed to detect deception at border crossings. Whereas humans can detect lies roughly 54 percent of the time, research has shown that the system is 70 to 92 percent accurate.

Arizona Science Teachers Side with Evolution. In August, the Arizona Science Teachers Association Board of Directors unanimously approved the adoption of an "Evolution Position Statement," in which they found the theory of evolution to be sound. The two-page document states: "There is abundant and consistent evidence from astronomy, physics, biochemistry, geochronology, geology, biology, anthropology, and other sciences that evolution has taken place." The position statement goes on to declare that no science teachers or policy makers should advocate any religious or "creation" science. However, it also says teachers "should be nonjudgmental about the personal beliefs of students."