About a year ago, Jes Baker and a team of body acceptance warriors brought the Body Love Conference to Tucson, and the world took notice.

Baker, best known for her activism blog the Militant Baker, describes herself online as a fiery body advocate and self-love enthusiast. She quit her day job last fall and embraced her role as a person who spreads body acceptance full time.

You might think, being that she spends her time reminding (and, oftentimes, convincing) people that all bodies are worthy of love, Baker would be past bad body days. That's far from the case. In fact, traveling to speak at events pretty much guarantees Baker a rough morning.

"I think it's the florescent lighting and the shitty mirrors, but every time I'm in a hotel—literally every time—I look in the mirror and say 'No one will ever love you naked.' It's horrible and I have that thought every time. And the whole reason I'm there is to speak about how to love your body," Baker said, adding that those feelings don't make her feel like a body love failure.

Baker always includes a bonus tip at the end of her talks: Allow yourself to have bad days.

"The part of body love that is forgotten is realistic body love. Pretending like you love your body every day is not always possible." Baker says the most important thing about having a bad body day is talking about it.

Creating that space is the whole point of the conference. Well, that and coming to recognize that no body needs to be policed.

"A lot of people come to body acceptance and body love because they want to feel beautiful. That's not ultimately the goal," Baker said. "If you need beauty to be able to come to this revolution, do it. That's where a lot of us start, that's what we've been programed to believe is the most important thing—and it is important because being attractive is important for our sexual identity and how we interact with others and relationships and all of those things—but it's not ultimately the end goal. The end goal is complete body autonomy and freedom to be who you are and know that you're valuable just as you are."

A place for everyone

While last year's event got things started, the goal for this year's conference is to be there for everyone.

"Last year was very cis woman focused, female focused. Initially, the idea was that it was, in fact, a woman's conference," Erin Jaye, one of the women making the conference happen, says, adding that the planning committee realized fairly quickly while planning the 2014 event that body acceptance far more than a women's issue. "This is about everybody."

For those of you scratching your head, being cisgender ("cis" for short) means identifying with the gender assigned at birth. Last year, the conference did what it could in terms of inclusivity, offering a transgender panel and media, disability, race and queer discussion. This year, inclusivity is the main goal.

"A lot of transgender issues are erased from the body positive movement just because there hasn't been space made for them." Baker says it's important to her that the conference does provide a space for those conversations. "I obviously share experiences as a cis, straight, white, upper class, fat woman, so it seems, to a lot of people, that my blog is that only. Those are the only authentic stories I can share. But in my brain, what's really important to me is the discussion outside of that."

Baker, who founded the conference, also wanted to make sure men were included this year.

"We tell them to 'man up, shake it off, pretend that you're not bullied, just be a man, goddamnit.' What that tells me is we're having silence around a very oppressive and life ruining issue and silence around oppression is really dangerous." Baker says interrupting those silences is the point. "It's the unheard conversations, the ones that don't have space at all."

In addition to trying to offer support to more groups of people, the conference is also making an effort to bring people into body love earlier in their lives.

"Last year it was 18 and older. But when does all this shit start happening in our minds? When we're young. It's not like we wake up when we're 18 and we're like 'I hate myself,'" Jaye said. "It builds up." This year, attendees aged 12-17 will have talks specifically for them.

For Adiba Nelson, another member of the planning committee, these added conversations are personally important.

"I have a daughter that has special needs—by society's standards she's not normal, she's not okay. She's not supposed to be okay with her limited abilities or the fact that her leg is twisted," Nelson says.

She works to make sure her daughter grows up seeing strong, diverse women embracing themselves. Of course, that starts at home.

"If I'm going to be the parent of a child who is going to love herself, regardless of what society says, then I really need to walk that walk," Nelson says. "Being a mom is tough in itself, but taking seriously the fact that you're your child's first role model, you are the person that they kind of glean everything off of—how they feel about themselves, how they look at themselves—and it was really kind of my time to put my money where my mouth is."

Nelson found the Body Love Conference early in her body acceptance journey, shortly after seeing a fashion show that portrayed fat women in a way she hadn't seen before: beautiful and happy. That, she says, opened her eyes.

"I was a cheerleader and the biggest girl on the squad and I remember feeling very insecure about that. But I have sisters and I have cousins and it's important for me that they see me and women who look like me, so they can then see themselves."

Now, Nelson is on the lookout for body acceptance advocates her daughter will identify with.

"I'm thrilled to see more people with varying abilities in body love. My daughter is a ball of glitter, but for her to grow up and see, little by little, more women of color who are not the café au lait women of color," Nelson said, smiling and trailing off. "I think body love is all encompassing, every single pore, hair follicle. You've got to be able to love who you are as you came in to this world."

And it's not just a matter of Nelson and her daughter seeing themselves represented. Diversity benefits everyone.

"When we don't see people who don't look like us we stay in this place of ignorance," Jaye said. "It doesn't make anybody bad, but it does make us disconnected."

It's a tough field to navigate, but that's where events like the Body Love Conference are really able to help. While the conversation is about people embracing themselves, it's also very much about allowing others to do the same.

"There are so many things involved in this about white privilege and able-bodied privilege. It's not your fault you're privileged, but to recognized it, try to reconcile with that and be more inclusive," Jaye says. "Ask more questions, reach out, want to know what those experiences are and how you can have a positive impact on the world and not a negative one."

Luckily, that is happening. It's just a matter of educating more people about the movement and everyone being each other's allies. It's about support.

"I have a daughter who I know is going to be impacted in the most positive way—I love it," Nelson said. "I'm thrilled."

And support is very evident sitting in a room with these three women. In two hours, the three exchanged no fewer than 15 high fives.

Jaye made a point to note one of those high-fives verbally: one congratulating Baker on her decision to take a step back from the lead role in planning this conference she started to write her upcoming book Things No One Will Tell Fat Girls.

The book, of course, is another avenue for Baker to talk about body acceptance—and despite what the title may be, it's not just a book for fat girls.

"It's for people who have bodies that they've been told are not okay—so, everyone," Baker says of the book.

Rebelling against the perception of making our bodies good enough is, after all, what brings many people to the body acceptance movement.

After the 2014 conference, Baker got requests for more, widespread body love. The next conference, she announced, would be bigger and better. A longer, more inclusive conference at a larger venue, with bigger name speakers. Body Love to the max.

Turns out that old adage is right—change comes slow.

On Jan. 1, Baker announced the planning committee was putting off the big "national/international" conference for another year. The body love crew wanted to make sure they had time to do the event right: by finding a location that could make the event accessible and inclusive and having more time to plan. Details for 2016's big conference are still being decided.

The conference planning committee is small, with the website listing just 14 people on the team, and the fact is, planning big events like this takes time.

"We know the utopia we want to get to, but the reality is the steps to that are very slow and small," Baker says, adding she feels pretty comfortable with the slow progression that seems to be taking place between the three years of events. "I think that's just part of it. There's a lot of activists who want to be really idealistic and say 'No! Present utopia now!' and the reality is we can't—it doesn't work like that."

Instead, Tucson gets to keep the Body Love Conference for one more year with the upcoming June "regional conference." Similar to last year in size, Jaye says this year is different in all the important ways—with inclusivity being a priority from day one. The group partnered with Fluxx Studio & Gallery this year, giving them the benefit of nonprofit status, and helping ensure inclusivity of the queer community.

As for the event in Tucson this June, Baker says the conference is a no-frills event. "You're going to be there for the message. It's important for people to know that when they sign up," Baker says. "But it's going to be effective."

This year's regional conference will be June 6 at Pima Community College's West Campus Center for the Arts, starting at 8 a.m. Tickets are $25 and children age 12 to 17 get in for free. For an additional $10, the conference will provide lunch. Childcare for children under 12 will be provided for free during the conference.

For another $10, you can attend a poolside mixer with the conference speakers the day before the event. Then, after the conference, head to Flycatcher for the "Every Body's Beautiful Revue," a body positivity-inspired variety cabaret show. Tickets to that event are $12. Tickets, available at bodyloveconference.com, are on sale until the end of the day on June 2.

The event's motto is "Change your world, love your body." That effort at radical world change, Baker says, is hidden beneath the sweet title of the conference.

"You say 'body love,' you see the memes online that are like, 'my curves are too wide for your narrow mind' and there's all these cute fluffy things and it's easy to get distracted by that, but there is more underneath it," Baker says. "You're stepping out of systemic injustice and it's pretty amazing. It's much more than cute little memes on the internet, although I'm glad people find them and come." 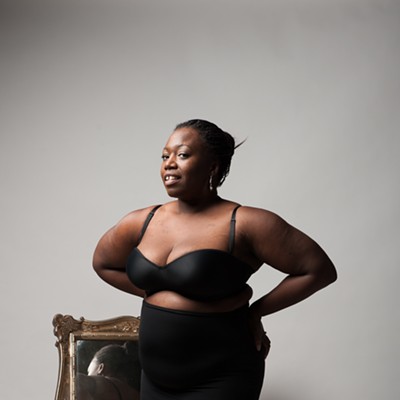