Know Your Product: ...And You Will Know Us By The Trail of Dead

Courtesy Viktor Skot
A look at this list of albums shows just how diverse the music tastes are for the minds behind ...And You Will Know Us By The Trail of Dead. The Austin rock band blends a punk energy, passionate vocals, progressive song structures and wide range of instrumentation. The single "Don't Look Down" off their brand new album X: The Godless Void & Other Stories, still features that mix of energy and passion that caught listeners' ears 25 years ago, but also features introspection and admirable restraint. There is still powerful instrumentation and shouts, but they're awash in a mix of subtle psychedelia. Ahead of their show at 191 Toole, Trail of Dead founding member Conrad Keely told us about some of the most influential albums for him.

It's little wonder Rush occupy an important seat in the throne room of our collective progressive rock imaginations, and in the wake of Neil Peart's passing to the next dimension aboard his Rocinante, we mortals can only mourn the passing of such an immortal talent, not just as a drummer but lyricist and philosopher. Although there is no specific "favorite" early Rush album of mine, this one occupies a special place because growing up it was the one I would practice drumming to. It is also a shining example of Peart's ability to weave rare philosophical perspective, literary imagination, and most importantly optimism and humanism into the idiom of otherwise monosyllabic rock music.

Many hard-core Floyd fans would probably cite this as their favorite album: since many of the band's other albums receive more attention and praise, Meddle becomes the hidden gem, the gateway between early, experimental Floyd and their more successful later albums. It isn't just the grandiosity of Side B's single-track "Echoes" that does it for me, however. It's also the rare pastiche of Side A, which manages to bounce back and forth from the opening hard psych-rock "One Of These Days" and the wistfully melodic "Pillow of Winds", to the straight up blues of "Seamus" and the power-ballad "Fearless." Every element occupies a place, each lending their strength to the whole.

Another one of those rare perfect albums which from its opening track promises to take you on a long, dark journey into disturbing synthesizer melancholia. This album provided essential inspiration to a lot of our early writing because of its unusual choice of harmonic structure, the sheer sophistication of which put it on a separate level from other less-ambitious music being made at the time.

Kate Bush Never For Ever

Although everyone seems to absolutely adore the crowning achievement of Hounds Of Love (Christ, how many more covers of Running Up That Hill do we really need?), very little is said about Kate's other amazing albums leading up to it, all of which are brilliant not just because of their compositional prowess but also the sheer audacity of their subject matter - all coming from a mammoth talent who started her recording career at the age of sixteen.  Within this precious duodecimo of songs lurk homages to dead rock stars (Blow Away), the soliloquy of a dead soldier (Army Dreamers), the dread of post-nuclear holocaust (Breathe), a celebration of orchestral string instruments (Violin), a tale of a bride's revenge for her groom's murderer (Wedding List), and a lost descendent pining for their ancestry (All We Ever Look For).  Coupled with unusual cover art, this album was a lot of imagination for a child of nine to take in, but it invariably changed my view on pop music from an early age. 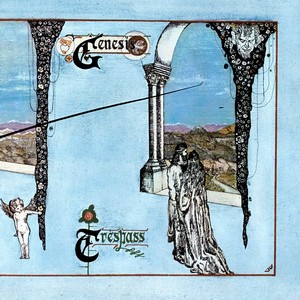 As I look back over this list, I realize that one thing all these albums have in common for me are the fantastical stories they tell, lyrically.  In a time when music has become particularly banal, self-centered, self-aggrandizing, self-serving, self-absorbed, and blatantly shallow in its lyrical content (yes, I'm referring to our current period), it gives comfort to reflect upon a time when people had the courage to write outside of their own personal experience, into realms of myth and imagination.  Nowhere is this probably more true than Genesis' second album, which sarabands lyrically across a vast and otherworldly terrain of subject matter. I will not bother to spell it out here, because when I was growing up I didn't read reviews about records to know what to think about them. I went and listened to them. And you should do the same.