Tucson's own legendary Sidewinders have drifted out of the desert to celebrate the 30th anniversary of their album Witchdoctor. Sidewinders (later the Sand Rubies) served as a major player in the late '80s/early '90s Tucson rock scene, formed via a mysterious combination of whatever else was drifting through the Sonoran Desert at the time. Ahead of their celebration show, we asked OG Sidewinder David Slutes about five of his favorite albums:

"As an aside," Slutes tells the Weekly, "I can still remember being in New York for a big national radio show that year and this famous interviewer was asking me about 'desert rock' and the influences that make such a 'unique Arizonan sound.' He clearly was trying to set our identity for his large national audience. Among his questions to that end was asking what I was listening to. I clearly remember blurting out the Cure's Disintegration, Robyn Hitchcock's Queen Elvis and XTC's Oranges and Lemons. Three very British records. It ruined his strategy to evoke some mysterious southwestern juju that create such a 'unique sound.' I wasn't seasoned nor savvy enough to expound on whatever 'rich musical heritage of the border' that he was angling for. Sorry ol' chap!" 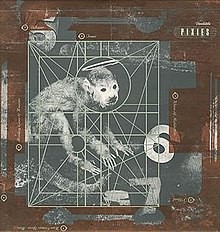 I could not stop listening to this record all year, I don't think anyone I knew felt differently. I actually listen to Surfer Rosa more now, but this felt like the Pixies crowning achievement at the time.

Another record that stands the test of time. It is almost a perfect record and would sound great today if released now.

What an amazing comeback record. Stripping away everything and having Mike Campbell and Jeff Lynne produce this clean simple masterpiece. Little did we know that two records later the Sand Rubies nee Sidewinders would get to work with Mike Campbell and have the EXACT SAME SOUND on the songs he produced for us as Full Moon Fever. That was cool.

Sidewinder bass player Mark Perrodin and I loved this record and played this a lot on the incessant touring we did that year. Again, little did we know we would get a birds eye view of the making of Nevermind the following year. That's a tale for another time.

I love Robyn Hitchcock and this album includes my favorite song of his, "Madonna Of The Wasps."

I hope no one forgets how great this band had become by this record and how amazing, song for song, this record was.

Another band that hasn't been on the radar, but jeez, could Andy Partridge and Colin Moulding write songs. This double album is loaded.