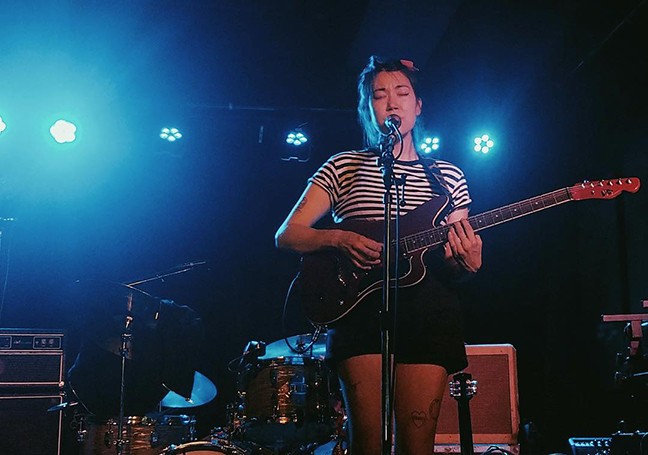 The dynamics in Sasami Ashworth's music go far beyond abrupt volume switches, although they are enamoring and make you whirl. In front of her debut solo album slated to come out later this year, Sasami released the single "Callous," which has already garnered significant acclaim. The grounded singer/songwriter intro is romantic and subtle, telling a tale of introspection and regret. But then she leaps onto her guitar pedals, bursting forth a wall of angular sonic fury. Just as soon as the noise comes it goes, leaving behind crooning distortion as a backdrop for more lonely lyricism. And then a catchier-than-a-fishhook synth lead dribbles in, adding even more to the pile. For how groovy the track is, you wouldn't expect it to be adorned with such fragile lyrics: "When I look back, I can see myself slipping down. Heaven knows I tried." Ahead of Sasami's appearance at next week's HOCO Fest, she shared five albums that changed her life...

The Very Best of Fleetwood Mac

Okay, I know it's not popular to pick a "best of" album, but this is the specific Fleetwood album that changed my life. When I was in middle school and had no money of my own, I used to check CDs out from the public library, load them onto my old PC laptop and just listen the life out of 'em. I grew up listening to Fleetwood with my dad and on the radio, but when I got my paws this two-disc comp and finally listened to their songs over and over again in headphones, I became obsessed. I loved the tone of Stevie's voice, how low Christine's was, how high Lindsey's was, and how different voices were featured on every song. To this day I always appreciate albums with more than one voice—I want to do a whole album of duets.

I remember being in the car when I listened through this album, and specifically when "Cindy Tells Me" came on. It's right after "Baby's On Fire," and I remember thinking I recognized it from a TV commercial or something, since it is definitely one of the sweeter, poppier Eno tunes. Then about a minute in, there is this acerbic, scraping, fuzzed out, sustained Fripp guitar moment that just overtakes the track, kind of out of nowhere. (It's not as deviant sounding on the recently re-mastered version, unsurprisingly.) I thought it was so rad that he just let this super bright, aggressive tone sweep in over a generally pretty mellow pop song. People these days are so afraid of using risky or "erroneous" tones, especially on songs that are generally harmonious.

I instantly connected to Angel's voice in the way that I was deeply drawn to Stevie's. Raw and almost yodel-y, I was addicted to listening to it. The arrangements on this record are sparse and the vocal melodies complex and intimate. Simple chords with sincere, diaristic lyrics. Love.

I studied classical music, so right after graduating from music school I became totally obsessed with only listening to post-punk and angular guitar music. Wire was dark and weird and used chords in a very theoretically "incorrect" way that was exciting to me. They mixed different modes/scales within sections and sang minor thirds over major chords. I know most people probably don't theoretically analyze Wire songs, but I honestly couldn't help myself because conservatory turned me into a music robot. Ha.

After the Gold Rush

I didn't really dig deep into Neil until after I started writing songs for my record. I feel like I don't need to explain why this is one of the most influential albums in my life. It's just a perfect album with perfect songs sung with a perfectly imperfect voice.