February 06, 2020
comment
Sydney-based rock band Death Bells push melody into punk and light into dark. Their imagery and sound can be murky, but a listen to songs like “Echoes” or “Nothing Changes” shows that while Death Bells might be influenced by moody post-punk acts, they aren’t ones to wallow. Death Bells subverts common genre narratives with bright production, cleaner guitar tones, and (gasp) the occasional sense of hope. Ahead of a benefit show to help indigenous peoples recover from the Australian wildfires, Death Bells shared with us some of their favorite albums.

Everyone I’ve shown this album to has enjoyed it - be them punks, metalheads, rockers, cool-guy DJs, or my girlfriend. It’s rare for a dance record to be so unifying, which I think is a testament to how well-put together Compro is. It takes you to a place and is able to weave a rich story (the way that all good albums should) without a single lyric. To me that’s really crazy and impressive.There’s also never been a situation in which I couldn’t listen to this record. – Will

Low Life was the band for me that made everything click. I watched them play at this Sydney venue (The Square I think) that was shutting down. Everyone was going fucking mental to this really weird, cathartic, satirical but sad band. It has a really frantic energy to it but isn’t a frantic record. Watching Mitch (Tolman) and the guys play that night kind of put me on the path of like ‘Ok, I wanna do this’, I wanna play music. And that’s what I do now, which is frankly the best impact any record has had on me to date. Becoming acquainted and eventually good friends with Mitch has shown me where all these snotty, high parody ideas that he riffs on in Dogging came from which is nice too. It’s cool to have a personal link to this really just plainly quite good Australian record. I’ll prob make my kids listen to it one day. – Will 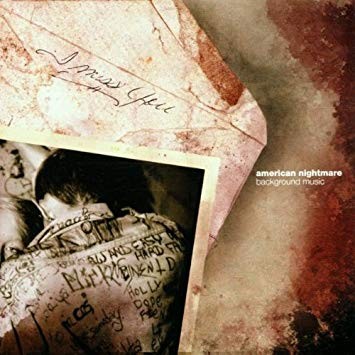 I’m from a town of around 5,000 people that is over an hour from the closest city, but when I was in high school there was an incredible punk and hardcore scene. Any kid who had an alternative bone in their body would be at the youth center whenever a touring band came through and going to these DIY all-ages shows was my first real introduction to music. Like most of my friends back then I would listen to anything that was shown to me by the older kids and when a local band covered an American Nightmare song at the time I didn’t know it was a cover. After some subtle questioning to make it not seem like 15 year old me didn’t know what he was supposed to know I found out it was from a Boston band called American Nightmare. Their debut album Background Music had such an influence on me as it was the first time I realized the difference between great songwriting and standard generic heavy music. The guitar work on that album blew me away and the lyrics were very different to the usual generic tropes that I was used to. It’s fast, aggressive, but the songs all stand out due to their differing structures. Since I have that connection to my teenage years with this album it will always be one of my favorites. – Remy

Toy Boats was an indie project started by my friend Hugo Costin around the time I was finishing high school and getting ready for the real world. Seeing Hugo grow as a musician from playing in punk bands to writing beautiful love songs was a huge influence on me as a musician during my formative years and it felt so special to see it all happen in real-time. Wedding Town is the first and only album under the Toy Boats name and it is a tender collection of songs that feel like they came from the mind of someone twice his age. My mind was blown (and still is) with how he wrote this collection of songs. The subjects of leaving your youth behind and everything that comes with it can often be tired, but Wedding Town is a truly beautiful album with lyrics I could only dream of coming up with myself. Hugo now makes music under his given name Hugo Costin and I highly recommend checking out Wedding Town and his new material. – Remy

Interpol Turn on the Bright Lights

This is an album that helped usher in a new era of rock songs around the turn of the century that is widely regarded as a modern classic. My connection to Turn on the Bright Lights started when I was around 14 thanks to a kid in my class. He was an amazing skateboarder and would put his skate videos on Youtube with backing music and "Obstacle 1" by Interpol and "Reptilla" by The Strokes were in his videos. I love the guitars on this album so much and how they dance around each other while still being mostly simplistic parts. The way the album sounds is also a huge influence on myself as a budding engineer and is a prime example of how you don’t need incredible gear to make a great album. – Remy

I think I first heard "Stella Was A Diver" when I was finishing high school. The lyrics are utter nonsense, but sung in such an impactful way. You’re forced to take it seriously, and the music behind it is so magical and dynamic. I think that’s the funny thing about Turn on the Bright Lights; Paul sings in tongues about these really specific personal situations, and it all gets a bit absurd but you can’t not listen to it and feel it. To me, this record obviously has that massive post-9/11 New York City association which you can just hear a little bit maybe. It’s so sobering to think about the catastrophic surrounding in which it was released. Interesting stuff. Definitely the record I’ll always come back to when I’ve run out of new stuff to listen to. – Will