Saturday, June 15, 6 p.m. ​Tickets cost $65 and include drinks and samples from over 30 local Mexican restaurants, breweries and distilleries, live music, art exhibitors and more.
​Limited tickets for youth ages 11-17 will be available at the door for $10/each when attending with an adult who has pre-purchased a Tucson 23 ticket. Children 10 and younger are free.
JW Marriott Tucson Starr Pass, 3800 W Starr Pass Blvd.
saaca.org/tucson23.html

We don't have to tell you that burritos are amazing. That is general knowledge. But how do you make a burrito better? Make it ginormous and wrap it in bacon. How do you make it even better? Make it one of the more than 20 different dishes you can taste at a festival celebrating all things Mexican food and you've got a winner.

Summer is here, temperatures are ramping up and that means it's time for the first of three SAACA summer festivals celebrating the incomparable Mexican food Tucsonans know and love.

From taco trucks to long-standing establishments, Southern Arizona is packed full of amazing options for Mexican food, with the highest density clustered in a 23-mile area including the City of South Tucson, downtown and lower-midtown. The Southern Arizona Arts and Cultural Alliance has set out to celebrate the rich history, culture and food that these eateries bring to our community at their fourth annual Tucson 23 Mexican Food Festival.

"You can find everything from traditional fish or barbacoa tacos to signature and high-end dishes," explained SAACA's Marketing Manager David Seeber.

The festival will take over the JW Marriott Tucson Starr Pass for a night of food, drink, entertainment, cultural celebration and a lot of fun.

The local spot bringing the wow-factor with their signature bacon-wrapped burritos, a hit from their first festival appearance last year, is Percherones. Formerly known as What a burro, this local establishment operates two food trucks and a new permanent location at the Boxyard on 4th Avenue.

"Many people are not familiar with this type of presentation," said Guillermo Valencia, who collaborates with his brother, Percherones owner Diego Armando. "We are giving a turn to the traditional way people think of burritos."

Valencia explained that their inspiration comes from traditional Sonoran food known as percherones, meaning clydesdale or draft horse, for an enormous burrito. If you think about the fact burrito means little donkey, burro means donkey and now this levels up to a Clydesdale, you can only imagine that these bad boys are a meal to share.

"We took that Sonoran influence and modified it to fit in with Arizona Mexican cuisine," Valencia said. "It has become very popular among Tucsonans."

Those looking for a more traditional dish will be happy to find the stuffed poblanos that Rigo's Restaurant are planning for their fourth festival appearance.

"This year, Chef Oscar Castelum is bringing a traditional dish from Southern Mexico, a chile poblano stuffed with chicken, topped with white sauce and pomegranates," said Gloria Santana of Rigo's Restaurant, explaining that the festival is a way for them to show the community what they have to offer.

"A lot of people don't know how many dishes we have," Santana said. "People come in and say 'I want to try what I had at the festival,' they ask for the salsa we used and the dishes."

For both restaurants, the festival is a way of expanding their reach into the community, whether that be Tucson or further around the region. Rigo's has a new restaurant opening right around the date of the festival in Benson, and will have menus on hand to share. Percherones is thinking of expanding even further, looking beyond Arizona state lines.

"Last year we noticed that some people came from neighboring states," Valencia said of the festival crowd. "We are looking at expanding our business so it's important to know where people are coming from."

SAACA and partner Visit Tucson are helping the festival have lasting effect with their second installment of the Taste the 23 Restaurant Week taking place days following the festival. Participating restaurants will have specials at their locations to encourage event-goers to seek them out around town. Also partnered with Yelp this year, SAACA will have maps at the festival with all of the featured eateries pinned so circle your favorites as you make your way through the samples.

Big name Tucson staples will be represented at the festival, with all four branches of the El Charro family tree of restaurants scheduled to attend, among modern favorites Penca, Seis and Reforma. Other attending eateries include Taqueria Pico De Gallo, Mariscos Baja Mar, El Antojo Poblano, Mariscos Chihuahua and more with restaurants still being added to the list.

"We really want to highlight the history of the Mexican food in Tucson, a lot of the restaurants on the 23 miles are well established in the community," Seeber said, "and new restaurants are looking to expand their reach into the community and display what they have to offer the culinary scene." 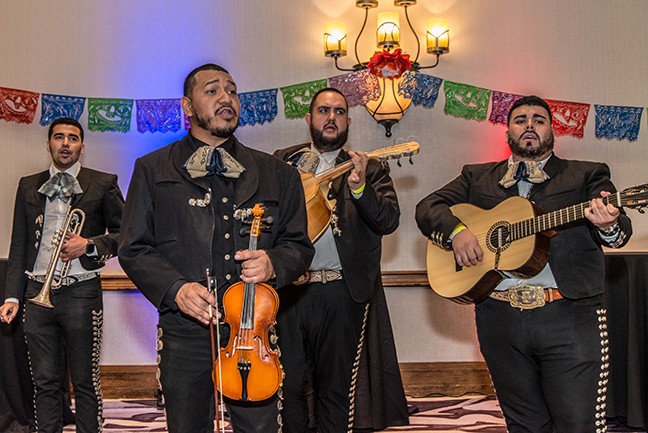 Among such great company, it is a special opportunity for local restaurateurs to show off their very best.

"To represent the city is really important," said Santana, "and we are so happy to participate in the community."

While the festival showcases Tucson restaurants and our local community, cultural and culinary richness from regions spanning Mexico will be on display. Food from the regions of Sonora, Baja California, Puebla, Chihuahua, Mexico City and more will be represented from simple taco stands to sophisticated dining.

"Putting all those different kinds of restaurants in one arena in a family environment really brings everyone together," said Seeber.