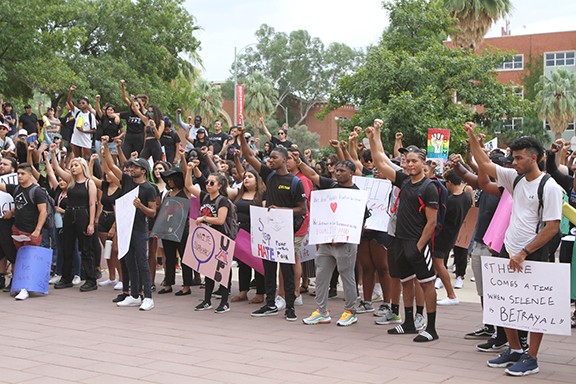 After an outpouring of anger, along with a rallying cry for justice from the University of Arizona's student body, two white undergraduate students were arrested for an attack on a black student last week.

Undergraduates Matthew Frazier and Matthew Rawlings were arrested Friday morning and booked into the Pima County Jail where the county attorney's office will review the case for formal charges, according to police.

In the police report, the black student, whose name has not been released, reported that Frazier and Rawlings called him the N-word and punched and kicked him near the Arbol de la Vida dormitory around 11:30 p.m. on Tuesday, Sept. 10.

Eyewitnesses also reported seeing the incident occur and the victim was with another student at the time.

The release of the students' names, as well as the incident report, were part of the demands of the Black Student Union, a campus organization that sounded the alarm on what they believed was improper handling of the case by the UAPD and UA administration.

On Thursday, the BSU released details of the incident on social media, reporting that police had not arrested the white students, and instead only required them to take social justice diversion classes. They also listed their demands and announced a protest they would stage last Friday.

In a written statement to the campus on Thursday, President Robert Robbins expressed "disappointment" and "regret" over the incident, stating he would work with the administration to reach a "comprehensive response to issues of bias and discrimination on campus."

"I want our community to know that racism, bias and violence will not be tolerated at the university," he wrote. "Inclusion is one of our primary values, and this is one of those moments that defines us and our community at the University of Arizona."

On Friday afternoon in front of the campus administration building, hundreds of students bearing protest signs like "Justice loading" and "Black Lives Matter" gathered to protest the handling of the incident. Some called out directly to the school's president, chanting "Bring Bobby out."

The announcement that the white students had been arrested came via Twitter and email about an hour before the protest began.

"Earlier today, the University of Arizona Police Department arrested the two students alleged to have assaulted an African American student on campus Tuesday evening," wrote Chief Brian Seastone. "The students were both charged with class 1 misdemeanor assault. We are committed to ensuring this campus is a safe and inclusive environment for the entire community."

The protest, put together by the BSU, began around 2 p.m., with members of the club standing on the administration building steps leading chants of "My name is not N-word" and "Hands up. Don't shoot."

BSU member Maryan Hassan was the first to speak at the megaphone, expressing outrage over the lack of action taken by the UAPD and college.

"I think they (UAPD) need to be held accountable not just for this incident but all the other incidents that were not looked at and acknowledged," she said. "They aren't doing their job."

The larger community outside the university showed support and solidarity with the students, with a City of South Tucson councilman speaking and a representative of Tucson's Black Lives Matter addressing the crowd.

The group of protesters then moved towards Main Gate Square, where they received a police escort down University Boulevard. When the large group returned to Old Main, BSU members read their demands to the college.

As well as demanding information about the case be released, the BSU called for explanation and consequences for the assaulters and the UAPD.

"We demand an explanation of why the racial aspect of the assault wasn't included in the public report and the assault was not treated as a hate crime," their written statement read. "We demand a reassessment and retraining of the University of Arizona Police Department officer's cultural competency training."

In the police report, released last Friday, the case was referred to as an "Assault/minor injury" with "possible bias."

The victim stated the two students started screaming at him and a friend before running up, tackling him and punching him in the head "like five times." He said he was also kicked on the ground by the second student.

Police photographed several minor injuries on the victim, including scrapes on his hands and arms. Initially, the victim did not want to press charges.

Fraizer denied ever leaving his home or being intoxicated and also claimed not to know how he got the blood on his shirt.

Rawlings told police that a black male had yelled at them from across the street and the fight began, though when asked, he didn't remember who threw the first punch. He also said he tried to kick Frazier to end the fight, but can't recall who he was actually kicking.

In a follow up interview by UAPD with the victim on Thursday, the victim said his hand was still in a lot of pain and he would be going to Campus Health to get a bump on his head from the altercation checked out.

The victim said he was called "You N-word" about eight to 10 times during the duration of the incident. He told police he "freaks out when someone says the N-word. It's 2019 and it shouldn't be said especially from a white male."

He also said "the incident replays (in his head) every day, every second and it is frustrating. Every time he feels pain in his hand he is reminded of it."

In an emailed statement to the Tucson Weekly on Monday, Maryan Hassan wrote that collectively the Black Student Union feels that though the students were arrested there is more work to be done.

"UAPD and administration need to take responsibility for the ways that they handle incidents (hate crimes) that are obviously bias and racially motivated," she wrote. "UAPD, especially Brian Seastone, need to be held accountable for how they have decided to handle the situation. They need to look over their policies and make immediate changes that actually prioritize and protect the lives of black people on this institution that systematically set to serve and protect the lives of white students." ■