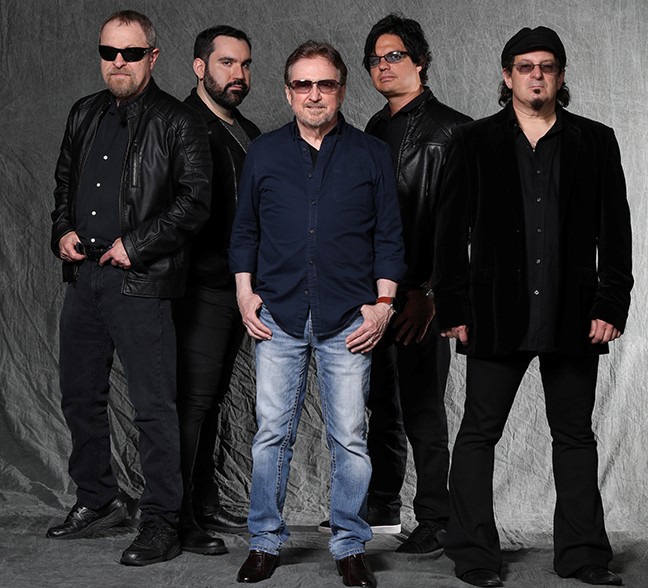 with Of Limbo
8 p.m., Friday, July 5
Rialto Theatre, 318 E. Congress St.
$34-$52
740-1000
Long island band the Blue Öyster Cult have a long and storied history, though one that is perhaps tempered by the fact that there are many people out there who only know the band because of their 1976 single "(Don't Fear) The Reaper" from the Agents of Fortune album released that same year.

That's honestly a bit of a waste, because this is a band with a ton of great music in its arsenal. Formed in 1967, BOC (as they are often known) already had three albums out prior to the release of "Reaper." As their first three full-lengthers had black and white art on the sleeves, fans have dubbed these the "black and white years."

Undeniably though, "(Don't Fear) The Reaper" is an excellent, era-defining song. Famously parodied with the "more cowbell" sketch on Saturday Night Live, the song has been covered on a number of occasions and has passed into the popular consciousness.

Albums that followed, such as 1977's Spectres and '79s Mirrors were equally excellent, spawning crowd favorites such as the monstrous "Godzilla." In fact, the band was super-prolific right up to Imaginos album in '88, and then they kind of fell away. Band members came and went, and it took a full decade before they returned to the studio for the Heaven Forbid album.

Three years after that, they released the poorly-received Curse of the Hidden Mirror, an album that saw them dropped from the Sanctuary label. Since then, they've pretty much been a touring band. BOC is always on the road, though frontman Eric Bloom says they're preparing new material for release now.

"Yes, we're working on new material—actually this week," Bloom says, on the phone while, unsurprisingly, on tour. "We will be hopefully delivering a new album spring of next year. Spring or summer, I'm not really sure. It's up to the label."

It's no secret that the music business has changed beyond recognition in the past decade, never mind in the 50 years since the band formed. People no longer want to pay for recorded music, so for a legacy band such as BOC it's simply easier and more lucrative to keep performing live rather than getting in the studio to record.

The core of the current lineup is Bloom, and guitarist Buck Dharma, both of whom have been with the band since the swingin' sixties. The other three—bassist Danny Miranda, drummer Jules Radino and keyboardist/guitarist Richie Castellano—joined between '95 and 2004, but the band has stayed pretty solid since then. Still, Bloom and Buck are doing the majority of the songwriting.

"We've had a long time between albums obviously," Bloom says. "But we do tour incessantly, and Buck and I are writing. He's writing solo, I'm writing solo, we're writing together, we're all reaching out to acquaintances who might want to write with us. We do have Richie Castellano who is writing stuff in our vein. He's written other kinds of material in the past. And there's plenty of input. We've just got to get down to work."

Bloom says that there are no hard or fast rules to the way he and Buck write. Sometimes it's together, sometimes apart.

"Back in the early days, going back 40 or 50 years, we had a band house with the five original guys, and the music evolved," he says. "Then the next step, into the mid to late '70s, everyone wrote individually and then thrashed it out together. The later years, it's more individual writing but for the last two records, Buck and I literally got together in each others' houses and wrote a lot of it together. Very often you get inspired sitting on a plane, or whatever. You never know when you'll get inspired for a song."

The problem Blue Öyster Cult, and classic rock bands like them, face is that everybody wants to hear the hits. Fewer want to get up and cheer for new material. This must be frustrating, though it's tempered by the fact that there are many bands out there who cite BOC as a major influence.

"I listen to all kinds of stuff," Bloom says. "I listen to XM radio. I don't really have my finger on the pulse of what's popular because that doesn't really relate to what Blue Öyster Cult does. But we're aware of what's going on. I wouldn't say you're going to hear any pop music coming out of us soon."

Bloom is modest enough to stop short of listing the band he feels he influenced, and humble enough to be grateful to the bands that covered his music.

"I'm glad that every couple of years Metallica covers one of our songs, which is really nice of them," he says. "Our songs do get covered here and there by other people. We go back a long way, and a lot of our material—what we did, the way we played—I guess influenced a lot of younger people who were with us back then or influenced younger people who are playing now. But a lot of pop music today isn't really guitar-driven. I think that's one of the reasons why a lot of people still come to see us play live."

That's something we're going to get to do when the Blue Oyster Cult gets to Tucson this week. Bloom is glad to be here for the first time in a while.

"We play every place, but we don't come to Arizona that often so were sort of looking forward to that," he says. "We'll play a mixture of everything from the first to the last album. All the obvious suspects plus a mixture of some deep tracks if people want to hear them. I'll change the set in the middle of the show if I feel like it."

We ask Bloom what the band has planned after this tour, and he points out that the Blue Oyster Cult is never off tour. If they record new material, it'll be on the few days off between gigs. But they're always working.

Season of the Hitch