Tucson Roadrunners off to strongest start in franchise history 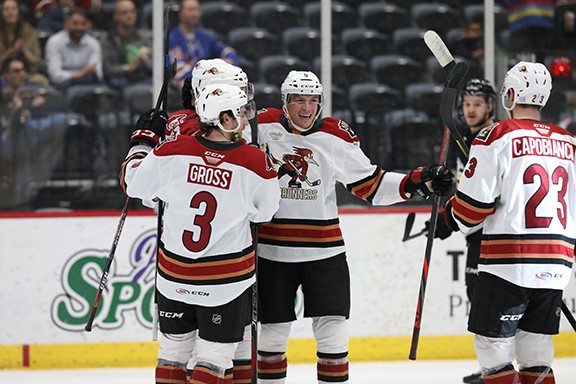 Courtesy photo
The Tucson Roadrunners beat the Colorado Eagles, 6-3.
An announced crowd of 4,285 patrons rose to their feet in unison to serenade the American Hockey League's hottest team after its latest home conquest on Tuesday, Dec. 3.

The fans that flocked to downtown's Tucson Arena saw the hometown Roadrunners race out to a 2-0 lead on their rivals, the Colorado Eagles.

They then saw a harrowing second period that included three goals in three minutes of game action, with the Eagles scoring two of those to draw within one of the home side.

The Roadrunners put any anxiety on ice in the final period, when Hudson Fasching and Kyle Capobianco scored to secure a 6-3 victory.

The win moved the Roadrunners' yearlong record to 16-5, with the Old Pueblo's hockey team sitting atop the AHL's Pacific Division.

Second-year coach Jay Varady was effusive in his postgame remarks, heaping praise on his players for finishing the job on Tuesday, while also cautioning against complacency.

Varady's side has accomplished a lot in the season's first few months, outscoring opponents, 82-59 this year as of Tuesday's game, while maintaining a three-point lead over second-place Stockton in the Pacific Division.

Fasching believes the team is heading in the right direction, a year after missing out on the AHL playoffs by a single point.

The key to the team's turnaround, according to Fasching, is their ability to keep fighting when the going gets tough and to stay together when adversity strikes.

"I think we're just battling hard right now," Fasching said. "I think that in games where we're successful, it's just all about our battle level, winning pucks in front of the net and making sure we're clearing pucks out. I think that's our biggest thing."

The Roadrunners' early season success has been sparked by an offense that includes sharp-shooting Lane Pederson, who leads the team with 13 goals in 21 games.

Two other players have at least 20 points to their name this season, with Brayden Burke (21) and Michael Bunting (20) adding needed mettle to the team's offensive attack.

The other major boon for Varady's team has been the goaltending duo of Ivan Prosvetov and Adin Hill.

Prosvetov was in net for Tuesday's victory, turning away 46 of Colorado's 49 shots on goal, allowing the Roadrunners to handle a talented Eagles squad.

The 20-year-old Russian goaltender praised the coaching staff in Tucson for unlocking his upmost potential.

A glance at the year's stat sheet supports Prosvetov's assessment, as his 2.31 goals against average and 230 saves this season are amongst the best in the 31-team AHL.

"I think we're a really good group of players and we have a good coaching staff," Prosvetov said. "These guys behind the scenes, our defensive coaches, they work hard, they watch a lot of video on the plane. I think it's our strong side, because we all work hard and all work together."

Varady attributed much of the team's success this season to their ability to stay resilient when things get tough, with Tuesday's victory being the latest example of such a trait.

"I think the leadership in our dressing room is huge for us," Varady said. "Those guys do a big part for us throughout the course of the season so far, and I think we have a lot of guys that have been through various situations that take control of the group when the time calls."

Fasching is confident the home side will continue its hot streak over the next few months, thanks to the bond that's been built on the ice since the season started in late October.

Fasching believes the team's hot streak shows that they've adapted to the grind of the league's 72-game season, readying themselves for another playoff run come next spring.

"I think it speaks to the growth of our team a little bit," Fasching said. "Obviously, as the season goes on you hope you can learn, and I think that games like tonight are proof that we're learning. We're betting better, we're adapting and we're bouncing back and understanding the mindset we have to have to be successful."

Things to Do on Thanksgiving in Tucson