Borderlands Brewing and UA Scientists Team Up for Public Lectures 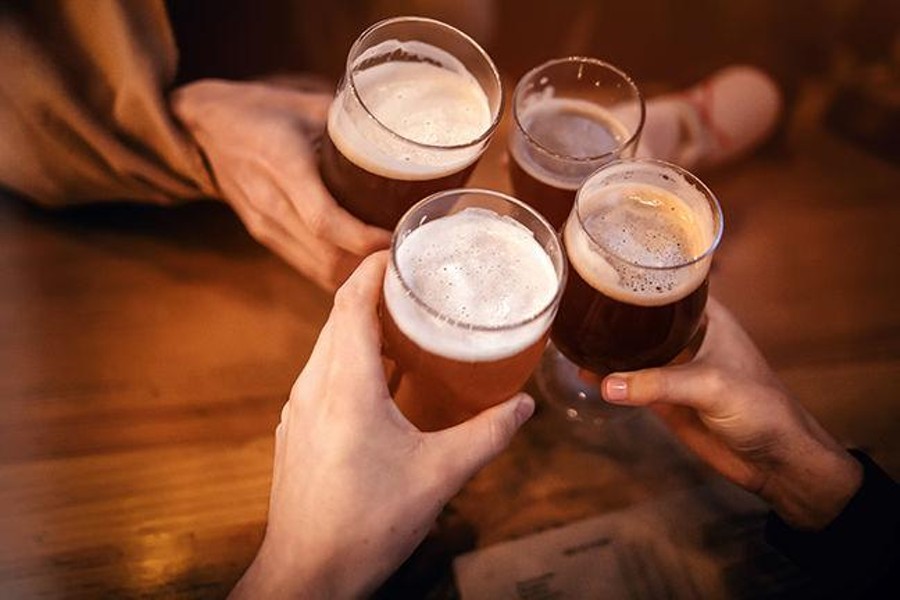 Bruce Bayly demonstrates a mathematical equation by blowing across the lip of a glass Coca-Cola bottle, only to be interrupted by a train rumbling the floor of Borderlands Brewing.

"They're cheating!" Bayly shouted, and once the train passed, blew harder across the bottle. Audience members young and old chuckle, and Bayly returned to explaining what many consider complex science about waves, amplitude and energy by using common household items.

Bayly is an associate professor of mathematics at the University of Arizona and has served in academia for over 30 years.

But the setting is far from academic at Brains and Brews, a weekly event where local scientists present to patrons at Borderlands Brewing.

"Now, these days we have advanced technology—like the turkey baster." Bayly said, filling the kitchen instrument with water.

Patrons applaud as he produced a melody by raising and lowering the water level as he blows across the opening. In addition to an interactive mini-seminar, attendees get to compete in a science trivia game immediately following, with a chance to win gift cards to Borderlands Brewing.

Brains and Brews began in June, 2018 as the result of a partnership between Borderlands Brewing Co. and March for Science Southern Arizona, a local branch of the national organization formed in response to the Trump administration's decisions regarding various environmental issues.

"Our mission is science advocacy—correcting common misconceptions and breaking down the ivory tower of academia," said Josh Hoskinson, CEO of March for Science Southern Arizona. "The disconnect between academia and the public has been what's fostered public distrust."

Hoskinson was inspired by a variety of community science and trivia events hosted around Tucson, like Geeks Who Drink, Astronomy on Tap and the UA's Science Café events.

"I thought it'd be fun to have a science talk paired with trivia," Hoskinson said. "It's fun, but it also creates a platform where we're all learning together here in the Southern Arizona community."

Bayly said public science events like Brains and Brews are important because they break down misconceptions.

"Science is not just about learning old ideas, lacking creativity. And art is not all about creativity," he said. "Art utilizes structure, requires practice – music people need to understand sound and vibration."

Pulling out a pink violin, Bayly describes all the ways the instrument makers apply scientific thinking to their craft. After an informational video clip, Bayly is on to another concept, interspersing humor between scientific concepts and intermittent train interruptions.

"We're putting an 'A' in STEM to turn up the steam!" he said, picking up a handful of springs and a donut-shaped weight.

Bayly asked the audience to use the stopwatch apps on their phones to measure how the length of a spring and the weight of an object attached to it would affect the number of oscillations within a given time.

DaNel Hogan, director of The STEMAZing Project for the Office of the Pima County School Superintendent and self-proclaimed nerd, said events like these are important for broadening people's perspectives of science, but also for finding community.

"This is where nerdy people go to find their tribe," Hogan said. "I get to meet other people who want to learn stuff and are from completely different backgrounds than mine."

Hogan said people should embrace the reality that there are many things they aren't even aware about, and to make an effort to become more scientifically literate.

"The more we learn about science, the more we think about things in terms of evidence versus relying on our own bias," he said.

Part two of the evening, the trivia, puts science talk into the hands of the bar-goers as teams of friends and strangers attempt to answer questions across a variety of topics.

The tempo is fast and the stakes are high – March for Sciences Southern Arizona's Chief Communications Officer Ansel Andrews hosts a fast-paced game, and one where each passing of a train prompts a "Train Question."

"You only have as much time to answer as it takes for the train to pass." Andrews told the crowd.

For those who want to begin boosting their science literacy but don't know where to start, Bayly said resources like observatories and museums are within reach here in Tucson and that institutions like the Children's Museum make it even more fun and accessible. Bayly also didn't fail to mention the unending science gold mine in the video universe of YouTube.

People of all ages are welcome to attend Brains and Brews for free, every Monday night starting 7 p.m. at Borderlands Brewing Co., located downtown at 119 E. Toole Ave.