This is a tricky one to write.

It is Christmas day, and I have dressed all in white to write it. It is my way of considering Anna's spirit, as joyous as it was.

Anna had been a dear friend these last seven years, and in that time I learned the true meaning of the word enchanté. I was fortunate not to be aware of her legend when we first met. By that I mean I could approach the person and not the legendary film star, writer and singer.

A mutual friend, David Brunetiere, had suggested we might work together to make some music. He shared the same management as Anna with the devoted Laurent Balandras.

I was instantly charmed upon introduction. Anna was in her early 70s then with the spirit of a sprite. Her eyes were large and kind and her smile was radiant. She was extremely present and spoke in an intoxicating husky voice.

Sparked, we set out on figuring out what music we might do together. The most obvious material to me was some Leonard Cohen. Her voice was now in a similar register as his, both lovely in a well-aged baritone, and if she would consider doing it in French, I bet it would surely get a wink outta Quebec Leonard if he heard it.

But that wouldn't happen. Anna didn't want to sing Cohen because his lyrics were not joyous enough for her. It took me a while to wrap my head around that, this woman who could transmit any emotion onscreen.

Her husband, Dennis Berry, is an American-born film director and a sincerely affable fellow. He'd found his way to Paris when the beats were discovering the Left Bank and the beboppers loved playing there, and he hung out with most of them.

The hotel he turned me onto was the same one they all stayed at in Paris; the infamous La Louisiane Hotel in St. Germain. Miles, Monk, Dexter Gordon, all of 'em, stayed there, which was just around the corner from where he and Anna were living. It was really much like the Hotel Congress because the rooms were (purposely) not upgraded. The whole place still has that old-timey charm, the same vintage rooms those jazzmen dreamt in. I'd check in and meet the couple at the Café Mondrian for a glass of wine and the stories would roll out.

I would always get a little dizzy listening to all of her great stories. Both of them had astounding recollections of the good old days. They were both charmingly old world. For example, I couldn't even email songs to Anna or Dennis. They had to be burnt on the kind of CD that would still play in a vintage CD player that Anna had. Getting music to her would take so much more time.

When she told me she was Danish, we connected on a whole other level. She recounted the story of coming to Paris as a teen and staying at a church until the moment she was "discovered" by a photographer who took her photos. She was smart from the start and instinctually savvy. Eventually one of those pics landed her a gig acting in a soap commercial, in which she insisted on wearing a bathing suit while in the suds. When film student Jean-Luc Godard saw her on TV, he wanted her for a part in Breathless, but nope. Anna would not get naked for the sake of the film. Godard never forgot about her and eventually made history filming her, and marrying her too. 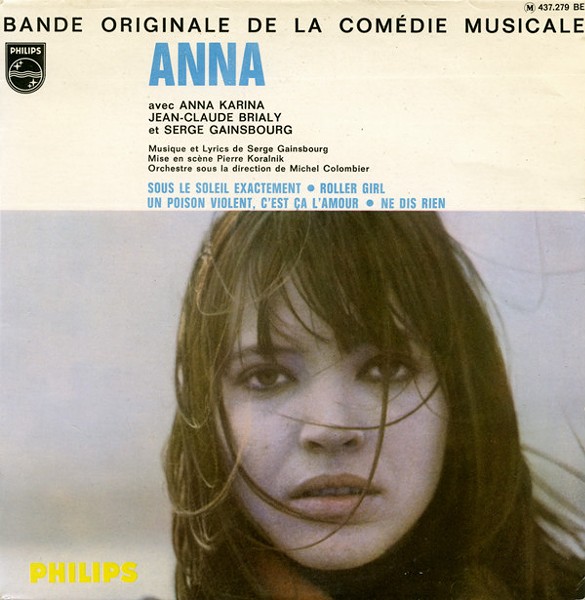 On one visit I had recently discovered the genius of Carl Th. Dreyer, the pioneering Danish filmmaker from the late '20s. He was mind-blowing for the time and timeless for this time too.

When I mentioned Dreyer over wine at Mondrian, Anna later brought me a book about him with photos of her as a child alongside her mom, who had worked doing wardrobe for him. It was impossible not to get dizzy whenever we'd hang.

Eventually we gathered to record. I had chosen something I wrote, a love song I thought had a timeless quality to its construction called "Not the End of the World." She requested I sing a duet in French on a tune her friend had written. Man, I did my best, but she was so very kind and had a lot of fun coaxing me along.

I was still certain she should cover Leonard Cohen. I hatched a plan to record one of his songs so she could hear what I was trying to have her be a part of. One day on tour in Spain, we got around to recording it in Cordoba with my friend Fernando Vacas. We had Thøger Lund on bass, Gabriel Sullivan on percussion, Brian Lopez on Spanish guitar along with flamenco gypsy Juan Panki on guitar too. Sometime later in the hood, M. Ward gave the vocals a shot and sung in a beautiful falsetto which would've worked exceedingly well with Anna's voice as a duet. I tidied the whole thing up with some non-organic strings and Sullivan edited and mixed it all together in Tucson. I produced it in a way to leave room for Anna to sing with Matt on the final mix.

The next time in Paris, I met up with Anna and she took the CD home with her that night. We met in the studio the following afternoon to work, but nope. "Howe," she said, "I can't sing Leonard Cohen. His lyrics are too dark. It's too dark, Howe." Yes, this woman was serious when it came to delivering joy in her art. Leonard was serious about something else. 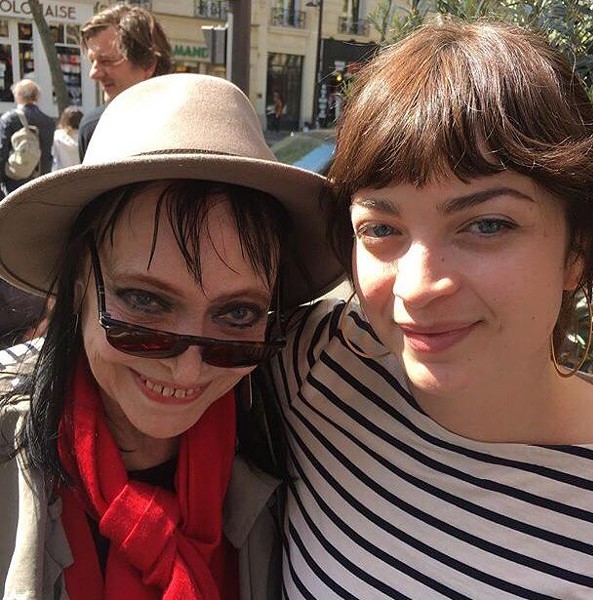 In the end, I would end up putting my own voice on that version of "A Thousand Kisses Deep," 'cause it was just too good to waste. But I had come to understand Anna, the magnificence of her spirit, which had been there since the get-go. It delivered her at a tender age to the bustle of Paris and made her who she became to the world.

Earlier this year when I was passing through Paris, I had gone to buy a blue suit. The shop happened to be across the street from the Café Mondrian. As I was leaving, I noticed the café all boarded up. Closed for good.

More recently, on this last and final tour of ours in Europe, I was to stop in Paris first and spend an afternoon filming Anna for a western film we are making here. She was to play a muse for a singing cowboy set in 1873. She would be shot in a scene instructing him how he could bring more joy out in his music, using waltz time as she swayed her scarf in beat.

But Anna's impending surgery was looming and it was decided to wait till spring to shoot. A sensible idea, but one tinged with sensible worry too. She had a mighty spirit, but her body was something more vulnerable and delicate.

The call came as I returned home. Anna was now in a coma. I went to bed that night dreaming of how to wake her up. Music had to be played in her room. I heard the song, something about the moon. "Fly Me to the Moon," I think. I awoke and feverishly instructed my friends overseas to try this, to stimulate her mind into waking up. To stroke her hand and whisper sternly in her ear to open her eyes. And she would, as it played out in my dreams. But maybe she opened her eyes to a brand-new world.

Out of the dream I went into the bathroom, worried and jetlagged, and accidentally poked myself in the eye with enough force to cause permanent damage.

The instant things changed; I thought of those eyes, that smile. How she moved and thought, that very Danish common-sense mixed with French panache, a grace. The joy she brought so many. The very things she thought were important in art and in life.

She will forever be remembered and eternally loved for how she made us all feel. This woman who showed us the bright joy that lives beside the dark pains and pokes of life.