A Matter of Conviction

In Arizona, humanitarian aid is sometimes a crime 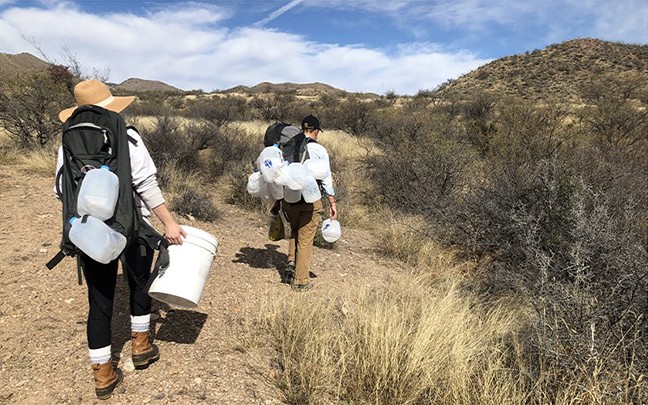 As the defendants await sentencing, they face a maximum penalty of six months in prison and a $250 fine each.

The legal battle the four volunteers fought this week surrounds an incident on Aug. 13, 2017, when they entered Cabeza Prieta without permits.

Hoffman, who drove the vehicle into the wildlife refuge, is charged with operating a vehicle in a wilderness area. All four of the volunteers are charged with entering the refuge without a permit and abandonment of property for the gallons of water and pallets of beans they left in the refuge.

No More Deaths has been leaving aid for crossing migrants along the U.S.-Mexico border for more than a decade. The group specifically leaves the supplies in Cabeza Prieta, which shares 56 miles of the border with Mexico.

In his verdict, Judge Velasco chastised No More Deaths for not properly warning the defendants of the legal repercussions they could face upon entering the refuge.

"No one in charge of No More Deaths ever informed them that their conduct could be prosecuted as a criminal offense nor did any of the defendants make any independent inquiry into the legality or consequences of their activities," Velasco wrote in his ruling.

In a press release Friday, No More Deaths stressed the significance of the verdict.

Tensions with legal authorities are nothing new for the group, but the last time a humanitarian aid volunteer along the border was found guilty was a decade ago.

Dan Millis was charged with littering for leaving gallons of water at the Buenos Aires National Wildlife refuge in 2008, which was overturned by the 9th Circuit Court of Appeals in 2010.

Four more No More Deaths volunteers are scheduled to begin their trials on Feb. 26.

Caitlin Deighan is charged with driving in a wilderness area. Deighan, Zoe Anderson, Logan Hollarsmith and Rebecca Grossman-Richeimer face charges of entering a national wildlife refuge without a permit.

Scott Warren, another volunteer with No More Deaths, is awaiting trial for charges involving harboring undocumented immigrants, which is considered a felony.

During events held in support of the four volunteers' legal defense last week, No More Deaths volunteer Justine Orlovsky-Schnitzler spoke to the possibility that they are found guilty.

"It's not over until it's gone all the way up, you can continue to appeal, and people are certainly prepared for that," Orlovsky-Schnitzler said.

Just a few days before the verdicts, amid a vibrant display of freshly painted signs across the street from the courthouse, Millis holds a tattered plastic sign that reads in bold letters, "Humanitarian aid is never a crime."

When Millis was convicted in 2008, the same slogan was used to support his legal defense. That conviction later was overturned.

On Tuesday, he stood in support of four other volunteers facing charges for their own humanitarian work.

"I feel like it's the same experience that I lived where you're going about your business, trying to help people as a good Samaritan, yet suddenly the government, out of nowhere, decides to prosecute you," Millis said.

Millis spoke with reporters outside the DeConcini Federal Court Building in Tucson, supporting four humanitarian aid workers whose trials began this week on misdemeanor charges brought against No More Deaths members in January 2018. 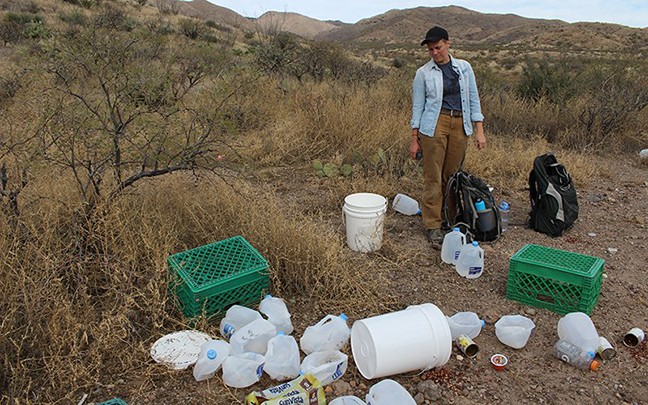 Natalie Hoffman is charged with driving in a wilderness area on Aug. 13, 2017. In addition, Hoffman, Oona Holcomb, Madeline Huse and Zaachila Orozco-McCormick are all facing charges of entering a wildlife refuge without a permit and abandonment of property.

The defendants face a maximum penalty of six months in prison and a $250 fine each.

Another volunteer, Scott Warren, is on trial for harboring undocumented immigrants, which is a felony. His trial is ongoing.

The potential outcome of these trials could have a serious impact on how humanitarian aid groups operate in Arizona's desert, leaving the decision in the hands of U.S. Magistrate Judge Bernardo Velasco.

Legal issues involving this case include the defense's claim that constitutional religious liberties protect No More Deaths volunteers' right to leave aid for those in need. The prosecution, however, asserts the defendants were knowingly in restricted land and broke federal law by entering it without proper permits.

The prosecution's first witness, U.S. Fish and Wildlife officer Michael West, testified that he responded to the area where the four volunteers were located in August 2017 and found gallons of water and pallets of beans near Charlie Bell Well, a restricted part of the wildlife range.

West claimed none of the volunteers had permits to enter to land, but the defense asserts this is because of a purposeful policy change rooted in animosity toward No More Death volunteers that has increased since President Donald Trump took office.

"Trump was elected in January, and four months later, we went in to get permits." No More Deaths volunteer Geena Jackson said. "They had added a new clause saying that by initialing here you are agreeing to not put food, water, blankets, socks, medical care out on the refuge."

The prosecution has declined to comment on the case, citing the need to avoid prejudicing jury selection, hearing or trial.

The defense has asserted that a desperate need for humanitarian aid along the border justifies the defendants' actions. They specifically cited a map put together by Humane Borders, another humanitarian aid group that operates near the border, and with the Pima County Medical Examiner's Office.

According to the map, the remains of 2,816 undocumented border-crossers have been discovered from 2000-17. Of these, 137 have been found in the rugged, unforgiving Cabeza Prieta refuge.

The defense says the humanitarian group is a faith-based organization and, therefore, each volunteer was acting on a religious mandate to help others.

John Fife, a retired pastor from Southside Presbyterian Church in Tucson, testified that he formed No More Deaths as a faith-based, humanitarian aid organization to provide water and medical care to those in need.

"We are all commanded to love with no exceptions," Fife said.

Judge Velasco asked Fife, "Does this faith exercise the right of martyrs?" Fife asserted that "One must make appropriate sacrifices to serve."

As no more deaths faces legal opposition, their efforts to provide aid in the borderlands have increased.

In light of the four defendants facing trial this week, the group organized canvassing and supply drop events on Saturday to raise awareness of the legal charges brought against them.

"Because it is a bench trial, because the judge has so much power, it just makes the canvassing and a show of public support feel that much more important," said Jackson, the No More Deaths volunteer. She notes there's a new risk involved as she continues to work with the aid group.

"We have to train our volunteers and say, 'By putting water out in the desert, you may be facing misdemeanor charges, are you prepared for that?'" Jackson said.

She initially thought the trials would cause a drop in No More Death's volunteer program as the risk for prosecution increases.

However, the opposite has occurred.

"More people than ever are saying they're ready to take charges if necessary. Because it's being criminalized, they feel even more empowered," Jackson said.

But as motivation behind their efforts continue, so do the tensions with legal authorities.

The question of who really uses the aid No More Deaths provides is not new.

"We don't know who's utilizing our aid, and we don't believe that anyone deserves to die in the desert," volunteer Justine Orlovsky-Schnitzler said. "Documented or undocumented, we don't know someone's circumstance, and it doesn't diminish someone's humanity."

While the weekend canvassing was taking place, four volunteer teams took trucks out on supply drops in the desert.

Jackson and Orlovsky-Schnitzler made up the team leaving water and beans at a supply drop in the Arivaca area. According to Jackson, this particular location is where migrants would be five to six days after crossing the U.S.-Mexico border.

However, the organization's efforts to provide water do not mean those who need it will receive it.

Jackson and Orlovsky-Schnitzler arrived at the supply drop to find the aid they left there two weeks ago destroyed. Every 1-gallon jug of water had been slashed open, and every can of SunVista beans dumped on the ground.

The volunteers, carrying a new round of supplies on their backs, began picking up the empty water jugs scattered throughout the site.

"It's always ironic when you come back from a day where were doing water drops and fighting littering charges, but we actually just cleaned up," Jackson said. "They made it litter."

Del Cueto said only a small percentage of Border Patrol agents engaged in such behavior and they do not accurately reflect the governmental agency as a whole.

Although it is unclear who is to blame for destroying aid left in the desert, the issue still persists.

"A few bad apples are not slashing thousands of gallons," Jackson said.

No more deaths is going to trial amidst the longest government shutdown in U.S. history. In order to reopen the government, Trump is requesting $5.7 billion for funding a wall along the U.S.-Mexico border. He also said the need for a barrier is clear through the ongoing "humanitarian crisis" at the border.

As No More Deaths volunteers work directly in the borderlands of Arizona, they do not question the validity of a humanitarian crisis at the border.

Opinions differ on why the border is a danger to human life, but for Del Cueto, the answer to the issue of illegal immigration itself is clear.

"Nobody's against immigration. We're against illegal immigration," Del Cueto said. "It's a simple process, that's why we have ports of entries and that's where people are supposed to present themselves to enter our country."

However, No More Deaths volunteers believe the current tensions surrounding the issue of border control are emboldening the administration to threaten the group's ability to provide aid to migrants.

"This work on the border has been going on for years and years, it didn't appear out of a vacuum when Trump was elected," Orlovsky-Schnitzler said. "With change in administration and policy, there's different approaches to administration. I think the time and place was maybe right for them to start ramping up their efforts to legally challenge what we do."

Despite the political backdrop the case is progressing in, there are still large questions looming about the legality of providing humanitarian aid along the border. No matter which way the verdict goes, No More Deaths members said they intend to keep fighting the criminalization of their actions.

"It's not over until it's gone all the way up. You can continue to appeal, and people are certainly prepared for that," Orlovsky-Schnitzler said. "Regardless of the outcome of trials, if the need is still there, we're not gonna go away."

Even through intense uncertainty, No More Deaths has one clear goal in sight.

"What we ultimately want is the ability to provide humanitarian aid, but then even further than that, making it unnecessary for humanitarian aid," Jackson said. "We want an end to the deaths and disappearances in the desert."