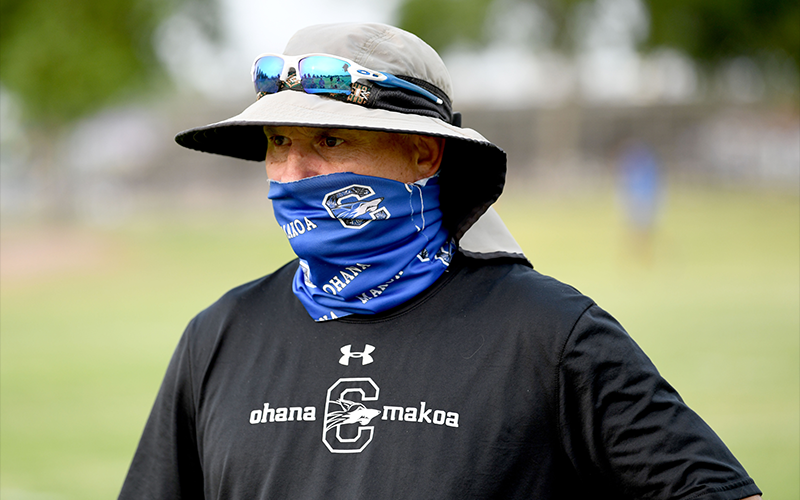 As usual, they are full of surprises, like they are most every year.

But this year, the rankings endured a different process because so many teams had to cancel games and shuffle their schedules to accommodate either their own or opponents’ COVID-19 outbreaks.

The undefeated Chandler Wolves are in the 6A top spot, followed by the 5-0 Hamilton Huskies and then, surprisingly, the 4-2 Liberty Lions. Undefeated Corona Del Sol and Mountain View round out the top five.

The Saguaro Sabercats, who are ranked No. 3 in the state by Maxpreps, clocked in at No. 6 in the 5A state rankings. The Sabercats have had numerous last-minute cancellations, but have been able to replace two of their canceled games and are on pace to move up in next week’s rankings. 5A newcomers Desert Edge and Salpointe Catholic, both undefeated, sit at the top of the conference rankings.

“Last year, 97% of the eligible 207 schools for postseason play completed a minimum five games prior to the first release of the rankings, with all schools playing at least four games,” said Seth Polansky, AIA sports information coordinator. “With the cancellations due to this unique year, only 73% of the eligible 145 schools for football postseason have completed a minimum of five games, with some schools only completing two to three games thus far. It is based on those statistics the AIA has decided to push the first release of the 11-man football rankings to Nov. 10.”

As it stands right now, the Open Division features 6A’s Chandler, Hamilton, and Liberty, 5A’s Desert Edge, Salpointe Catholic, Sunrise Mountain and Sunnyslope, and 4A’s Casa Grande. This would leave out 2019 Open Division No. 2 seed Centennial, No. 8 seed Chaparral and Saguaro, which was seeded third.

Assuming the pandemic doesn’t force AIA fall sports to shut down, there is still more football to be played, especially for the Chaparral Firebirds, who have only played three games thus far.

The Firebirds may have been one of the biggest victims of team COVID-19 outbreaks, as they canceled their first three games and now must play every game to be eligible for the playoffs. The Firebirds are 2-1 after a brutal 53-27 loss to Liberty Oct. 30, followed by a bounce-back 53-36 win against Casteel last Friday.

“(It’s) extremely difficult with people having different numbers of games that they played,” Firebirds coach Brett Barnes said on Nov. 2. “For us, quite frankly, if we don’t play better than we did (against Liberty), I don’t really care about the rankings (because) they won’t matter. But we’ve got bigger problems than worrying about rankings.”

Barnes anticipated surprises in this season’s initial rankings, especially given the circumstances of the pandemic.

“There always is, there always will be,” Barnes said. “I won’t be surprised if at the end, there’s going to be teams that in my opinion, are not the top teams that are out there, but because of their schedule they were given, they’re going to have a better record than teams that are clearly better than they are.

At the end of the season it’ll be very easy to point out those differences, but I know that it’s going to happen. I won’t be surprised by that, but there will be other people that (will be).”

The computerized rankings won’t have opinion factored in or any type of “eye test” like the College Football Playoff Selection Committee uses in its selection process. The absence of ranking teams by just watching them play definitely plays a part in people being surprised.

“It’s supposed to be computer ranking, so it’s not really an opinion,” Barnes said. “(Teams that) don’t have any losses ought to be at the top. If there’s a human element to it, then I’d say it’d be vastly different than what the computer will spit out.”

Barnes is not worried that the Firebirds’ canceled games might have factored into the decision.

“We’re worried about playing better,” Barnes said. “Those are things we can’t control. Bottom line is if you win enough games you get in the playoffs. That’s on us to find a way to win games.”

Rick Garretson, coach of the state’s No. 1 and nation’s No. 7 Chandler Wolves, thinks the top teams are easy to decide.

“For the top like 14, I don’t think it’s that difficult,” Garretson said on Nov. 2. “You (have) to look at strength of schedule and obviously success, but it just can’t be who’s undefeated. It doesn’t work that way.”

Like Barnes, Garretson expected surprises in the initial rankings, but believes the rest of the season should play itself out.

“I know last year, Saguaro wasn’t ranked at all on the first time when it came out, which set up (controversy) amongst everything,” Garretson said. “I think once it’s all said and done, it plays itself out, and it did last year. It was pretty much how it should have been set up. Chaparral won its way into the open (division), Horizon had a good season and lost their quarterback, (and) Pinnacle had a good season but then lost their quarterback too. All in all, it played its way out (and) I think it’ll be the same way this year.”

Garretson has a pretty good idea of the teams that, in his opinion, should have been atop the AZ Preps 365 rankings.

“There’s Hamilton, there’s Saguaro,” Garretson said. “Even though they got beat (on Friday against Queen Creek), there’s Highland (as well) because Brock Farrel is an excellent coach and his kids play really good football. Obviously, with the exception of Saguaro being a 5A school, those are all 6A schools. Liberty, they’ve lost to us and lost to Sunrise Mountain, who got beat last night, but they beat (Chaparral 53-27 on Friday). I think they’re up there as well.”

Garretson wasn’t sure about the 4A teams.

Both teams have since moved up to 5A.

“Strength of schedule has a lot to do with it,” Garretson added. “You have three regions (4A, 5A, 6A), which have (almost) all of the top teams. … Red Mountain was 9-1 last year, (and) it hurt them, being in the (6A East Valley) region. Their only loss was in 5OT to Perry last year. They went on to the 6A finals, while Chaparral beat Liberty (on the) last play of the game, and it put Chaparral in as the No. 8 seed in the open division and they opened up with us, and Liberty went on to win the 6A (state title).”

Garretson knows that cancellations can hurt a team’s rankings, but he also knows his team and other teams can’t worry about things they can’t control.

“There’s no question that (cancellations) play a part of it,” Garretson said. “With the guidelines, you just never know. We always tell our kids to enjoy what you have at the moment because you never know if that’s going to continue (and) there’s things that are totally out of your control.”