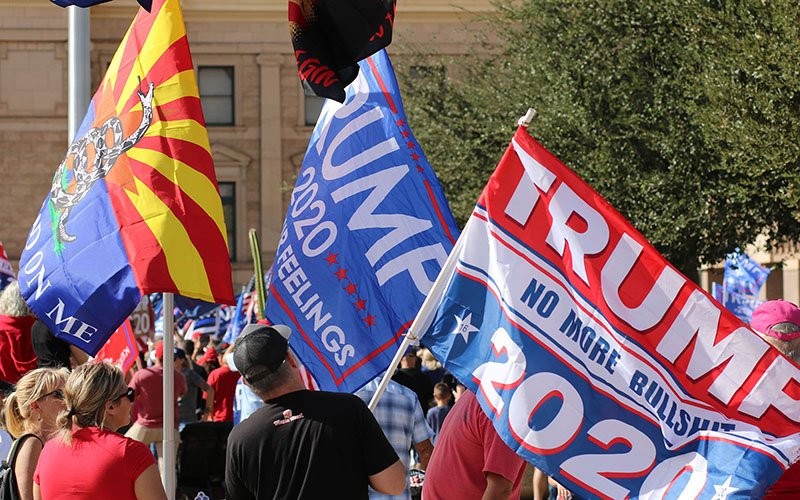 WASHINGTON – The Trump campaign added Arizona this weekend to the list of states where it has gone to court to challenge the ballot count, charging that Maricopa County rejected ballots that should have been given a second review.

The suit, filed Saturday in Maricopa County Superior Court, claims that those rejected ballots would “yield up to thousands of additional votes for President Trump and other Republican candidates” if they were counted.

It was filed the same day that prominent media organizations said Democrat Joe Biden appeared to have won in enough states to secure the 270 Electoral College votes needed to win the presidency, leading Biden to assume the mantle of president-elect.

Arizona has already been called a win for Biden, but Trump has increasingly chipped away at his lead since Election Day. As of Monday afternoon, the two men were separated by just 15,432 votes, with 71,497 votes still to be counted, according to the secretary of state’s office.

“This election is far from over. The American people are entitled to an honest election: that means counting all legal ballots, and not counting any illegal ballot,” said Arizona Republican Party Chairwoman Kelli Ward in a prepared statement. “We will not rest until the American people have the honest vote count they deserve and that our nation demands.”

The lawsuit was filed by the Trump campaign, the state party and the Republican National Committee against Arizona Secretary of State Katie Hobbs, Maricopa County Recorder Adrian Fontes and members of the Maricopa County Board of Supervisors.

The suit claims that when ballots with ink bleeds, splotches or stray marks were fed into tabulation machines, they were flagged by the machine as containing “one or more overvotes or other apparent defects.”

Such ballots are supposed to be set aside for review by a panel of election judges, but the suit says poll workers instructed voters to push a green button – or pushed the button themselves – to override the error message. Doing so, however, did not set the ballot aside, but invalidated the entire ballot, the suit claims.

Fontes’ office did not respond to a request for comment on the suit. A spokesperson for Hobbs said the office would respond in court, but that response had not been filed as of Monday afternoon. But the Hobbs’ aide also called the latest suit a “seemingly repackaged” version of challenges last week to the use of Sharpie markers to make ballot selections.

Social media reports Wednesday claimed that the Sharpie pens distributed by Maricopa County poll workers led to ballots being disqualified – reports that were swiftly shot down by election officials as baseless.

They blamed the confusion on voters who asked for early ballots but then showed up on Election Day. They would have seen that their mail-in ballot was canceled, but the in-person ballot would count – whether a Sharpie or other pen was used, they said. Sharpies were used because their ink dries quickly, officials said.

“Sharpie markers were available at each Vote Center through the early voting period and Election Day by recommendation of the tabulation equipment manufacturer,” Fontes tweeted Wednesday. “It’s the preferred and stress-tested method to mark a ballot.”

The latest suit appears to fall in line with a White House strategy, with Trump saying on election night that he would be “going to the U.S. Supreme Court” to challenge the validity of votes cast across the nation. In remarks to reporters just days before the election, he said that “as soon as the election is over – we’re going in with our lawyers.”

Since Wednesday, the Trump campaign has filed lawsuits in Pennsylvania, Nevada, Michigan, Georgia and Arizona – all perceived battleground states that have been called for Biden or are leaning toward the Democrat – to challenge vote counting and allege voter fraud.

Former Arizona Attorney General Grant Woods said last week that in his eight years in office, there was never an instance of voter fraud in the state, calling Trump’s recent statements “unacceptable.”

“It’s pretty clear that the president of the United States, for some time now, has been sowing these seeds of doubt so that if he loses he can try to claim that it was because of fraud, not because he didn’t get enough votes,” Woods said last week before the election.

Trump’s message appears to have been heard by the protesters who have shown up at the Maricopa County Tabulation and Election Center or the State Capitol regularly since Election Day. They challenge projections of a Democratic win and demand that officials continue counting votes – in contrast to other states where Trump supporters have demanded an end to the count.

“The president, just like any other candidate, has the right to all available legal challenges and remedies, and we are confident they will be properly adjudicated. We will respect the election results,” Ducey said in a statement.

Woods said Arizona election officials will continue to their jobs, regardless of what anyone claims.

“What elections’ officials in Arizona and across the country are committed to is that every vote is going to be counted,” he said.