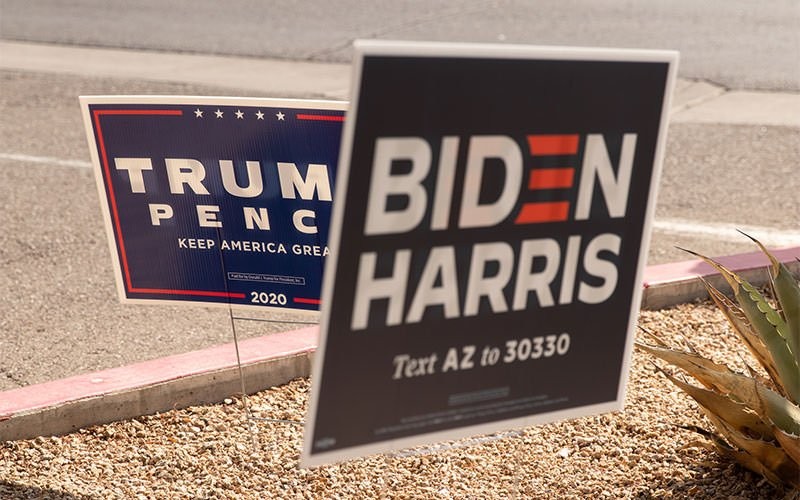 As Americans watch election results continue to trickle in, voters have taken to social media to share their confusion and anxiety, and have often been met with lies and misinformation.

The heightened spread of disinformation over social media can have negative consequences on America’s democracy, according to Scott Ruston, a research scientist with Arizona State University’s Knowledge Enterprise.

“In many ways, the fundamental underpinnings of democratic society are at risk because they depend so much on willing, informed citizen participation and expression of political will,” Ruston said in a Q&A from ASU. “If the basis of those decisions made by the citizens is corrupted by disinformation, then that’s a hijacking of domestic society.”

Disinformation is when a person intentionally spreads information they know is false or misleading.

Between March and September, more than 120,000 pieces of content were removed from Facebook and Instagram for violating voter interference policies, and an additional 150 million pieces of content on Facebook were labeled as false information, according to Guy Rosen, VP of Integrity for the social platforms, in an explanation piece for Facebook.

Here is some of the recent misinformation that has been circulating on social media.

As Arizona landed in the spotlight among the last few states to declare a winner in the presidential race, false claims and multiple fake accounts cropped up on Twitter.

The accounts commonly replicate the name and style of The Associated Press, the oldest and largest American news organization, and a standard-bearer in accurate election calls. The AP has called races nationwide on its Twitter account dedicated to politics.

AP is one of the few news outlets to have called the state of Arizona in favor of former Vice President Joe Biden.

Confusion over use of Sharpies to fill out ballots

In Arizona’s Maricopa County, a Facebook post gained traction after claiming that poll workers were providing voters with Sharpies to purposefully invalidate ballots.

Thursday evening, Arizona Attorney General Mark Brnovich announced on Twitter that his office was “confident that the use of Sharpie markers did not result in disenfranchisement for Arizona voters.”

Megan Gilbertson, communications officer for Maricopa County Elections Department, told Cronkite News that Sharpies are used for their fast-drying ink because when a voter “is marking the ballot, we need to make sure that when they put it through that precinct-based tabulator that the ink does not smudge.”

Gilbertson added that the ballots are formatted with offset columns, so if the ink from the Sharpie bleeds through “it would not impact tabulations.”

Following the confusion and misinformation regarding the use of Sharpies on ballots, protesters gathered outside the Maricopa County Elections Department.

Rep. Paul Gosar, R-Prescott, has joined protesters since Wednesday and spread false claims on Twitter about the ballot counting, going as far to tweet “any claim Biden has won is illegitimate,” and that “we cannot accept the theft of the presidency.”

The Maricopa County Elections Department responded to the protests on Twitter Thursday, saying “the eyes of the nation are on Maricopa County,” and it is important to balance the protesters’ First Amendment rights with the safety of the election workers.

Friday, conspiracy theories began spreading among protesters that ballots were being brought into the election center in Maricopa County. These claims are false, and the boxes being carried at the election center contained camera equipment used by media stations, according to reporters on the scene.

There has been no evidence of voter fraud or widespread issues with ballots in Arizona.

Numerous tweets from President Donald Trump have been flagged on Twitter as being “misleading about an election or other civic process.” Trump’s false claims include that he has “easily” won the election, that there has been widespread fraud in the states called for Biden and that ballots are still coming in after Election Day.

Trump has not won the election, as the national race has not been called. Additionally, there have been no credible reports of widespread or systemic voter fraud, and while votes are still being counted, a Maricopa County statement said this is because “an accurate vote takes time” and does not mean the ballots were cast after Election Day.

Maricopa County and the state of Arizona provides resources for those with questions about their ballot status or how ballots are counted.

Arizona voters who cast their ballot early or cast a provisional ballot can check the status of their ballot online. Ballots cast by voters on Election Day are all counted and therefore not tracked.