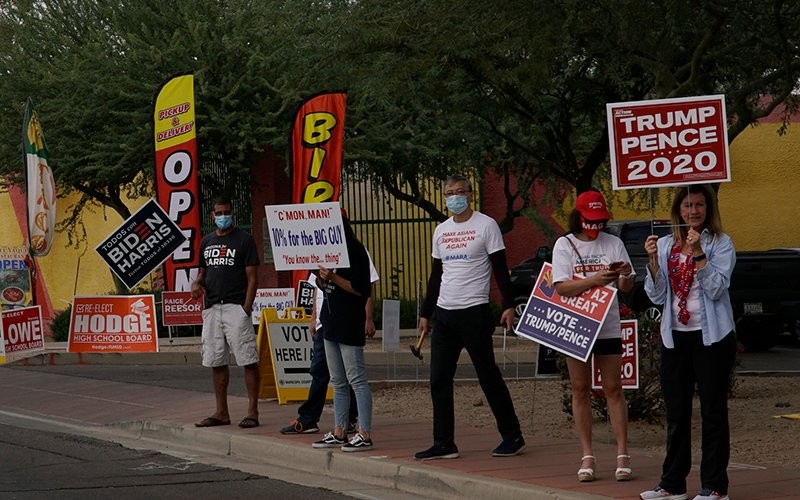 “We have been working on this for the whole year. And we have had other elections during this pandemic, so I think we’re ready,” said Erika Flores, deputy director of communications for Maricopa County Elections Department.

Flores said the county has “backups to our backup plans and have all of these procedures in place so that we can feel ready for Election Day.”

An Election Day that is overshadowed by the COVID-19 pandemic, marked by allegations of potential voter fraud leveled by no less than the president and tainted by fears of voter intimidation or post-election violence.

All the products of what Flores said “has been a very exciting election.”

That has already resulted in a record-high number of mail-in and early ballots in Arizona. The secretary of state’s office reported that elections officials had processed more than 2.6 million early ballots Monday – as many as were cast in the state in all of 2016.

Jon Greenbaum, chief counsel for the Lawyers Committee for Civil Rights Under Law, said the amount of early voting has helped keep voters safe during the COVID-19 pandemic by reducing the need for in-person voting.

Election officials and advocates agree that “things would have been a lot worse if COVID had come in the fall instead of the spring.”

“Now, one thing that has helped is that pretty much everybody’s had experience with elections since COVID hit,” Greenbaum said. “They’ve been able to adjust a lot because they’ve already experienced elections with COVID-19 during the spring and summer.”

In-person voting in Maricopa County has been held in larger locations such as the Phoenix Convention Center, which makes it easier for officials to observe Centers for Disease Control and Prevention guidelines for social distancing, sanitizing stations and other preventive measures. Flores also said the larger centers have helped keep lines manageable.

“We haven’t had any issues with wait times – the lines have been moving pretty quickly,” Flores said. “And that is partly due to the locations being so large. We were able to add check-in stations.”

Besides introducing drive-through drop-off boxes to give voters more alternatives, Flores says Maricopa County officials have been working hard to make sure voters “can feel as safe as possible” when casting their votes on Tuesday.

“We have safety measures in place at all of our vote centers,” she said. “We have poll workers wearing face shields, masks and gloves as well as offering masks and gloves to people as they come in, just in case they forget their mask at home. We’re also disinfecting the booths throughout the day.”

The state directed $9 million in federal coronavirus relief funds this summer to voting safety efforts, including the purchase of hand sanitizer, disinfectant, 179,000 facemasks, 175,000 pairs of gloves and 10,000 face shields.

But Greenbaum thinks counties could do more, such as requiring masks for voters as well as poll workers.

“There’s a significant safety concern that people have, especially in places in which both masked, unmasked voters are allowed to vote,” he said. “That makes everybody who’s fearful of COVID even feel more uncomfortable voting at the polls.”

Scott Nathan, the Arizona director for the Voter Protection Corps, thinks the high number of mail-in ballots this year is at least partly a response to the pandemic.

“I think it’s fair to say that’s occurring out of concern about going to the polls in person on Election Day and experiencing overcrowded polls and people who are not wearing protective equipment and so on,” Nathan said.

Fears of voter intimidation at the polls have not panned out so far.

Nathan said his organization has heard “about people sporadically going to specific polling locations and waving flags and occasionally talking to voters … at least as far as I’m aware in early voting, we have not yet seen incidents involving guns.”

He said advocates worked with the Pima County Recorder’s Office to “avoid the use of either on-duty or off-duty police or sheriff’s deputies” after Tucson officials received complaints that some voters felt intimidated by the presence of uniformed officers.

“Overall, there have been some isolated incidents here and there, but I think one of the things that have been a pleasant surprise so far is it hasn’t been worse in terms of efforts to intimidate voters than in previous elections,” Greenbaum said.

His organization will run a voter protection hotline Tuesday to help voters who have problems at the polls.

“We’ve actually put together a more robust effort than ever, in terms of being prepared for Election Day,” Greenbaum said. “Not just the hotline, but being prepared with potential litigation. The most common issues tend to be problems with polling places being open, and seeking on places they open later.”