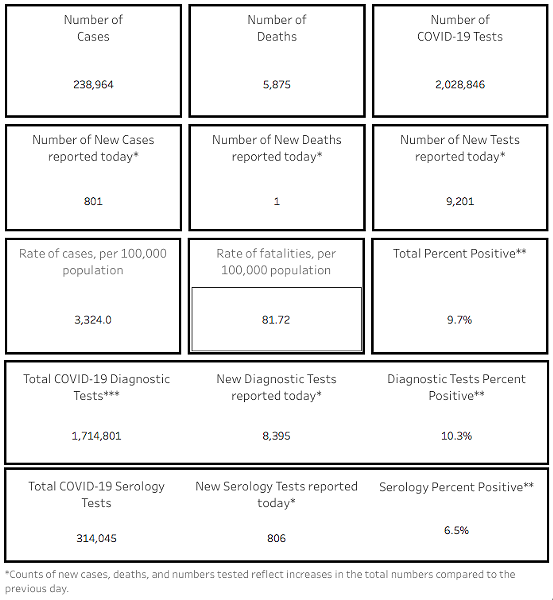 With 801 new cases reported today, the number of Arizona’s confirmed novel coronavirus cases closed in on 239,000 as of Monday, Oct. 26, according to the Arizona Department of Health Services.

In a worrisome trend, the number of cases statewide has climbed by nearly more than 7,000 in the week since Monday, Oct. 19.

With one new death reported yesterday, a total of 5,875 Arizonans had died after contracting COVID-19, including 636 deaths in Pima County, according to the Oct. 26 report.

Although President Donald Trump said the “big spike” in Arizona cases was now “gone” during last week’s final presidential debate, Arizona Department of Health Director Cara Christ noted on her blog last week that cases in the state were on the increase.

Christ wrote that while Arizona has not seen as big a surge as other states, “we have recently seen a shift of COVID-19 spread in the wrong direction.”

Christ noted that the statewide positivity results from tests has climbed from 3.9 percent to 5.5 percent in recent weeks.


Christ urged Arizonans to wear masks but noted the numbers across the state still indicated “moderate” spread of the coronavirus and hospitals are not reporting a surge of patients.

On a week-by-week basis in Pima County, the number of positive COVID tests peaked the week ending July 4 with 2,452 cases, according to an Oct. 21 report from the Pima County Health Department.

The newest is a downtown testing center 88 E. Broadway Blvd., on the southwest corner of Broadway and Sixth Ave. Testing will run from 10 a.m. to 2 p.m. every Monday, Wednesday and Friday. Testing is available without an appointment, or by appointment at pima.gov/covid19testing.

Schedule an appointment at pima.gov/covid19testing.

The centers are also tied into Pima County’s developing contact tracing operation, which aims to be able to identify potential clusters and warn people if they have been in contact with someone who is COVID-positive.

The University of Arizona’s antibody testing has been opened to all Arizonans as the state attempts to get a handle on how many people have been exposed to COVID-19 but were asymptomatic or otherwise did not get a test while they were ill.