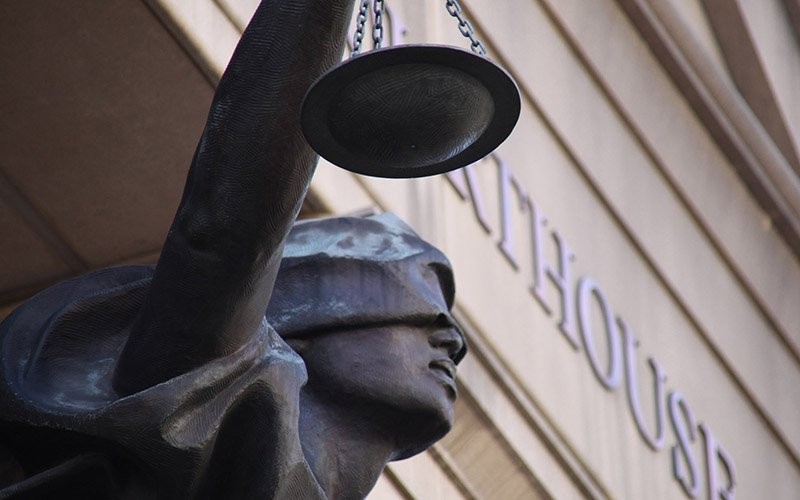 WASHINGTON – The road to the ballot box in Arizona apparently runs through the 9th U.S. Circuit Court of Appeals, which heard two cases in just the past two days concerning ballots and voter registration in the state.

Late Tuesday night, the court ruled in one of those cases, reversing a lower court order that had extended the state’s voter registration from Oct. 5 to Oct. 23.

The appeals court, balancing the burden the registration extension put on state elections officials against the harm that reversing the order outright would have on people who registered after Oct. 5, said the extended registration would end Thursday. That ruling came just a day after Monday argument’s in the case.

The court has yet to issue a decision in the second case, argued Tuesday, in which a group of Navajo voters argued that mail-in ballots coming from the Navajo Nation should have more time to arrive and be counted.

The arguments come with just three weeks to Election Day – and with more cases from Arizona pending, it could leave what an attorney in one case this week called “a sort of rough justice, but that is, unfortunately, the situation that we’re in.”

Timing appeared to be on the mind of the circuit judges as well, with one admonishing plaintiffs in the voter registration case for waiting until the last minute to file their case.

“You really put pressure on this situation by not coming in until Sept. 30,” Judge Marsha Berzon told activist groups in the case heard Monday, Mi Familia Vota v. Hobbs.

But Matthew Brinkerhoff, an attorney representing Mi Familia Vota, said his clients brought the suit as soon as they had enough data to convince the court an extension of the voter registration was needed.

In that case, Mi Familia Vota and Arizona Coalition for Change sued to extend the voter registration deadline, arguing that restrictions that were put in place in March to curb the spread of COVID-19 cut into their ability to register new voters.

Hobbs initially said that she would not try to block Logan’s ruling, tweeting that with the election so close, “Arizonans deserve a quick resolution to this matter. Providing clarity is more important than pursuing litigation.”

But she ended up filing an appeal over the weekend, saying that Logan’s order had “still caused significant uncertainty and that ongoing uncertainty, coupled with the disruption to election administration” called for a challenge.

Before a three-judge panel of the circuit court on late Monday, judges pressed attorneys for both sides on what would happen to those voters who had registered in the past week if they overturned Logan’s order.

Voting rights groups had rushed to register new voters after Logan ordered the extension. The judges Monday asked whether those recent registrations would still stand if they reversed and if they should allow a grace period or end registration immediately.

“Those who have registered by the time the stay takes effect should be allowed to vote in this general election,” said Drew Ensign, the attorney representing Hobbs, in Monday night’s hearing. “That is a sort of rough justice, but that is, unfortunately, the situation that we’re in.”

The court told the parties Monday to work on a settlement, and Hobbs and the plaintiffs agreed to a deal Tuesday afternoon that would have ended registration at 11:59 p.m. Friday. But that date was not agreed to by the Republican National Committee, another party to the suit, at which point the court stepped in and issued its order.

“As the Secretary recognizes, citizens who have begun the process of registering to vote but have not yet completed their registration have every reason to be relying on the district court’s extension of the registration deadline,” the court wrote, explaining its decision to give the extension until Thursday.

In a sharply worded concurring opinion, Judge Jay Bybee said the extension should have been ended immediately, saying the district court had “thrust itself into the election by altering the eligibility requirements for voting in Arizona” on a “thin complaint and record.”

People who registered after Oct. 5 “are not eligible to vote in this election, and adding thousands of ineligible voters to the rolls compromises Arizona’s election. I would require the Secretary of State to enforce Arizona law,” Bybee wrote.

That ruling came hours after a separate panel on Tuesday heard an appeal by six Navajo voters after a lower court rejected their request that mail-in ballots sent from the reservation postmarked by Election Day should be counted even if they arrive up to 10 days after Election Day. The current law says ballots must be received by 7 p.m. on Election Day to count.

The Navajos claim that significantly slower postal service and limited access to mail services on the reservation creates an extra barrier to voting, in violation of the Voting Rights Act of 1965. Research by Four Directions Native Vote said issues with the mail gave voters on the Navajo Nation up to 10 fewer days to consider, cast and return their ballots, compared to voters living in Scottsdale.

U.S. District Judge G. Murray Snow rejected the claim, ruling Sept. 25 that the plaintiffs failed to show that “because of the Receipt Deadline, Navajo voters are unable to cast a vote because of intimidation or lack of free will” or that “the Defendant selectively enforces the Receipt Deadline.” The Navajo voters “fall far below the showing of discriminatory intent required,” Snow wrote.

In his appeal to the circuit court, Steven Sandven, an attorney representing the Navajo voters, said Snow applied too strict a standard for his clients. He also wrote that other circuits have been “extending the receipt deadline for Vote By Mail Ballots based on the COVID-19 pandemic alone.”

But the circuit court judges grilled Sandven on whether an extension would even fix the problem Native voters face and whether it would be possible to change the procedures for Navajo Nation voters only.

Hobbs’ attorney, Roopali Desai, said there would be no way for election officials to tell which ballots had been cast by Navajo voters, because not all voters living on the Navajo Nation are tribal members.

Desai also cited the Purcell Doctrine – named for former Maricopa County Recorder Helen Purcell – which says courts should not make changes so close to Election Day because they can create confusion for voters and significant administrative burdens for election officials.

The cases come despite the fact that Arizonans have already started voting. And Arizona is not unique – more than 300 voting cases have been filed in courts around the country in recent months, claiming that questions of health and safety during the global COVID-19 pandemic have complicated voting this year.