Biden, Harris get on the bus to small businesses in Arizona 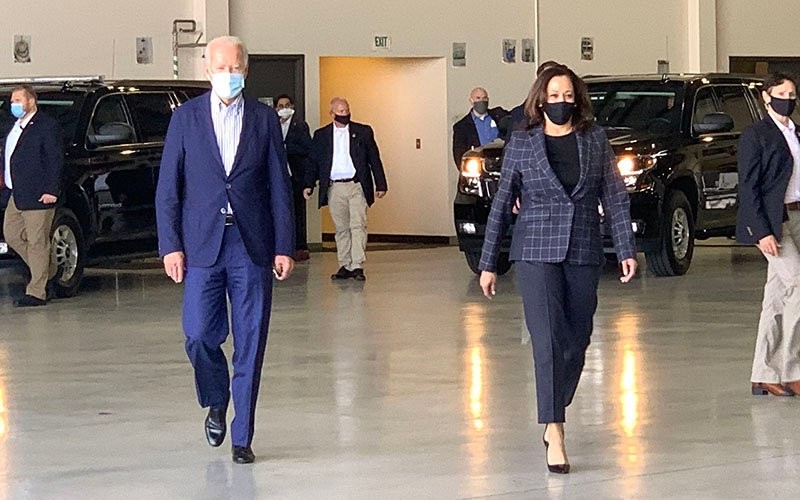 Their bus tour, which began in Flagstaff, included an outdoor stop at Barrio Cafe, a central Phoenix staple known nationally for its Mexican cuisine.

Small business owners, particularly in Phoenix, are “busting their necks,” Biden said – and that didn’t have to happen.

“Too many Arizonans are facing hard times right now,” Biden earlier told supporters at a labor union hall in west Phoenix. “They’re trying their best, but it never feels like it’s enough. You’re not looking out for a handout, you’re just looking for a fair shot.”

The Biden-Harris visit comes as polls show him ahead in Arizona; if they win, it would be the first time Arizona voted Democratic since Bill Clinton’s reelection in 1996.

Biden and Trump are competing for the business vote, with Trump saying his administration has helped small businesses with pandemic relief funds and Biden saying the federal government has failed to support small businesses, which are considered the backbone of the U.S. economy.

In Arizona, more than 1.3 million people are receiving unemployment, with the self-employed making up the majority of the claims as of Sept. 19, according to the Arizona Department of Economic Security.

Biden and Harris also reached out to Native American leaders and discussed issues of social justice.

Thursday morning, they stopped by the American Indian Veterans National Memorial at the Heard Museum to “pay tribute to the Native Americans who have served our country in uniform,” as Harris described it.

Cindy McCain, who has endorsed Biden for president, joined the candidates at the memorial. Harris’ mention of her presence was strategic – her husband, the late Republican Sen. John McCain, was a target of Trump’s ire before and after Trump’s election in 2016.

The Biden-Harris visit came the same day Vice President Mike Pence visited Peoria – and a day after early voting began in Arizona and hours after Pence and Harris debated on national TV.

Harris, echoing her statements in Wednesday’s debate, said the Nov. 3 election weighs heavier than any before it.

“Our nation is at a crossroads,” Harris said at the Carpenters Local Union 1912 hall in Phoenix, where she and Biden made most of their public remarks. “All at the same time, we are experiencing the pandemic, the recession, a reckoning on racial justice, a changing climate is battering our coastlines and setting the West on fire, and the future of health care hangs on top of it.”

Attendees were instructed to wear masks throughout, and they sat in folding chairs within socially distanced white circles. Sixteen people seated around the stage included officials with Biden’s Arizona campaign.

Their remarks hewed to familiar campaign lines, with condemnation for President Donald Trump’s persistent moves to repeal the Affordable Care Act, known as Obamacare, and attempts by the president and Republicans to confirm a replacement for Supreme Court Justice Ruth Bader Ginsburg before the Nov. 3 election.

“He is trying to ram through a Supreme Court justice who will do just that, who will strip protections away from as many as 2.8 million Arizonians with preexisting conditions,” Harris said, referring to a key element of Obamacare.

Harris also encouraged Arizona residents to vote early, by mail or in-person, for Mark Kelly, who is trying to unseat Republican Sen. Martha McSally. Kelly is leading in the polls, although his lead has narrowed.