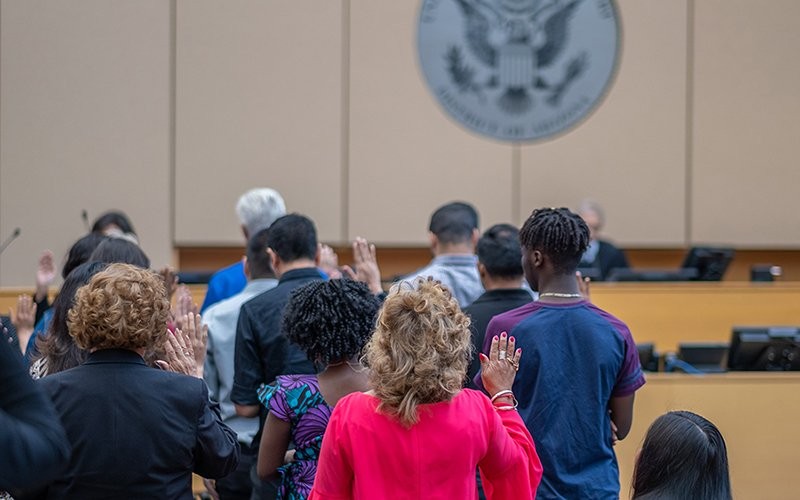 WASHINGTON – Arizona nursing assistant Perla Macias dreamed of the day when she would be sworn in as a citizen after 15 years living in the U.S. – followed by a big family celebration afterward.

She was on the verge of realizing that dream when it was derailed for six months this spring, first by COVID-19 and then by budget cuts that severely limited U.S. Citizenship and Immigration Services’ ability to function.

Macias, who only needed the interview that would let her take her citizenship test, was one of hundreds of thousands of would-be citizens who had their dreams of becoming a citizen put on hold this year.

Agency officials cannot say how many people are in the backlog for citizenship required tests, but a spokesperson said recently in an email exchange that USCIS expects to naturalize 600,000 new citizens this year – down 28% from last year’s 834,000 new citizens.

“I was literally a week away from my appointment and everything was closing and shutting off,” said Macias, whose application eventually moved forward. “I was very scared and emotional. Because this is something I’ve been waiting for basically my whole entire life since I was 6 years old.”

When she applied for citizenship in February, her friends told her this final leg of her journey to become a citizen would be “ridiculously fast.” But then COVID-19 hit.

Macias received a message from USCIS offices on March 18: “due to unforeseen circumstances, we have had to cancel the previously scheduled interview.”

“We will advise you of any further action taken on the case, including any rescheduled interview appointment information, under separate notice,” the USCIS message read.

That separate notice did not come from USCIS for nearly six months.

USCIS admits that production is down due to budget cuts and the pandemic, yet maintains the agency is “completing more citizenship applications, more efficiently and effectively, and outperforming itself as an agency,” the spokesperson said.


There were more than 675,000 naturalization applications pending in the second quarter of this year, 25,000 since the first quarter. But the spokesperson’s email noted that that is still a smaller backlog than the agency was handed by the Obama administration.

“USCIS continues to naturalize candidates from the pending naturalization caseload, which skyrocketed under the previous administration, more than doubling from 291,800 in September 2010 to nearly 700,000 by the beginning of 2017,” the spokesperson said.

But the agency faces new challenges. As its business has dropped off, so have its revenues, 98% of which come from fees for services.

USCIS Deputy Director of Policy Joseph Edlow asked Congress in August for $1.2 billion to stave off furloughs of as much as 70% of the agency’s staff.

But Democrats on the House Appropriations Committee said they wanted the agency to avoid furloughs through other measures before they would approve discretionary spending. Evan Hollander, a spokesman for committee Democrats, also said that Democrats wanted any new USCIS funding to be tied to a new COVID-19 relief bill.

“Unfortunately, Republicans are refusing to meet Democrats halfway and continue those talks,” Hollander wrote in an email.

The agency announced on Aug. 25 that it would head off threatened Aug. 30 furloughs, but at a cost – what Edlow described as drastic cuts that would affect all agency services.

At least one think tank said the agency’s wounds are partially self-inflicted. The nonpartisan Migration Policy Institute reported that USCIS has shifted funds under the Trump administration toward enforcement and anti-fraud efforts.

But the USCIS spokesperson said the agency is committed to doing the best it can, adapting its services to continue to “proudly naturalize thousands of new voters on a daily basis.”

The USCIS has started “curbside and drive-up ceremonies” for example, “that allow applicants to stay in their cars as they take the Oath of Allegiance” while adhering to safety protocols.

“Our first priority was to conduct naturalization ceremonies for those whose ceremonies were postponed due to the temporary COVID-related closures,” the agency spokesperson said.

From June 4, when some offices reopened, to late August, about 110,000 people were naturalized, the spokesperson said.

Macias finally got her letter in early September and was naturalized Sept. 15 – the same day as her interview and her test.

She said she did not want to become a citizen just for herself. She wanted to do it for her community, her family and her brother with a mental disability.

Macias plans to start her brother’s citizenship process as his notary – “lawyers are extremely expensive” – and then she’ll start her parent’s application next.

Now, she’s finally achieved her dream 15 years in the making.

“Getting my citizenship is obviously one of the dreams of my life ever since I left Mexico. Even though I was young, I understood that we were going to go look for a better life,” she said. “But at the same time, it’s kind of hard not to be mad that they left me for six months like nothing.”