System could help tribal members past – one – voter registration hurdle 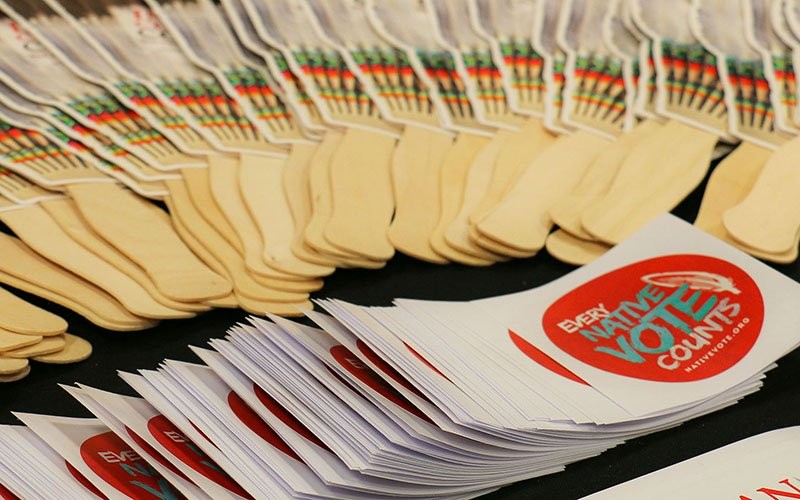 WASHINGTON – Advocates said a new policy that lets Arizona residents without traditional street addresses register to vote online is not perfect – but it’s a vast improvement over the old process.

“It’s critical,” Navajo Nation President Jonathan Nez said of the change this month by the Arizona Secretary of State’s office. “This is a very important election, I think, across the country, and we want our votes to be counted.”

The change allows prospective voters with nontraditional addresses to still register online with the use of “plus codes” – latitude- and longitude-based location codes that can be used to identify homes without street addresses.

Before the change, Arizona voters could not register online with nontraditional addresses like post office boxes or general-delivery addresses. That disproportionately affected rural tribal communities in Arizona, where just 18 percent of Native Americans have home mail delivery, according to a 2020 Native American Rights Fund report.

Nez said last week that a “super-majority of our Navajo people utilize the post offices to get their mail. There’s no residential addresses, no street addresses here.”

The new policy was announced Sept. 4 by Arizona Secretary of State Katie Hobbs, whose “office is continually working to ensure a more inclusive process,” a spokeswoman said.

Alex Gulotta, Arizona state director for All Voting is Local, said Hobbs “should be congratulated because, this late in the cycle, this close to the deadline, they are implementing a fix that … will allow people with nonstandard addresses to access a system they haven’t been able to access.”

Hobbs’ office said it had already successfully processed registrations with non-standard addresses and plus codes in the days after the change.

But Native advocacy groups said that within days of the change, they had heard of at least one person for whom the new system failed, said Travis Lane, assistant director of the Inter Tribal Council of Arizona.

Lane said he expects the system to have problems, but “because it’s the only option that we have, we are promoting it.” Hobbs’ office has provided Native voter advocacy groups a special link that can help tribal members confirm whether their registration went through and the office will send out a paper form to people who report problems.

While the change could solve one major voter registration challenge for Native Americans in Arizona, non-traditional addresses are only one of 10 common barriers tribal members face when registering, according to the Native American Rights Fund’s report. Other challenges include limited internet access and lack of day-of in-person voter registration at polling stations.

Nez said he was happy to see the change but worried that, since it came “late in the game,” people may have tried to register earlier and been unsuccessful. He said his office will continue letting Navajo voters know they can still register, including online.

Usually, Gulotta said, the fix might not have made a big difference for tribes since most Native voters register in person due to poor internet connectivity on much of reservation land. But COVID-19 has hit tribal communities particularly hard, and shuttered traditional in-person registration sites and events.

Given this reality, providing tribal communities a registration avenue that didn’t exist before “could make a measurable difference,” Gulotta said.

Nez said the tribe has set up drive-up wireless hotspots in communities for tribal members to use for any number of needs, like registering to vote.

While the update is worth celebrating for the upcoming election, Gulotta said Arizona’s online registration system is still clunky and should be updated, which would give the secretary’s office greater flexibility to make changes when needed.

“They were able to create a fix for the address issue that I would say is a temporary fix – but it’s a really good temporary fix,” Gulotta said.