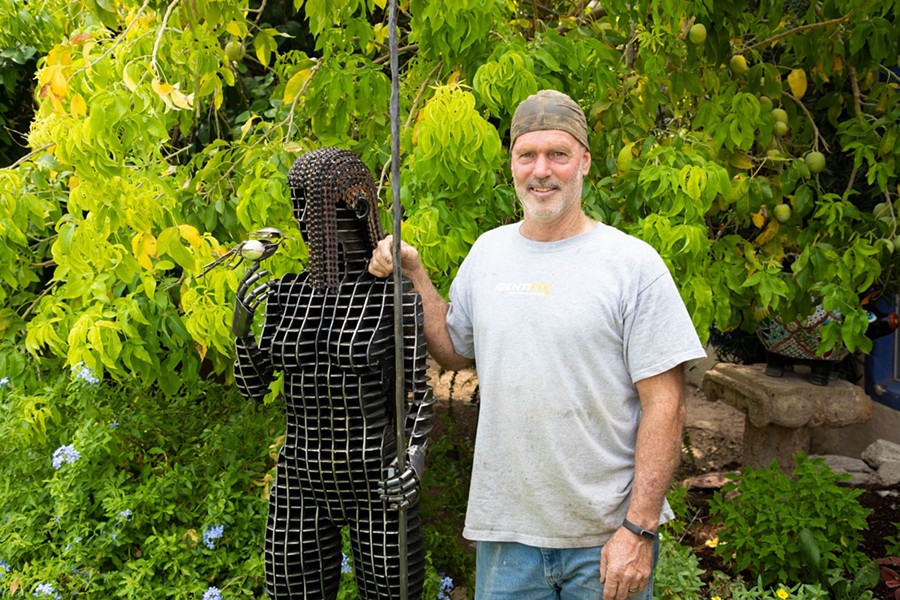 Ever wanted to see a 6-foot-tall, over 200-pound work of art that someone thought was so beautiful they decided to steal it?

The recently stolen and recovered metal sculpture known as Angelica is back on display at Hacienda del Sol Guest Ranch Resort's inner courtyard from 8 a.m. to 8 p.m. through Saturday, Sept. 12. Artist John Benedict will be on hand to meet with guests on Friday, Sept. 4 and Saturday, Sept. 12 from 6:30 p.m. until 8 p.m.

Benedict said the return of his art was “remarkable,” considering he thought the case had gone cold—Angelica was stolen last May during a pop-up drive-thru art exhibit at the resort. He said the exhibit was intended to help local sculptors affiliated with SculptureTucson, a non-profit organization dedicated to furthering the profession.

“It was a good concept but it had a slight flaw,” Benedict said.

The guest ranch’s parking lot—where the drive-thru art exhibit was held—had recently been renovated. Electricity needed for lighting and security cameras in the area had not been restored at that time.

“Hacienda del Sol did everything they could. They had someone sitting out there in a car for the majority of the time,” Benedict said. “I believe the person who did this was an opportunist who waited for the right time when no one was around, dropped his tailgate, popped it in and drove away.”

The metal sculptor also said he isn’t mad at the man accused of stealing Angelica, 56-year-old Kelly Friedman. Friedman was arrested and charged with felony theft after an anonymous tip led the Pima County Sheriff’s Department to an eastside storage unit belonging to the 56-year old. Sheriff’s deputies served a search warrant and the sculpture was located.

“I heard second hand from a detective who was present at (Friedman’s) interview that he absolutely fell in love with it,” Benedict said. “I take that as a compliment but you don’t steal it. I’m not mad at the guy, though. I’ve done things I’m not proud of.”

Benedict said the multiple friendships forged and strengthened over the two months the work of art was missing is the experience's silver lining. The sheriff’s department and Hacienda del Sol both went out of their way to locate the lifted sculpture, said the artist.

“I have huge respect for the community of people who made this happen,” Benedict said. “The person who called in the tip didn’t even know there was a reward. They did it out of the goodness of their heart.”

Saturday, Sept. 12, will be the last chance for the public to view Angelica before Benedict sets the sculpture in her new home on the art walk in front of his residence. Benedict’s wife encouraged him to keep Angelica since the work has such a unique story.

“I was asking my wife what I should do with it? Should I put it back on the market? Should I donate it?” Benedict said. “She shook her head at me and said we should keep it because of the amazing story. So, I poured a concrete pad in the front yard and I’m going to bolt her down after the exhibit.”