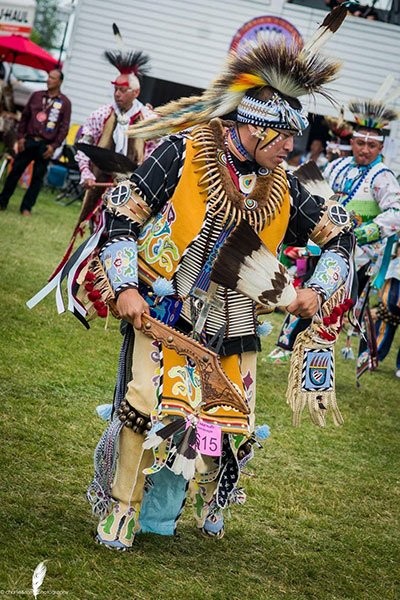 PHOENIX – Singing, dancing, socializing, sharing food – the elements that make powwows an essential part of preserving Indigenous culture are the same ones that make them a coronavirus risk.

Native communities throughout the country have cancelled the traditional gatherings indefinitely as a result. But Tiny Rosales, a member of the Ojibwe tribe, has found a way to “to keep the people dancing.”

Four months later, “Quarantine Dance Specials 2020” has more than 71,000 members and hundreds of video submissions from Indigenous dancers in Canada and the United States.

“Some (Native) people are having a hard time right now” as the pandemic continues to spur cancellations and limit gatherings, Rosales said.

“These specials are not a powwow … but it does feel good to be able to get dressed and put our outfits on and dance.”

Founder: Dance a source of joy, healing
Rosales described dancing as a “way of life” for Indigenous communities.

Getting ready for a performance is no small feat, however. Powwow dancers can spend hours practicing and preparing their attire.

Participants in virtual dance specials devote comparable time and effort to their performances. But instead of dancing in front of a crowd, they film and upload videos by a judging deadline, using the hashtag of the event in which they’d like to compete.

Competitions range in size and nature, as sponsors include everyone from families celebrating birthdays to businesses offering cash and other prizes. Prospective hosts contact Rosales with competition ideas and any rules or requirements and frequently serve as judges later.

CINC got involved after COVID-19 forced officials to cancel the school’s scheduled graduation events, for instance.

“It was difficult to provide a traditional honoring ceremony for our students,” spokeswoman Faith Morreo said. “We felt this would be a special way to honor them and the Class of 2020.”

School officials also wanted to uplift the Native community at large during this time of suffering, she said, and recognize the perseverance of Indigenous people who adapt to keep their culture alive.

“It makes all of us proud to know we can be innovative as we find ways to continue our educational mission, keep our cultures thriving, maintain a positive outlook and provide a way for everyone to gather virtually,” Morreo said.

“We are sharing hope, good dancing, good singing and overall good feelings to keep our spirits up during this time.”

‘There’s meaning behind everything we do’
Natha Little Crow, an Otoe-Missouria dancer who won a different graduation special sponsored by a Lakota Sioux family, described competing virtually as a “really meaningful” experience both for herself and the broader Native community.

“I’m keeping the culture alive and reminding people what it was like to have these gatherings and why we have them,” she said of her decision to participate.

Juaquin Hamilton-YoungBird, historical ambassador for the Sac and Fox Nation and emcee for the Facebook group, similarly said the virtual space had allowed him and other Indigenous people to “stay connected” during months of isolation.

When COVID-19 first began to spread across the U.S., he said, it was devastating not knowing whether the pandemic would strip his tribe of its annual gatherings.

“We were all planning our spring powwows, our summer powwows,” said Hamilton-YoungBird, part of the Native dancing and music arena for 42 years. “Everybody was holding on to their hope that nothing would get canceled.”

Though the virtual competition format “was something new for all of us,” he said, it allowed Native dancers to preserve their traditions.

Hamilton-YoungBird’s knowledge of various styles of music and dance – his band was nominated for a Grammy for Best Native American Music Album in 2002 – prompted families from throughout Indian Country to ask him to announce the winners for their virtual specials, he said.

Hamilton-YoungBird commended the group’s ability to provide non-Natives a window into Indigenous culture, even if visitors “don’t quite understand” all of those meanings. In some ways, the page has taken the place of the powwows tribal communities had occasionally opened to non-Native attendees prior to the pandemic.

The group also has drawn attention to struggles faced by tribal nations during the pandemic, according to Rosales, its founder. Some dancers have chosen to spotlight especially hard-hit Native communities in their video posts.

“I think that’s really a good thing, because there’s so many different people on the Quarantine Dance Specials page from all different walks of life,” Rosales said. “… A lot of people don’t even know we exist.”

This story is made possible through a partnership between the Walter Cronkite School of Journalism and the Center for the Study of Religion and Conflict at Arizona State University, with the support of the Henry Luce Foundation.